In "state of the city" address, mayor-elect says improving transit, housing are priorities, urges residents to support Pan Am Games 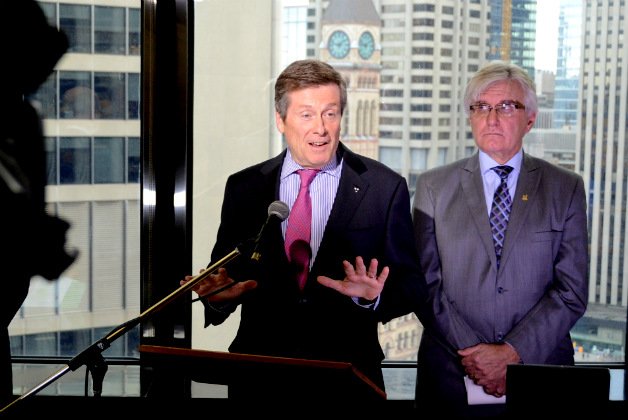 John Tory isn’t wasting any time getting down to the nuts and bolts of running this city.

The mayor-elect has spent the past month meeting with senior public servants to get a better understanding of the government’s inner workings, and on Thursday, it showed.

Four days before he is scheduled to take office, Tory held a press conference to outline what he sees as “the state of the city.” Over the course of 45 minutes, Tory stood in his transition office on the 15th floor of City Hall and spoke at length and in detail about what he believes are the major challenges facing Toronto, demonstrating that despite never having sat on council he has a solid grasp of the issues that need addressing (even though he may not have concrete plans to solve them.) The address sounded like a depoliticized, more fine-tuned version of his winning election platform.

Although he refrained from criticizing outgoing Mayor Rob Ford directly, he hinted at the dysfunction of the previous four years and said that the coming term was an “opportunity to re-engage respectful and productive relations” with council, the public service, and the federal and provincial governments.

“I realize that many of the challenges we face are great,” he said, “but I’ve also never been more optimistic about what we I think we can achieve together when we work together.”

Here is the State of the City, according to Tory:

Saying that the TTC is “still reeling” from budget cuts imposed in 2011 and 2012, Tory said he’s asked TTC CEO Andy Byford to look at ways to restore service on 41 bus routes that had their service reduced, and to return loading standards to 2004 levels in order to reduce overcrowding. Doing so would require finding new buses to replace ones that were retired or scrapped under Mayor Ford.

Tory said the restoration of service would be “subject to our ability to pay for it” but would not say if this could mean breaking his campaign promise to freeze TTC fares next year. “I’m not saying anything now,” he replied when asked about the pledge. “You heard what I campaigned on, so that stands on the record.”

Tory also wants Byford to speed up work to upgrade subway signals on Line 1, which was originally supposed to be complete by 2012 but is now scheduled for 2020. He said that “work continues as planned on all LRT projects” and the Scarborough subway extension, and “detailed analysis” of his signature SmartTrack proposal has begun.

In addition to transit and gridlock, housing was one of three issues to which Tory affixed the “crisis” tag. To all the well-known stats about the deterioration of public housings stock, he added another: 4,000 Toronto Community Housing units will become uninhabitable by 2018, unless the provincial and federal governments commit to funding $1.7 billion worth of repairs.

He also noted the use of homeless shelters has increased 8.2 per cent since 2010, something he attributed partially to the “disgraceful” lack of care for people with mental illness.

In a sideways jab at Mayor Ford, Tory said that dialogue with other governments to secure funding for these issues had been “basically non-existent” over the past few years. “I will be moving to change that,” he said.

Tory said that child poverty rate, which a recent report pegged at 29 per cent, “unacceptable to every Torontonian.” City staff are bringing forward an action plan as part of a council-approved poverty reduction strategy, and Tory said he wanted “to personally bring focused leadership to this area to provide as much measured improvement as possible.”

Although the 2015 Pan Am Games are already being heavily criticized, Tory said he believed it is “crucially important” for Toronto that they succeed. He issued a plea to the public: “Get behind this event, and don’t fall prey to the temptation we often have as Canadians and Torontonians to put these kind of things down.”

He did quibble with the province’s transportation plans for the games however, saying he would ask Queen’s Park to reconsider its intention to introduce special HOV lanes a full 11 days before the games begin, and to reserve them for vehicles with three or more occupants. The Games’ transportation needs must be met “without grinding the city to a halt,” he said.

In the past few years, controversy around police use of force, carding, and the force’s budget have contributed to an unhealthy atmosphere around the police department. Tory said he is “not at all satisfied” with the current tensions between the force, the Police Services Board, and the wider community, and he believes the uneasy relationship between the three has undermined public confidence in law enforcement.

Tory pledged to take a personal role in ensuring that “everyone involved, without exception, focuses positively on the continuous reform and updating of police practices so that the entire community can at all times be confident in our police service.” He said he had not yet decided whether to sit on the police board to directly influence reform.

The mayor-elect reiterated that he believes congestion is “at the level of crisis.” Parking enforcement officers issued 131,400 fewer tickets in 2013 than they did in 2012, and Tory said he believed “much more vigorous” enforcement would be part of the solution to gridlock.