Tory promised to stay out of Rogers-related matters at Council. But using his position as mayor to write a letter to cabinet? Well, that's different. 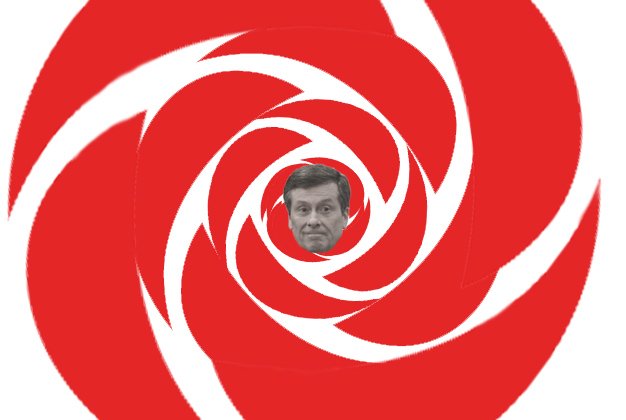 On the afternoon of Thursday, February 4, City Council was confused. This was not a terribly unusual state of affairs, but the particular circumstances were.

Councillors were debating a motion from Mike Layton concerning “competitive and affordable internet prices.” It asked Council to express its support for a July 2015 decision by the Canadian Radio-television and Telecommunications Commission (CRTC) requiring big telecom corporations to open up their next-generation networks to smaller companies at wholesale prices. Just as internet service providers like TekSavvy are now able to make use of current Bell and Rogers lines to offer their own products, the July ruling extends the conditions to the newer, higher-speed infrastructure that is now being built out.

“So I read in the paper that the mayor has taken a position on this matter,” said Councillor Janet Davis, who wanted to understand the particular context.

Assuming that Davis must be mistaken, speaker Frances Nunziata reminded her of what item they were discussing.

Davis, however, knew what she was talking about.

Unbeknownst to the speaker, Mayor John Tory had indeed taken a position. In his official capacity, he’d written a letter to Prime Minister Justin Trudeau’s cabinet in support of Bell’s petition to have the CRTC’s decision overturned.

This came as news to the speaker, to the city solicitor, and to the vast majority of councillors who found themselves having to wrap their heads around federal telecommunications regulatory policy on the fly. Few had seen the letter from the mayor some even expressed skepticism of its existence.

You can read a pdf of it here.

Tory’s letter and Layton’s motion pertain to — and take contrary positions on — a policy in which Bell and Rogers have a direct stake. And although he resigned from the board of Rogers Communications just prior to taking office, Tory remains involved with various Rogers entities including the Rogers Control Trust that oversees the controlling shares in the company [pdf]. He also, as of 2014, owned stocks worth just under $6 million at today’s prices.

The Municipal Conflict Of Interest Act (MCIA) prohibits council members from voting on or speaking to items in which they have a direct or indirect financial interest. And so two days before he became mayor, Tory put out a statement saying that he’d recuse himself from “matters involving a Rogers-controlled company, whether or not I am required to do so under the Act. My office has developed a framework for monitoring and proactively addressing any potential issues” that could arise.

Luckily for Tory, he left to attend the Big City Mayors’ Caucus in Ottawa early Thursday afternoon and so didn’t have to face the issue at the Council meeting, which is the only place the MCIA applies. But if he’d remained at Council and felt compelled to recuse himself from the matter, that would presumably have been an acknowledgement that his previous involvement in the issue was at the very least improper.

Councillor Shelley Carroll, for example, declared an interest on the item and left the chamber because her husband works as a technician for Rogers-owned Citytv.

When the question of Tory’s federal intervention was put to him by reporters that morning, he tried dismissing the Rogers angle in a couple different ways.

First, he explained that he was “only asked to write a letter for Bell.”

In a superficial sense, this is true. Within 90 days of a CRTC decision, anyone can petition cabinet for it to be reversed. That’s precisely what Bell did last fall, triggering a 30-day window for written comments from the public. Mayor Tory’s letter, dated December 17, made it in just under the wire. It makes no reference to Rogers but has specific mention of Bell.

So it’s accurate to say that Tory was writing in support of Bell’s petition, but it’s on an issue in which Rogers has an exceptionally well-documented interest.

When the CRTC held its original hearings on the policy in 2013 and 2014, Rogers weighed in heavily. In an oral presentation in November 2014 [doc], Rogers suggested that the CRTC should butt out of the wholesale market altogether, stating that such regulations “ultimately harm Canadian consumers. The Commission should migrate to a wholesale regime which is more market-oriented and sustainable.”

And while Rogers didn’t submit any comments on Bell’s petition, it’s taken a stand on Bell’s secondary appeal of the decision that asks for amendments to the final policy.

When the Star’s Jennifer Pagliaro pointed out Rogers’ interest to Tory, he countered that his stance on the issue was a sincere matter of principle to him. This is consistent with a recent interview he gave to Canadian Business’s Peter Nowak, in which he prefaced his position by describing himself as a “free enterpriser.” But in the same interview, Tory also explained that his view has been coloured by conversations with Rogers:

Part of the reason that Bell and Rogers and Telus charge the rates they do is they’re recovering the costs made over a long time of capital investment. And by the way, it’s not capital investment that has stopped.

I’ve talked to them both recently, Bell and Rogers, and look at Bell. They’re investing a billion dollars in taking fibre [optic cables] further out into the system.

It appears that a mayor affiliated with Rogers spoke to people at Rogers about an issue on which he would soon intervene in an official capacity.

Asked whether Tory would have declared an interest had he stayed at the meeting, spokesperson Amanda Galbraith told NOW that he would not have, “because he sent the letter” and therefore didn’t consider his input to be inappropriate.

You obviously can’t hold someone to account for a hypothetical, but municipal law expert John Mascarin believes that had Tory been at Council, he “ought to have declared a pecuniary interest” unless one of the law’s prescribed exemptions —  such as that concerning “remote or insignificant” interests — applied.

“The test,” he writes in an email, “is whether a reasonable elector apprised of ALL the circumstances would believe that the council member could be influenced. On that basis, I think the Mayor would have a potential plausible ‎defence.”

Government sometimes turns into a vortex of laws and procedures from which there’s little escape. On other occasions and against all odds, however, politicians manage to navigate or fumble their way out.

In its wisdom, Council ended up adopting Layton’s motion, by a vote of 28-5.