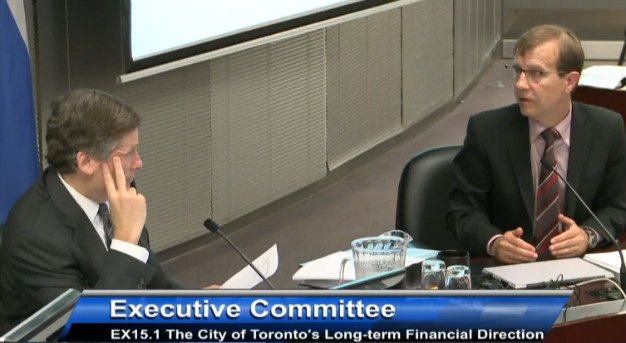 At the debate's conclusion, Mayor Tory summarized the larger discussion: "We actually are being honest with people. And that's the most important thing. We're being honest about the true state of the City's finances. I wanted that. And I welcome that as much as sometimes it's tough to listen to the medicine being administered by my friend next to me, the City Manager."

Mayor John Tory, like Mayor Rob Ford before him, believes the City of Toronto has a spending problem far more than it has a revenue problem.

But City Manager Peter Wallace, like senior civil servants before him, is pretty darn sure that the opposite is closer to the truth. So he wrote a report on the City’s Long-Term Financial Direction in an effort to spell out his case. In essence: in order to keep property taxes artificially low, the City has contorted its budgeting into an unsustainable mess that relies on deferring major expenditures, increasing user fees (e.g., TTC fares), and praying that the real estate market never, ever falters, lest windfalls from the land transfer tax suddenly cease.

On Tuesday, Wallace presented this report to the mayor’s Executive Committee, whose members had trouble wrapping their heads around its premise. For Tory and most of his allies, low taxes are sacrosanct and government waste is a given. So they were not about to let a few charts — or even a drawing of an iceberg — upend their worldview.

This conceptual discrepancy was perhaps most apparent when the mayor had an opportunity to question Wallace about his conclusions. Under layers of euphemism and expertly sublimated frustration, the two individuals in charge of City Hall fundamentally disagreed on what ails it.

Here is an edited transcript of their exchange, accompanied by translations into more commonly understood human language — an honest account of an honest conversation about the City’s finances:

Mayor John Tory: Do you think it’s off again? The air conditioning? I feel something coming… Maybe that’s what I’m feeling, it’s you know, the…

Tory: City Manager, if I might just ask you some questions. Because I think the impression might be left from your presentation and your answers today that the entirety of where we are on the operating budget is because of decisions made to restrain the growth in property taxes and there’s been no contribution from the fact that Council meeting after Council meeting for the same decade you refer to, people have — without any thought of how it could be paid for — increased services?

City Manager Peter Wallace: So I apologize, Mayor, if I left that impression. [He calls up the below slide.] Basically, it is very clear that over time expenses have grown. While it’s grown moderately, it’s grown as a function of basic core cost drivers, inflation. And then Council’s desire to add incremental spending over time. 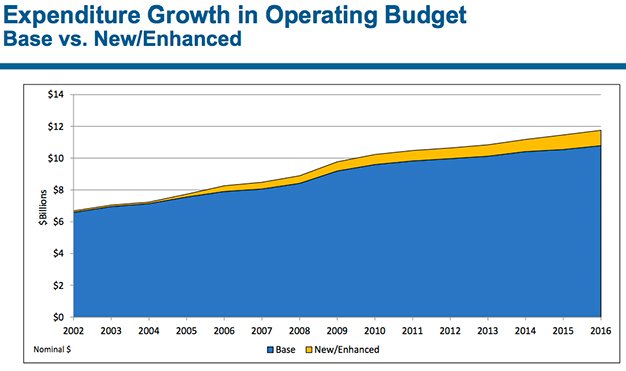 (Translation: Yes, City expenses have grown, but that growth is negligible in the scheme of things. No matter what you might want to believe.)

Tory: And even in the last number of years, from 2011 to 2016, there has been an increase that, I guess, in most of those years has run above the rate of inflation. Is that correct?

Wallace: Um, it’s probably at right about the rate of inflation.

Tory: Now one might have been excused if they were left with the impression from your earlier answers that there really are no efficiencies to be found. But I’m assuming you’d agree that through things like technology, review of span of control, review of who does what, meaning what role government plays… I mean, in a government of $14 billion in total, there must be — not only just tiny, tiny things that can be done better but substantial things that can be done better.

(Translation: But surely we can fix the City budget by cutting the waste. Please validate my premise.)

Wallace: So expenditure control does work. The City of Toronto has had annual targets. They have generally provided savings. And it is certainly my view that there are incremental opportunities for savings, and we will realize those. The only concern I have is that Council not assume that the totality of the fiscal challenge can be bridged on the basis of efficiencies alone.

(Translation: No. No no no no no. We already find efficiencies every single year, and you’re kidding yourselves if you think that’s the answer. Jesus, you people.)

Wallace: The only other challenge I’ll put on that is that this conversation around efficiencies needs to be broadened to include the agencies as well, and they are the proximate source of pressure going forward.

(Translation: If you really must shunt off responsibility to someone else, blame the City’s agencies. Oh, what’s that? You sit on the Police Board?)

(Translation: Nothing you said registered.)

(Translation: Isn’t there some way to blame Miller and Ford?)

Wallace: [pulling up the below slide] So these represent expenditures that have already been committed. So these are base operations and when we say “base capital,” that’s the existing capital projects. Whatever share of $29 billion, whatever fraction of that were brought forward, would then be incremental to these numbers. So this is essentially the pressure for the 2016 level of services carried forward into 2017 and out-years. 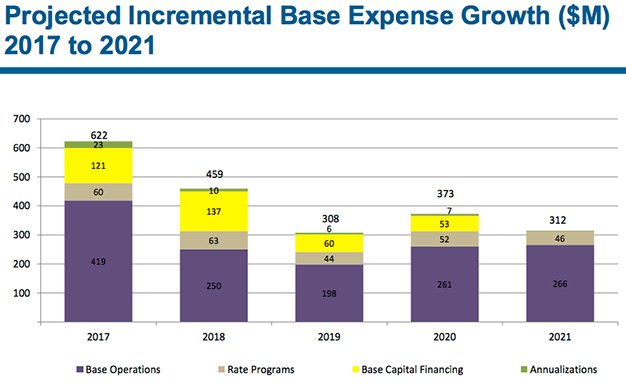 (Translation: It doesn’t matter, expenses will continue to grow and this is your problem now.)

Tory: But you would agree that, say that “419” — while I realize there are numbers in there that seem intractable — that that number’s going to come down. I think you suggested that yourself earlier.

Wallace: It will absolutely come down substantially. What I’m concerned about is that there are two elements of it, TTC and Toronto Community Housing, that as a result of my conversations with the agencies, they seem less likely to come down than some of the inflationary pressures that the City divisions have traditionally been able to strangle.

(Translation: Don’t count on things getting a whole lot better. I mean, look at me, I’m using the word “strangle” to describe a positive outcome.)

Tory: Again, one could have concluded listening earlier on that you felt that increasing the property tax — and property taxes that should have been increased in prior years and so on and so forth — was the only way to deal with this. And I’m assuming, given that you’re bringing forward a report on revenues, including some that I assume will have substantial potential revenue impact, that you are not in fact saying that this has to be done through the property tax.

Wallace: Not by any means. And to be very clear, I respect and understand the will of Council, and I understand clearly that Council has placed a very high, very high priority on maintaining property tax rates at a low level and maintaining property tax consistent with or even below the rate of inflation. That’s true historically. It’s likely to be true going forward as well.

(Translation: The most obvious and effective solution to all your woes is sitting right in front of you, but you’re too ideologically stubborn to embrace it. I don’t know what more I can say to you people.)

(Translation: You need to bring in more revenue! Whether through property taxes or revenue tools, just pick something to start! I mean, I guess you could consider asset sales, as well…)

Tory: Thank you very much. My time is exhausted.

(Translation: I heard “asset sales”! I think we have a plan. Thank you for validating my premise.)