Mayor-elect steps down from Rogers board, says he will declare conflicts on issues related to family businesses 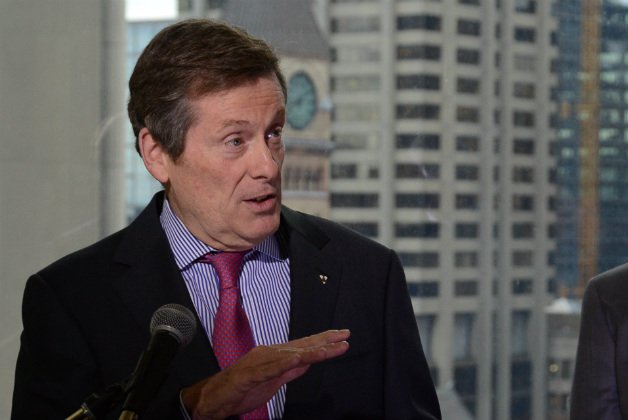 John Tory will take no part in the debate over the proposed expansion of the island airport, and has resigned his seat on the board of Rogers Communications.

The mayor-elect made the announcement in a press release late Friday afternoon that outlined how he intends to avoid potential conflicts of interest between his family’s various business activities and his new role at City Hall.

“Avoiding conflicts of interest is extremely important and that responsibility rests with me and my office,” he said in the release.

After seeking advice from lawyers and the city integrity commissioner, Tory said he plans to declare conflicts on anything arising from: his son’s position as CEO of a private airline his wife Barbara Hackett’s property-fixing business and his own continued involvement in Rogers.

The mayor-elect’s son, John A.D. Tory, operates Private Air Inc. out of Billy Bishop Airport, and has publicly backed a controversial plan to extend the airport’s runway and allow jets to fly from the facility. According to the city lobbyist registrar, he is still an active lobbyist on the file.

The expansion plan is expected to come back to council sometime next year, and the outcome of the vote will have a major impact on the future of the city’s waterfront.

The decision to declare a conflict means that Tory will be unable to vote on the issue or take part in discussions about it at council. It also goes against his camp’s initial statements on the subject – in April Tory’s spokesperson told NOW the idea that his son’s airline would force him to recuse himself was “ridiculous.”

The incoming mayor has also resigned from board of both Rogers and Metro Inc., but will retain a seat on the advisory committee of the Rogers Control Trust, which oversees Rogers’ major transactions. He will also stay on as a trustee and director of “various Rogers family-related trusts and private boards,” according to the release.

Tory said he felt obligated to keep some of his Rogers positions because of a promise he made to Ted Rogers, the late president and CEO of the communications giant who was a good friend of Tory’s. He died in 2008.

“Before his death, I gave my word to Ted Rogers that I would act in this capacity so long as I was able, and out of a sense of moral obligation to my late friend, I do not intend to resign from these positions,” Tory said, adding that he would declare a conflict on any issue involving a Rogers-controlled company.

In addition to declaring conflicts, on the advice of integrity commissioner Valerie Jepson Tory said his office “has developed a framework for monitoring and proactively addressing any potential issues that could arise” from his and his family’s business interests.

“ I am confident, and my legal counsel agrees, that these steps allow me to be in full compliance with the law and, in some cases, exceed its requirements,” he said.

Shortly after Tory’s announcement, NoJetsTO, an activist group that opposes the island airport expansion, issued a press release of its own saying it “welcomes” his decision to declare a conflict on the jet issue but still has serious concerns about two of the mayor-elect’s staffers who used to work for the Sussex Strategy Group lobbying firm.

NoJetsTO, which also raised concerns about Tory’s endorsement of pro-expansion council candidates during the municipal election, says it’s concerned about the two staffers’ “potential meddling” in the airport debate.

“With two former Sussex lobbyists working as Tory’s senior staff, firm steps are needed to make sure they don’t influence city council behind the scenes,” said Norman Di Pasquale, the group’s acting chair. “It’s not just John Tory his staff has to stay out of the jets issue – period.”