John Tory wins, so what’s next?

Is it possible our city is more divided than it was after Rob Ford's improbable win in 2010? 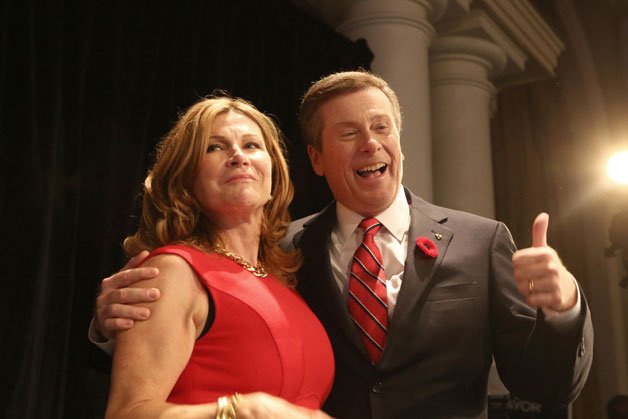 For a few minutes at John Tory party headquarters election night it looked like the Fords might spring a pre-Halloween surprise and ruin the coronation that everyone had been predicting. The early returns between Tory and Doug Ford were frighteningly close, within three percentage points. Even with the TV screens posting results showing Tory ahead, there was a hush over the crowd,

But by around 8:25 pm, less than an hour after polls closed, it ended just as pollsters said it would, with Tory declared the 65th mayor of Toronto, besting Doug by a margin too close for many who thought election 2014 was about exorcising the ghost of the Fords. Is it possible our city is more divided than it was after Rob Ford’s improbable win in 2010?

Tory offered in his victory speech that his win is a sign that the city is more together now than ever before. The sign behind him on the stage read One Toronto and #Together.

But look beyond the 60,000-vote margin and to areas of the city Tory won compared to Ford, and a different picture emerges. It’s haves versus have-nots folks, more than it is city versus suburbs.

And just to make sure we all knew it, it was Rob Ford who took the mic before Doug made his concession speech to suggest he’ll be back running for his former mayor’s job in 2018. Rob won his old Ward 2 council seat after his cancer diagnosis caused him to drop out of the mayoral race.

But for Tory: what a difference 10 years makes. It was that long ago he ran for mayor and lost to David Miller. Back then it was the fair-haired Miller who more or less had Bay Street’s blessing. This time, mountains were moved to ensure a Tory victory. Check the dream team behind Tory and the who’s who of campaign donors who’ve contributed a cool $2.5 million to his campaign.

After four tumultuous years of Ford, the city’s powerbrokers got behind the safe bet. There was also the conservative brand to think about. Who else but Tory? Easy to forget when it looked like Rob Ford was a lock to win in 2010 that Mike Harris’s boys at Cassels Brock, the law firm famous for ordaining mayors, tried to urge Tory to run at the 11th hour to try and head off Ford at the pass. The timing wasn’t quite right.

But Tory couldn’t have won this time without the Liberal machine behind him as well as this business buds in the PC party, which may complicate matters at City Hall when lobbyists and kingmakers start showing up cap in hand looking for favours. But let’s leave that for another day.

The question now turns to what kind of mayor Tory will make and what direction are we headed. The short answer is it’s too early to tell.

For the province, Tory’s victory, coupled with Bonnie Crombie’s in Mississauga and Linda Jeffrey in Brampton, means the transit premier, Kathleen Wynne, can get on with her Big Move transit plan for the GTA. What did you think Tory’s SmartTrack plan to run surface rail on existing GO lines was all about anyway? More to the point, will SmartTrack be the first step in the provincial transit agency Metrolinx absorbing the TTC? There hasn’t been much said about that. Or about what Tory is going to do to fix the funding gap running the transit system we’ve already got into the ground.

Tory’s relationship with the premier has been oft-talked about during this campaign. A major Tory selling point has been that he’s the one best placed to convince the province and feds of the need to invest in the city. But the province isn’t exactly swimming in cash. How Tory proposes to juggle it all and keep the police budget in check, the single largest ticket item on the city’s books, remains to be seen. We’ll get a clearer idea when he announces his transition team. And which members of council will fill his executive and roster of committee chairs.

A cursory check of those he’s endorsed and those who are endorsing him suggests we’ll see some of the same faces in the Ford era in positions of prominence, with a few shuffled around for appearances. Tory will have to send a strong message, after all, that he’s got his eye on the books. It’ll be a delicate balancing act and everyone will be watching for clues.

As for lefties who might occupy positions of influence, don’t hold your breath. If the way Tory ditched debates to avoid controversy during the campaign is any indication, there’ll be no chances taken with those on the other side of the political spectrum. He’ll wait till mid-term appointments to broaden his tent.

Rob Ford played the mushy middle against progressives on council for almost two years before his personal problems got in the way and everything blew up. Tory presumably won’t need to do that. With Wynne’s blessing, he’ll have most Lib types on council in his corner from the get-go, give or take.

He’ll be less hands-on and relying on his advisers to find his way in the day-to-day at City Hall, at least, in the early going. Think Mel Lastman, only smarter, smoother and with better manners.