Joshua Errett goes king can for king can with Bills fans

One surefire way to save Greece from default. 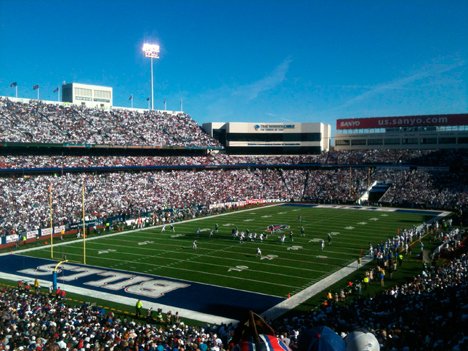 One surefire way to save Greece from default is to relocate Buffalo’s Ralph Wilson Stadium to Athens.

The place could double as the Federal Reserve, with its $8 pizza slices backing the currency. That’s what I thought as I waded into the home of the Buffalo Bills through crushed king cans of Bud, dodging NFL memorabilia peddlers.

“The NFL is an unflinching example of American creativity, dynamism and greatness,” I proudly announced when my friends and I got to our seats near the O.J. Simpson section of the end zone. But by the end of the first quarter, I suggested we spend the rest of the game in the car.

I went there to watch football, but instead witnessed the decline of the American empire.

This was all because I went to the game dressed in a sweater and jeans – “sports casual,” as I call it. My outfit could be bought at a major American retailer (not American Apparel either), and for a reasonable price.

But I was absolutely harassed. Strike that. I was menaced. Some of the names hurled at me personally by jersey-flaunting Bills fans: “sweater guy,” “sweater asshole,” “sweater hipster” and my personal favourite, “Toronto sweater asshole.” My game-day companions got it worse.

I did everything to be part of the crowd: I went king can for king can with this mob I brandished my deep institutional knowledge of the Bills and my understanding of NFL rules and regulations. But nothing worked. Heckled from kickoff onwards. That we weren’t in NFL-sanctioned jerseys made it us-versus-them.

The NFL is one league where individualism is an asset. The New York Jets’ Mark Sanchez, the opposing quarterback on this day, was on the cover of GQ because of his personal style.

Further, America was founded on independence and self-determination. It has been the most independent, innovative nation in the world for the last century.

What happens to that proud American tradition when you enter Ralph Wilson Stadium? It morphs into a scene out of John Carpenter’s They Live: conformist zombies obeying their corporate overlords.

The lazy slugs in the seats around us didn’t have a single ounce of imagination. If the Bills didn’t sell team apparel, they couldn’t even dress themselves.

If America is in fact losing its standing in the world, don’t blame Chinese currency manipulation or eurozone sovereign debt. Look to the stands at Bills home games.