Members of Rage Against the Machine, Public Enemy and Cypress Hill team up for an anti-Donald Trump presidency tour 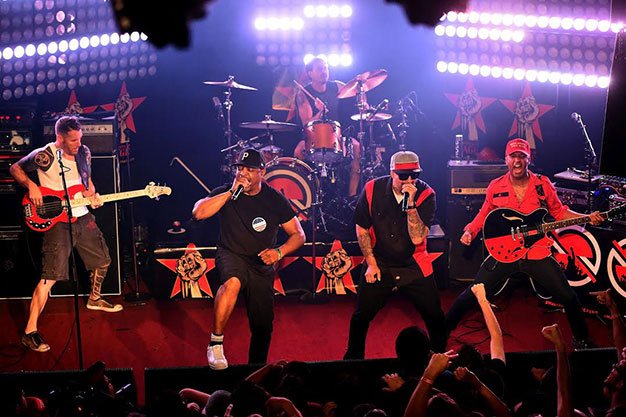 Unable to stomach the idea of a Donald Trump presidency, Rage Against the Machine’s Tom Morello, Brad Wilk and Tim Commerford have formed a supergroup with Public Enemy’s Chuck D and Cypress Hill’s B-Real to tour North America as a counterpoint to “this mountain of election-year bullshit” currently engulfing the United States.

Prophets of Rage have vowed to kick things off by causing a ruckus at a to-be-announced Cleveland venue on the same day as the Republican National Convention – July 19 – where it’s likely that Trump will be named the GOP presidential nominee. After that, the Prophets take their Make America Rage Again tour on a 35-city trek that hits Toronto on August 24.

They’ll play new material plus songs from all three bands’ catalogues. But fans of Democratic candidates Bernie Sanders and Hillary Clinton, be warned: don’t expect the leftist rap-rockers to sing their praises. Instead, the Prophets want to tap into the mood of discontent that Trump and Sanders have brought on both sides of the American political divide.

“The last time Rage Against the Machine played in Los Angeles, we outdrew Trump, Sanders and Clinton by a margin of three to one, so I think the general electorate is ready for our message,” guitarist Morello said in a recent interview with Bloomberg Politics. “What [the public is] being offered up through the tiny funnel of the electoral process is a racist demagogue on the one hand and a great dreamer on the other hand, and in the middle is the lesser of three evils. None of those choices are good enough for us. There needs to be an alternate voice, one that’s unfiltered, uncompromising and stands unapologetically with the people.”

Feast In The East: Doomsquad, No The Wind Not The Flag, Isla Craig, Pantayo at Prairie Drive Park 5-11 pm, all ages. Free. July 9.