Noodle buns plus beef patties add up to nonstop lines 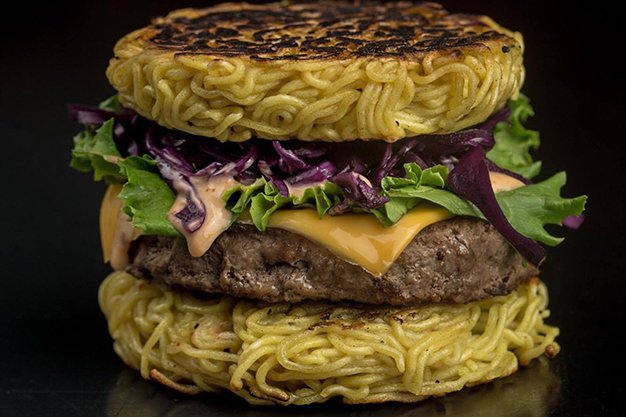 The CNE’s food vendors are again reaching for chocolate-covered, deep-fried greatness this year, with Toronto vendors piloting everything from cricket hot dogs to fried meatloaf sandwiches at this year’s fair. Cabbagetown Taiwanese snack bar Kanpai unveiled a brand-new Japanese concept and menu, and it’s doing so well at the Ex, it might soon have a permanent home.

Yatai launched with a six-item menu at the Food Building last week. Its star: the ramen burger, a food item that debuted (where else) in Brooklyn in 2013, but took its time making its way to Toronto.

“It isn’t necessarily anything new, but I don’t think anyone’s done it at this level,” says Kanpai’s Trevor Lui. “We’ve souped it up a bit in terms of the ingredients.” Specifically, there’s two Japanese ramen buns, grilled with sesame oil and topped with a five-ounce beef patty, American cheese, lettuce, pickled cabbage and teriyaki mayo.

“It’s a fun balance of texture,” he says. “People have a lot of questions – is the bun soft? It’s crispy on the outside, but then you get into the crispiness of the vegetables, the gooiness of the cheese, and then the kick of the beef patty all in one big bite.”

Other offerings include karaage (Japanese fried chicken) that’s battered and fried on the spot, “durty fries” with teriyaki butter and Japanese seasonings, and chicken-stuffed gyoza.

He adds the Kanpai team was looking at opening a second restaurant, with a location already scouted – and given the ramen burger’s success at the CNE, he’s looking at what kind of part Yatai could play in the new spot. “(The ramen burger) may become part of that. We’re gonna see how we can get this to the people,” he says.

In the meantime, fueled (largely) by ramen, the queues are coming non-stop. “We’re running double shifts every day to keep up,” Lui says.

“We’re really happy with the response, because we’ve been getting the longest lineup thus far – I think we’re trading blows with the sushi burrito (at SuBu). It’s an all out Japanese food battle.”