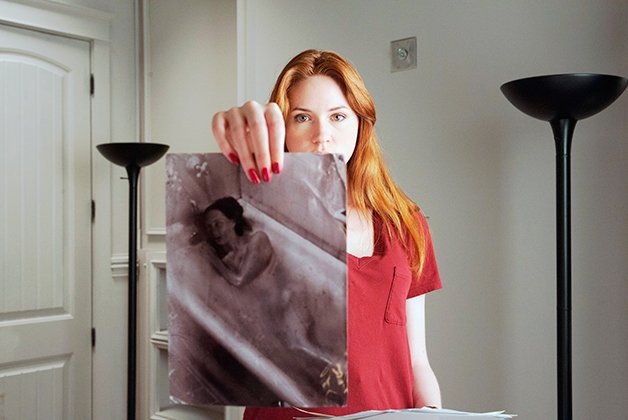 Karen Gillan is willing to get a little crazy.

As a young woman determined to prove that her parents’ deaths were caused by a malevolent mirror in Oculus, the Scottish actor plunges full-on into the role of a character so obsessed with her mission that she’s lost track of everything else.

“That’s what I loved so much,” Gillan says from her home in Los Angeles. “That was my favourite aspect of the film, actually. I thought that was just so cool and interesting, that this girl is dancing on the edge of being normal and being totally nuts. That was really fun to play with.”

Gillan, who became nerd royalty in 2010 when she was cast opposite Matt Smith as the heroic Amy Pond on Doctor Who, jumped at the chance to make a scary movie once she wrapped up her run on the show.

“I really like horror films!” she says. “I watched them growing up a lot. I mean, I wasn’t interested in doing a generic horror film where, like, a group of teenagers get killed off one by one. But this is a really interesting film even without any of the supernatural aspects. It just seemed like a good idea.”

Given that her next big role is that of a bald blue meanie in August’s Guardians Of The Galaxy, is she worried about getting stuck in the world of fantasy and science-fiction?

“I love doing genre work – I think that’s where the amazing female roles are at the moment,” she says. “The stuff you get to act in those things is just amazing. It really stretches you because of the range that’s required. You’re in life-or-death situations regularly, so it’s not like just two people chatting in a room at all. It’s high-octane, and that’s so satisfying for an actor.

“I mean, if I had to do a TV show where I was walking down a corridor pretending to be a doctor – and not like a fun Time Lord Doctor, just a real one – I think I’d be really bored.”

This isn’t to say she’s unwilling to take on more conventional projects, mind you.

“I want to do more comedy,” Gillan says. “This is the big thing for me. I just finished a pilot for ABC called Selfie, and I loved that so much. It’s about a girl who’s really obsessed with taking pictures of herself and social media, and she’s basically a complete narcissist and doesn’t understand how to have real relationships with people offline. I loved that role.”

Karen Gillan on spoiler culture, and whether the obsessive attention of Doctor Who and Marvel fans is starting to feel normal now:

Gillan on reclaiming nerd power, and the difference between geeks and nerds: