This week's class at Nelson Mandela Park Public School explores the topics of perspective and digital drawing.﻿Watch the live stream at 9 am on February 10 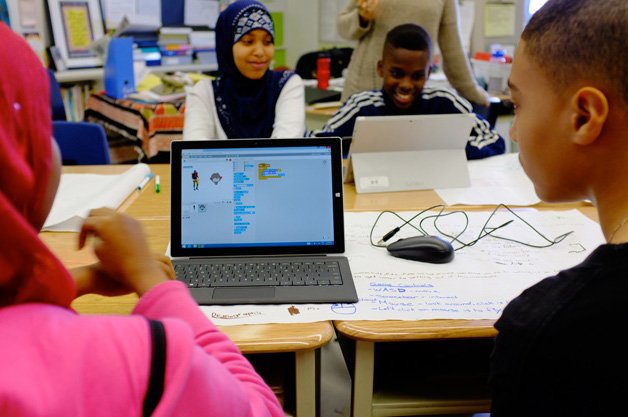 Students at Nelson Mandela Park Public School learn how to turn stories written in English class into a computer game.

Every Wednesday morning for the past few weeks, Malene Charles and Kathryn Barrett have been teaching students in grades seven and eight at Nelson Mandela Park Public School how to make a computer game. They founded Kids in Tech, a digital literacy initiative, last spring and they’re currently in the middle of a 16-week pilot program at Nelson Mandela School. On February 10, they’ll be live streaming a session from the classroom.

Charles and Barrett aren’t teachers at the school. They were brought in to help modify the current Toronto District School Board curriculum by adding digital elements. In essence: Charles and Barrett bring technical knowledge to the resources already in place at Nelson Mandela.

Plus, what they’re doing sounds like a lot of fun.

Watch Week 5’s class at Nelson Mandela School from 9 – 11 am on Wednesday, February 10. You can also watch over at Google+.

“Right now, we’re getting kids to use stories they’ve developed in English class and turn them into game,” Barrett explains. “There’s lots of crossover between technology and what they are learning in school. We go over variables, which is something they’re learning right now, and they have to learn angles to make sure their character is moving the way that they want it to.”

To teach kids how to code, Kids in Tech uses Scratch, a program built by the Massachusetts Institute of Technology’s Media Lab. “It’s a really simple tool,” Barrett adds. “Everything is colour coded and there’s not too much typing, which is really awesome because some of the kids we’re teaching are still developing their literacy skills.”

The Toronto residents have digital art backgrounds. Barrett studied at Ryerson University, while Charles focused on video art at Montreal’s Concordia University. They met while volunteering in 2015. At the time, Charles was mentoring the coding club at Nelson Mandela, or as she puts it, “teaching first graders how to build websites.” Together, they began designing a game-design curriculum, which launched in January.

While the focus of their program is on coding, Charles says that STEAM education – an acronym for science, technology, engineering, art and math – helps build other important skills such as project planning and presentation.

“They learn not only how to present their work to the public, but how to present themselves as well. A lot of these kids are extremely gifted and bright. They just haven’t learned how to articulate themselves in the way that they’d like to,” she says. “So it’s confidence-building through giving them skills that are not just technical, but on the emotional side of things too.”

Eventually, Kids in Tech would like to develop curriculums for learning website design, off-screen tech and robotics. They’re adapting their current program to run in about 20 schools by the end of the year, and hope to expand to all 150 TDSB model schools over time. This summer, they hope to reach more students through a summer program.

“What Malene and I are trying to do by partnering with the TDSB is to make tech more accessible to every type of kid, not just kids that are able to afford it or have access to external programs,” Barrett says.

The live stream of Wednesday’s class will show students learning how to draw their game characters digitally. Barrett also hopes it will encourage other educators and tech leaders in Toronto to get involved.

“There’s a lot of organizations around the world and here in Toronto that are doing very similar things, trying to work in classrooms to get STEAM more apparent,” she says. “Our hope is that Kids in Tech blossoms into a community of people that all have this common thought.”

NOW will be broadcasting Kids in Tech’s live stream on Wednesday (February 10) from 9 am to 11 am. 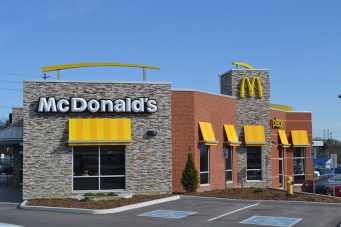 David Suzuki: Corporations have convinced us that our carbon footprint is the problem