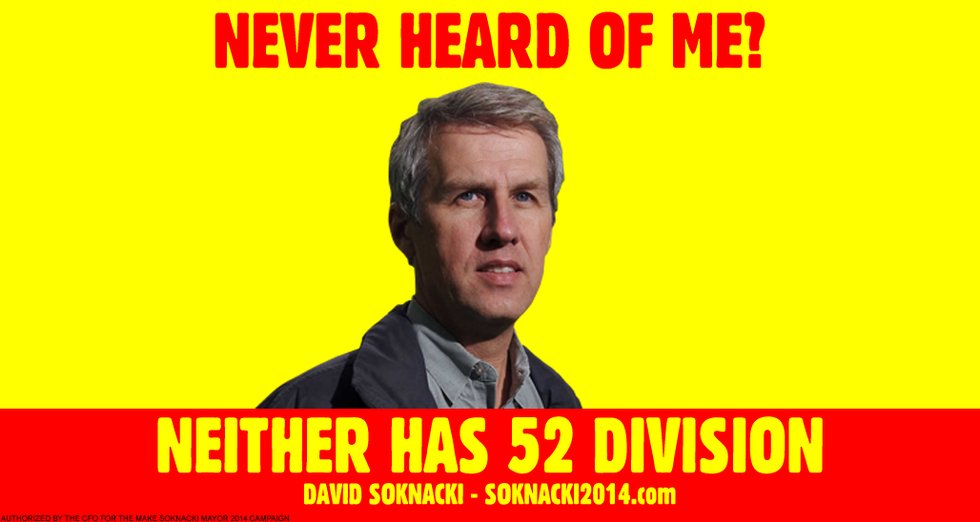 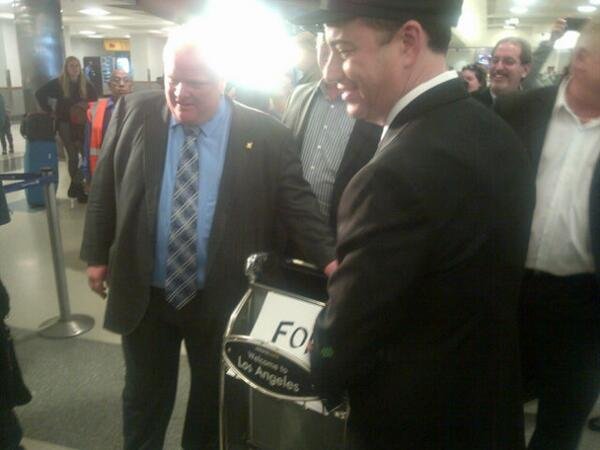 If you haven’t heard of mayoral candidate David Soknacki, don’t worry, “neither has Jimmy Kimmel,” so says one of two memes tweeted out by his campaign Friday.

In a twist of fate, Mayor Rob Ford will be appearing on The Jimmy Kimmel Show Monday, March 3. We’ll be watching closely to see if they pick up on Soknacki’s clever meme.

U.S. border authorities didn’t seem to notice. Ford’s admission that he smoked crack cocaine and the fact he’s been the focus of a wide-ranging police investigation, would ordinarily prevent him from crossing the border. But the mayor apparently had no problem. Brother Doug and the rarely-seen older Ford sibling Randy are reportedly also on Ford’s magical Hollywood tour.

Ford’s notoriety seems the only card he’s got left to play as he seeks re-election, so why not go all in? Earlier this week the mayor appeared on NBC’s Today Show with Matt Lauer. If his record won’t win him votes, maybe celebrity will.

Soknacki himself, meanwhile, had never heard of Kimmel – that is, until his campaign team cooked up the clever meme.

After his Kimmel jab at our now notorious mayor, Soknacki further pitted himself against Ford in another meme: “Never heard of me, neither has 52 Division.”

A few parodies popped up fast and furious online with some pointing out others who haven’t heard of Soknacki. Among them: the mayor’s alleged drug dealer Sandro Lisi and the Dixon City Bloods, the north Etobicoke gang brought in by the dozens on a raft of drug and gun charges last June as part of Project Traveller, the probe that led to the recovery of the video in which Ford is smoking crack cocaine.

“We like [the parodies] and we think they’re funny,” says Supriya Dwivedi, Soknacki’s media spokesperson says.

Dwivedi explains the meme idea came from a running joke. When people ask Soknacki why he is running, his answer is always, because “no one’s ever heard of me.” Twitter hadn’t heard of Soknacki either until he set up an account when he launched his campaign.

Soknacki has tried to set himself apart in the early stages by not being afraid to throw a few punches, recently filing a Freedom of Information request for documents from the mayor’s office in search of evidence that Ford may be illegally using office staff and resources to pay for his re-election bid.

In an editorial to the Huffington Post, Soknacki makes clear many things, including his no-nonsense transparent leadership style, and his disregard for politicking. “If you want to have the same old, there’s a lot of choice.”

How will Soknacki keep his ideas fluid and fresh in an attempt to sway votes away from the other candidates?

He knows the “Never heard of me” campaign is going to wear out.

“In October, [voters are] going to be sick of the circus. They’re going to be looking beyond celebrity and what we’re counting on is that they’re going to say, ‘who will make the city better in terms of quality of life?'” Soknacki says.

When asked what the chances are that he’d appear on Kimmel, he categorically said, “Zero!”

UDATED 03/02/14, 5:30 pm: An earlier version of this story stated that the mayor would be at the Oscars Sunday night. Brother Doug Ford told the Sun this afternoon that the mayor won’t be attending after all citing “heavy security.”