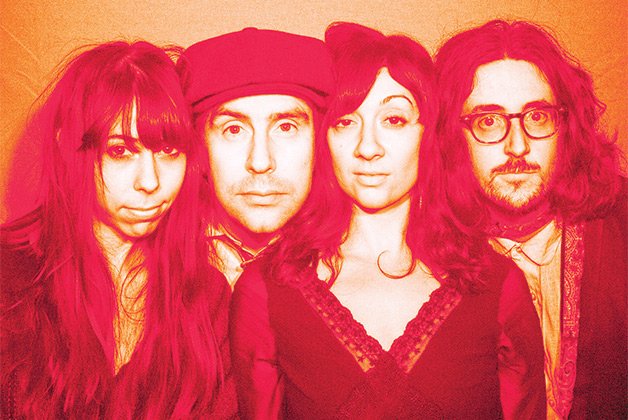 THE KINKS 50TH ANNIVERSARY TRIBUTE SHOW with THE GOLDEN DOGS and members of SLOAN, ZEUS, FRESH SNOW and many others at the Silver Dollar (486 Spadina), Saturday (February 15), 9:30 pm. $10. silverdollarroom.com. And THE GOLDEN DOGS at the Cameron House (408 Queen West), March 7 and 8. $10. thecameron.com. See listing.

A tribute to the Kinks is always a good idea – especially when members of Toronto’s best pop-rock bands are participating. But for Jessica Grassia and Dave Azzolini of the Golden Dogs, the concert’s organizers and de facto house band, the night has even greater import.

The musicians have spent the last two and a half years reconfiguring the Golden Dogs (Grassia now plays drums rather than keys, and Stef McCarrol and Alejandro Cairncross are new members) and making their fourth record in a garage studio it’s currently in the mixing stage.

“[Planning this event] has been a welcome shift of musical gears,” Azzolini explains. “So much love and attention goes into making an album, you tend to lose touch with the outside world. This Kinks night has been the perfect way to push our reset button.”

Initially guests were chosen from the band’s large circle of friends, but as word spread, others asked to take part. The two-hour set currently includes 25 songs and will feature Chris Murphy and Andrew Scott of Sloan, members of Zeus, Fresh Snow, the Bicycles, White Cowbell Oklahoma, Thomas D’Arcy, Meligrove Band and others.

Each guest got to choose a song, and Azzolini says not a single person picked the same one, “a huge testament to the Kinks’ being one of the greatest bands ever.”

What is it about the British Invasion leaders’ music that makes it so enduring?

“Their influence is everywhere, whether people acknowledge it or not,” he says. “Anyone using power chords, for example, is being influenced by the Kinks. Studying the details of the songs as we’ve been doing is like taking a trip inside the head of a genius” – that would be Ray Davies – “and having a nice look around.”

Then there are the recordings, not always technically perfect but full of energy and feeling, an approach the Golden Dogs are embracing on their own forthcoming record. And the songs – the Kinks’ 1970 hit Lola has become one of Azzolini’s favourites after rehearsing it for the past month.

“The lyrics are clever, the arrangement is unique, and it has one of the catchiest choruses of all time. A top 10 worldwide hit about dancing all night with a transvestite. And it came out more than a year ahead of the T-Rex/Bowie glam rock scene.”