NOW MagazineNewsKoch as Koch can

Koch as Koch can

It remains unclear why Global TV managers were alarmed by my story about the billionaire Koch brothers. Is the future of investigative journalism begging for money online? 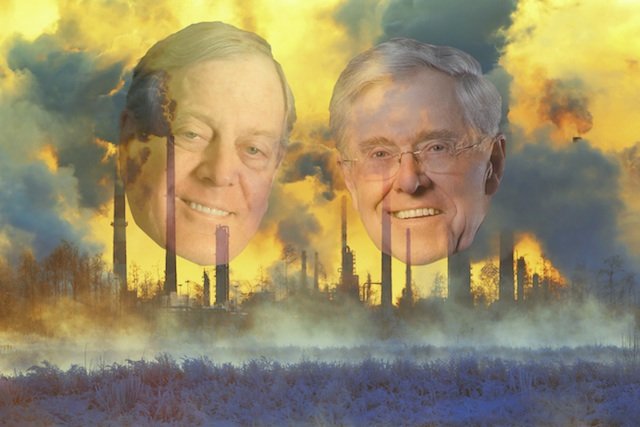 As parts of the Republican Party establishment roil over the realization that Donald Trump might be the party’s nominee for president, one big question that’s arisen is what will Charles and David Koch do about it, if anything?

The billionaire Koch brothers, the ninth richest people in the world, each worth more than (US) $42-billion, are famous for pouring their vast fortune into influencing the American electoral system to further their corporate and conservative goals. They have pledged to spend hundreds of millions of dollars to get a Republican elected to the White House this year.

In fact, twice a year, the brothers host conclaves of hundreds of wealthy conservatives at swanky resorts in southern California. Among the attendees at one of last year’s gatherings were Republican presidential hopefuls Marco Rubio and Ted Cruz.

At one of these events last year, the Kochs and their wealthy friends pledged to spend some $250-million on political activities during the 2016 election cycle. The Koch-guided effort employs a network of some 1,200 full-time staffers in 107 offices nationwide, or more than triple the number employed by the Republican National Committee.

Also on their bankroll are some 17 different groups that, between elections, run attack ads, fund conservative think tanks, university programs, and organizations including the NRA. Some Koch money even comes to Canada, helping to finance the efforts of the Fraser Institute, an influential Vancouver-based conservative think tank.

Among the Kochs’ most famous causes is climate change denial groups and scientists – which they have funded to the tune of almost (US) $80-million since 1997. (Trump has called climate change “bullshit” and a “hoax”).

Jane Mayer, an investigative journalist with the New Yorker and author of Dark Money, a recently-released book about the Kochs, argues the brothers have helped foster the Tea Party movement, while winning tax breaks and regulatory concessions behind the scenes from Congress.

What’s less well understood is the Kochs’ influence in Canada. It was only revealed in recent years that the brothers control from 1.1 million to two million acres of Alberta’s tar sands – one reason they’re eager to see the Keystone XL pipeline built.

Yet news about the brothers and where their money flows is often difficult to find.

Last year, I produced a 22-minute story for Global TV’s newsmagazine program 16×9 called the Koch Connection which explained their ties to Canada and the tar sands.

Two days before the piece was to air – having been lawyered, fact-checked and approved –  senior Global management yanked it from the schedule. A week later, I was let go as a contracted producer, despite having worked on the show for more than two years.

It remains unclear why Global TV’s managers were so alarmed about the story, although one could guess: at the time Global TV was a subsidiary of Shaw Communications Inc., a Calgary-based media conglomerate, which receives advertising dollars from oil companies, including the Canadian Association of Petroleum Producers, of which Koch Industries is a member.

Producing investigative journalism aimed at the rich and powerful has become increasingly difficult, especially for television. With ad revenues falling, networks don’t have the resources, or appetite, to bite the hand that feeds them.

This has occurred as wealth has become increasingly concentrated in fewer hands and the need to scrutinize what the 1 per cent are doing with their money is more necessary than ever.

After my Koch story was killed, I was contacted by Paul Jay, the Canadian television producer and founder of The Real News Network (TRNN), an on-line TV network. Jay established TRNN so he wouldn’t be hampered by the strictures of corporate advertising.

Based in Baltimore, TRNN proudly boasts that it survives with “no advertising, government or corporate funding.” Instead, it relies on fundraising from viewers and sympathetic donors.

Jay told me he wanted to make the Koch documentary for his network. And for the past year we’ve worked on putting together a crowd-funding campaign which got underway last week.

Is this the future of investigative journalism, begging for money online?

It might well be as publicly-owned broadcasters like the CBC and private sector networks like Global and CTV cut their news-gathering budgets and programming – although, admittedly, it’s a far from ideal way to keep the powers that be honest.