Few people know how central this country's oil riches have been to the U.S. Big Oil billionaires' vast fortune. Most of their tar sands holdings remain untouched, but that may soon change.

By Bruce Livesey for NationalObserver.com 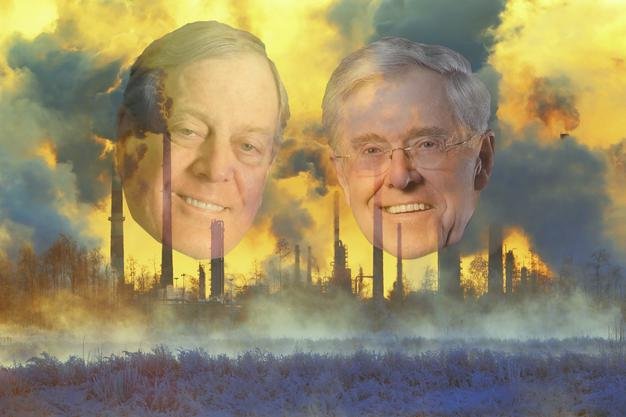 A cluster of small, neat houses, the community is famous for being located at ground zero of the oil sands, whose manifestations are visible from the river’s bank. A Syncrude refinery a few kilometres down the road belches out smoke all day. Tailings ponds of polluted water surround the community.

“Every which way there is an open-pit mine or proposed mine,” says Dan Stuckless, the band’s environment and regulatory manager. “We are at a point where we are 70 per cent leased on the territory here.”

To combat the poverty plaguing the community, the band struck deals with oil companies wanting to build projects on their land. Fort McKay is now a prosperous community with new homes, schools and community centres. Band members also work in the oil patch.

One company currently negotiating with the band is Koch Oil Sands Operating ULC (KOSO), one of seven subsidiaries the famous Kansas-based Koch brothers, Charles and David, operate in Canada.

Run out of offices in a downtown Calgary tower, KOSO has submitted plans to build a $2.4 billion, 60,000-barrel-a-day bitumen extraction project on the band’s land. Called Dunkirk, the Koch project will steam bitumen from underground.

“Their staff have been transparent, really professional, and they really worked with the community,” says Stuckless, who leads the talks with KOSO.

As oil sands projects go, the Dunkirk proposal is of medium size. Its importance lies in that it suggests a dramatic change in Koch Industries’ strategy in Canada.

Historically, Koch made its fortune not through exploring and drilling for oil, but in the transportation and refining part of the business – and then converting it into other products (like jet fuel or asphalt). In contrast, Dunkirk indicates the company is planning to develop its oil sands holdings itself.

In fact, since 2011 KOSO has applied to Alberta’s energy regulator to drill dozens of exploratory wells and build at least one other in situ bitumen recovery project, the Gemini Oil Sands Project. While the Kochs bought up leases to the oil sands, most of this land has remained untouched. This might soon change.

If true, it might explain why the Koch brothers want the Keystone XL pipeline built and why the oil sands are a critical asset for the company’s future.

The Koch brothers, currently among the top 10 richest people in the world, with US$42.3-billion apiece, have attracted attention because of their efforts to influence the political system in the U.S., helping to foster the Tea Party movement and opposing attempts to curb climate change. They are infamous for playing hardball.

Their website, KochFacts, has criticized reporting on their business interests in the New York Times, the New Yorker, Mother Jones, Forbes.com, the Washington Post and Bloomberg’s Markets Magazine.

The Kochs have also levelled broadsides at media stories linking them to Canada and the oil sands, perhaps to direct prying eyes away from their company’s history here. (A Koch Industries spokesperson was contacted multiple times for comment on the issues raised in this article. The company did not respond.)

Few people know how central this country and its oil riches have been to creating their vast fortune.

And what a fortune it is. Today, Koch Industries is a global behemoth with annual sales of US$115 billion, a presence in 60 countries and employing more than 100,000 people worldwide. It has invested US$70 billion in capital expenditures over the past 12 years and produces a wide range of products, not only from the 750,000 barrels of oil it processes every day: fertilizers, drywall, windowpanes, carpets, Brawny paper towels, Dixie cups, chemicals and fibre optics.

As it turns out, Koch Industries also controls anywhere from 1.1 million to as much as 2 million acres of Alberta’s oil sands – the equivalent of about 4,500 square kilometres – thereby guaranteeing the company’s prosperity for decades to come. The value of KI’s oil sands holdings is in the tens of billions of dollars.

“You can say a lot of things about the Koch brothers, you can have a lot of criticisms – but what you cannot say is that they’re stupid business people,” remarks Mike Casey, campaign manager of NextGen Climate Action, a Virginia-based environmental group founded by American hedge fund manager Tom Steyer. “They’re very smart, they play for the long-term…. And that’s why they’re invested in tar sands to such a huge, huge extent.”

Koch Industries was founded by Fred C. Koch, who was born in Texas in 1900. He trained as an engineer at MIT and invented a new thermal cracking process that turned crude into gasoline.

One of Fred’s smartest business decisions was to purchase a one-third stake in Minnesota’s Pine Bend refinery, which was built in 1955 and refined 25,000 barrels of Canadian crude every day. The company began buying and selling mineral leases in the tar sands as far back as the late 1960s, according to journalist David Sassoon, who runs InsideClimate News, a Brooklyn, New York-based, Pulitzer Prize-winning website.

In his 2007 book, The Science Of Success, Charles Koch refers to the Pine Bend purchase as “one of the most significant events in the evolution of our company” and writes that “this acquisition brought new capabilities to Koch Industries and led to many new opportunities.”

In fact, the importance of refining Canadian oil at Pine Bend was revealed in the bitter 1982-83 lawsuit that tore the Koch family apart. Court records suggest Pine Bend was the most valuable single asset the company owned – and its revenues came almost entirely from Canadian oil, which it was designed specifically to refine. Eighty per cent of the crude Pine Bend was refining was coming from Canada by 2010.

Today, Pine Bend refines around 320,000 barrels a day of primarily Canadian oil – and covers 1,000 acres. Canadian sour crude travels through a network of pipelines that begins in Hardisty, Alberta, where the Kochs own an oil terminal with 670,000 barrels of capacity. The Kochs also control an 864-kilometre pipeline system that distributes its Pine Bend products to customers.

The wealth generated by refining Canadian oil not only helped the Koch brothers expand their empire, but also gave them the cash to pursue their ideological ambitions.

Following in the footsteps of their father and his John Birch Society roots, Charles and David began setting up and financing right-wing foundations, front groups and political lobbying organizations – what’s often called the “Kochtopus” by critics.

Today, this network consists of at least 17 different organizations, including the Cato Institute, Americans for Prosperity and the Heritage Foundation.

Some of that cash has come north to Canada – specifically to the Fraser Institute. As first revealed by the Vancouver Observer, tax records show that since 2007 the Fraser Institute, one of Canada’s oldest conservative think tanks, has pocketed a total of US$765,000 from one of Charles Koch’s foundations.

“Multiple generations of Fraser Institute staffers and donors and board members have had links to the federal Conservative party,” says Rick Smith, executive director of the Broadbent Institute, a liberal think tank. “There’s no doubt that you can see the Fraser Institute’s aggressive denial of climate change resonating in Harper government policy.”

And then there’s the Keystone XL pipeline, which would connect the oil sands to the Gulf of Mexico. Koch Industries claims it has no financial stake in it and is not party to the design or construction of Keystone – even producing a YouTube video to this effect. And it’s true the company has booked no capacity on the pipeline, should it ever be built.

These denials ring a little hollow to some: after all, the tar sands are the world’s third-largest source of oil, and the Kochs control most of it.

A longer version of this story was first published at NationalObserver.com.

By Bruce Livesey for NationalObserver.com