While not yet a tsunami, the Korean Wave (known as Hallyu) continued to lap at Torontos shores Saturday as an. 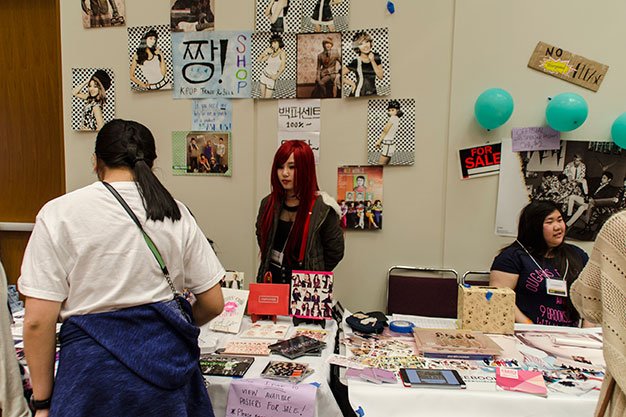 While not yet a tsunami, the Korean Wave (known as Hallyu) continued to lap at Torontos shores Saturday as an estimated 2,000 people attended the first annual Toronto Kpop Con to indulge in their love of Korean pop music.

They are so beautiful! and Oh My God! could be heard repeatedly from the fan-run event at the Metro Toronto Convention Centre as the Kpop enthusiasts mostly female teens with rouge cheeks and dyed hair from all over eastern Canada rifled through posters and bought trinkets with images of their favorite music stars.

Dozens attended the convention, which was organized by Pop! Goes the World!, in cosplay of their most-beloved Korean idols.

I think this event is huge for Kpop in Toronto, said Cindy Zimmer, a panelist for the event as well as the founder of ATK Magazine, a Toronto-based website that reports on Korean culture.

Over the past five years interest in Kpop has been growing in Toronto, Zimmer said, so much so that tickets for Korean hip-hop group Epik Highs June concert at the Danforth Music Hall sold out in under an hour. Toronto was also the only North American city able to sell enough tickets to host the Unite the Mic Kpop showcase, which happened last March.

So, [this convention] shows that the interest in Kpop is really growing, she said.

Complementing the dozen or so vendor stalls at the convention, there were also discussion panels where invited guests offered insight into what makes Kpop Kpop, covering topics such as the Korean indie music scene, critical perspectives of the genre and the business of this particular music industry.

There were also performances by cover artists and well-known Kpop YouTube personalities though from the ear-piercing screams from the crowd you could have easily thought what you were watching was the real deal.

The marquee event of the 12-hour convention was a performance by Korean boy band NUEST.

This is the first time in Canadian history that were having a Kpop group perform at a convention so its huge both for Kpop and for Canadian fandom, said convention host Angel GZ prior to NUESTs concert. Basically, were making history today.

Though many convention goers said that they had wished more would have attended and some even remarked that they were disappointed that too few people cosplayed as their favourite performers, overall the convention was seen as a good first attempt.