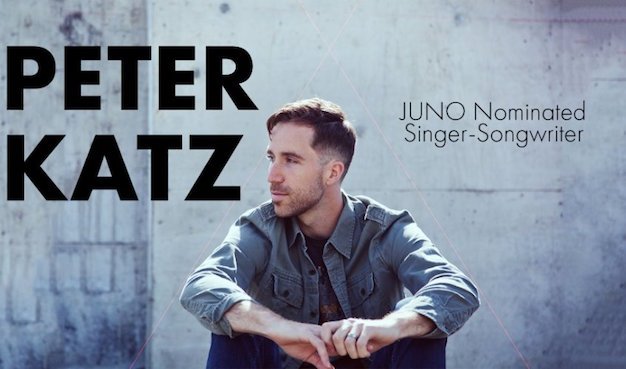 Peter Katz performs at the Living Arts Centre on October 27

As part of this month’s Living Arts Centre Digital Residency, we’re featuring some of the artists audiences can see at this world-class performance venue in Mississauga.

I’m pretty boring on tour and generally go to bed so I can be in shape for the next show. But when I finally finish a long run of dates and am back in the city, one of my fave things to do is to go to Sneaky Dee’s for Mexican breakfast. That always marks an, ‘Ahhhhh – I can relax for a second’ moment in my life.

Where and when was your first performance in front of an audience?

My mom would surely say that I’ve been performing all my life, and I did plays and stuff as a kid and played in a cover band in basement/small shows as a teenager. But performing my own songs as an adult happened at the open mic at the Ram in the Rye Pub at Ryerson. I was SO nervous. My whole body was shaking and I was sweating from all kinds of places I didn’t know I could sweat from. Was a cool moment nevertheless. Felt like the start of something.

In one word, how would you describe your performances?

I was talking to a good friend of mine about this recently. My jam is being at the centre of emotion and I think that’s what I try to create at my shows. There’s a wide range of emotions that hopefully come up for people over the course of the evening (not just sad stuff of course – joy, hope, love, connection, etc) and I love to feel that manifesting in the room. It’s almost a tangible thing. I like to take the temperature of the room, dig in when it’s time to dig in, get quiet when it’s time to get quiet and try to intuit what it’s telling me to offer up to build these moments.

What’s the most important moment in your career that happened off-stage?

Hmmm … maybe meeting and getting to know Glen Hansard early on in my career. I feel like he set the bar for me on how to be an artist, and also how to treat people along the way.

Do you have any pre-performance rituals?

My drummer Ben and I have this ridiculous handshake dance thing that we do. It’s top secret though. I also write out set lists for my band/tech and put a little heart at the top next to their name.

What’s the strangest thing that’s ever happened to you on stage?

I did a show not that long ago where I was SO sick. I was backstage beforehand with every piece of clothing I could get my hands on wrapped around me, trying to stop shivering. It took every ounce of energy I had to get myself up and out on stage and I could barely stand up. Somehow it ended up being one of the most magical performances of my life. I tapped into some kind of energy from a reserve I didn’t know existed, and even though I could barely sing, something just happened and I connected with the audience in a different way. Was really surprising and pretty special.

Michelle Willis. She’s a superstar to the max. The world is starting to notice. She’s touring with David Crosby right now.

What kind of experience are you expecting in Mississauga’s Living Arts Centre?

Despite touring like crazy, I haven’t done a lot of local shows in the past couple of years. There’s a special vibe to a hometown show that I love – so many familiar faces in the audience. Looking forward to showing people what I’ve been up to over the last little while. I’m really proud of this duo show that Ben and I put together and it will be one of the last times we get to do it before I take a step back and focus on the next record.

I’ve got a bunch of touring in Quebec and France coming up around the release of this French album that I just put out, and after that it will be time to be home for a bit and hunker down on my next English album. I’ve got over 50 new songs to sort through. I want to take the time to give them proper exploration and development and discover what my next ‘sound’ is going to be.