Nicholas Hytner on how to shoot the legendary Maggie Smith

THE LADY IN THE VAN directed by Nicholas. 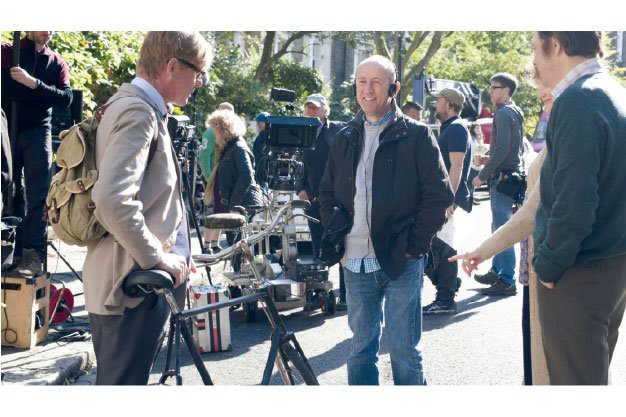 THE LADY IN THE VAN directed by Nicholas Hytner, written by Alan Bennett from his play, with Maggie Smith and Alex Jennings. 104 minutes. A Mongrel release. Opens Friday (February 5). See listing.

Okay, so you’re directing a feature film and realize your lead actor is trying something that’s not quite right. What do you? Well, you speak your mind, obviously.

But what if you’re Nicholas Hytner shooting The Lady In The Van and the actor in question is the legendary Maggie Smith? What do you do then?

“You treat her the same as everyone else,” says a relaxed Hytner, talking about his film at last year’s TIFF. “She needs a pair of eyes on the set to say, ‘I think this route is better than that route.’

“John Gielgud used to complain that when he became Gielgud the grand old actor, he could never get any director, apart from someone of his own generation, to tell him anything. It’s much more frustrating to have a director who creeps away in awe than it is to have someone who says, ‘You did it better last time,’ or ‘We can move on now because we did it very well.’”

Not that he’s unaware of Smith’s intimidating resumé.

“This is an actor who worked with George Cukor and Joe Mankiewicz, played Desdemona to Olivier’s Othello onstage and was directed by Noel Coward himself for the stage version of Hay Fever.”

It does help that Hytner directed Smith in the original stage version of The Lady In The Van, in which she plays a homeless woman who parks her van in writer Alan Bennett’s driveway – for years.

“It was delicious to revisit the material with Maggie – none of us can remember why it took so long to get back to it – and it was great to shoot in the actual house where the events originally took place.”

After helming the National Theatre in London for over 10 years – he left in 2013 – and directing just about every great artist who took to the stage during that period, Hytner’s an expert on the requirements for good acting. Actors, he says, need two things to succeed: technique and instinct.

“The best actors have honed their technique. They’re aware of it, they’re analytical about it, they know how to communicate with the audience.

“The instinctive interpretative talent that is creative artistry defies analysis. One of the things that I love about Maggie is the astonishing interpretive originality.

“The genius takes even her by surprise. She kind of bursts into laughter at something she does spontaneously, as if she wasn’t the one who did it.”

Though he’s directed six films  – The Madness Of King George, also written by Bennett, scored a BAFTA for best picture – you can tell his heart is still in the theatre.

“An actor can’t develop technique without coming back to the stage. There’s no hiding. You have to work out how to communicate what it is you think and what you feel. List the major young British actors and they always come back to the theatre, because they know that’s what makes them technically adept.

“When Benedict Cumberbach became a movie star, I knew it wouldn’t be long before he came back to the stage. Playing Hamlet was something he simply had to do.”

See our review of The Lady In The Van here and our top 5 Maggie Smith movies here.