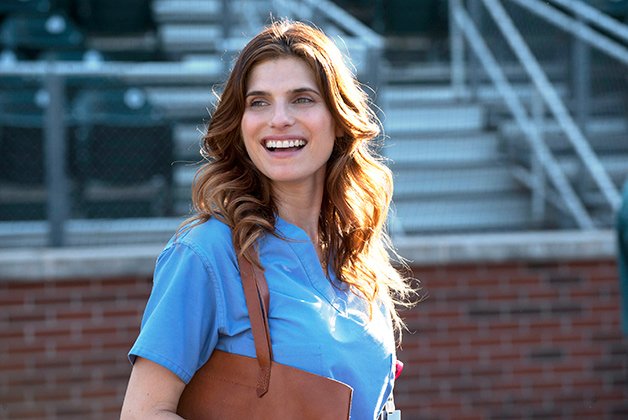 Lake Bell spends much of the first half of Million Dollar Arm in a Skype chat box providing a little grounding for Jon Hamm’s travelling sports agent, JB Bernstein. Bell’s character, Brenda, is Bernstein’s tenant back in Los Angeles, and their bonding over the state of her washing machine gives the movie a surprising amount of heart.

Bell has a surprising amount of heart herself. During a press day earlier this week at the Shangri-La, the actor – who broke big last year when she wrote, directed and starred in the terrific indie romantic comedy In A World… – breaks down Million Dollar Arm from structural and emotional perspectives while marvelling over how Tom McCarthy’s screenplay uses Brenda’s presence.

“He sort of infused that character in a really masterful way,” she says, “where she was integral in JB’s reluctant spiritual journey. [And] her even being relevant in the story is refreshing, because often the female characters in this type of movie can be left to the sidelines – you know, doting upon the male character, or just a pretty thing. I really like Brenda because she’s gutsy she has her own goddamn life goin’ on over there.”

Bell knows a little about that, having suddenly vaulted onto magazine covers and Hollywood’s creative A-list after making her own movie.

“I didn’t understand the full extent of the opportunity In A World… would present, but it’s [been] profound and life-changing,” she says, making a shrugging, overwhelmed sort of gesture. “I just wanted my friends to see it.”

Two more movies appearances are in the pipeline for 2014. Bell stars with Simon Pegg in the blind-date comedy Man Up, and with Owen Wilson in a thriller called The Coup.

“I’m the female lead,” she marvels, “and I just wouldn’t have had that if it wasn’t for In A World…. And that is cool, because that’s my baby. To create an opportunity for yourself like that is incredibly rare in this industry, and I’m so thankful.”

And though it may feel weird to suddenly be approached for leading roles after a decade of comic support, she’s making it work for her.

“I was always more attracted to playing the character role versus the ‘it girl’ in the movie,” she says. “But I guess now when I think about creating my own content, I’d like the protagonist to be that, to be the character. I wanna upgrade the supporting character actor role and make it the lead.”

Lake Bell on working with Jon Hamm, and getting to bring out his comic timing:

Bell on the difference between Million Dollar Arm’s Brenda and In A World …’s Carol, and the extra level of appeal this role had for her: