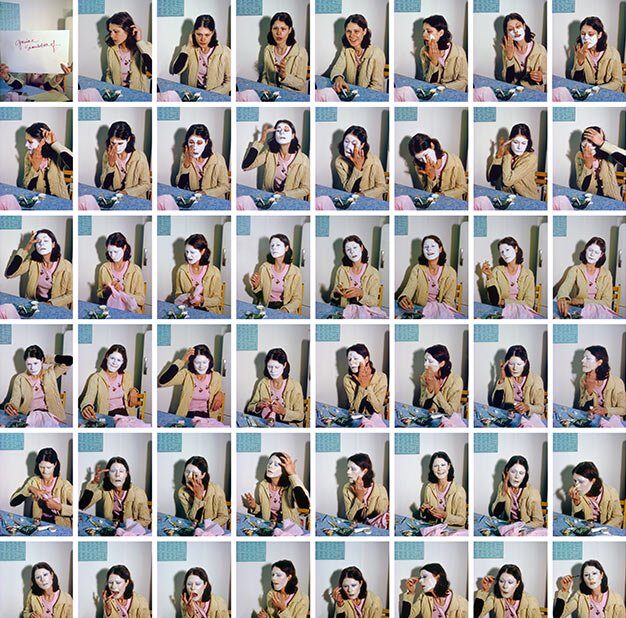 Three light box vitrines open the current Suzy Lake retrospective at the AGO. Called Beauty At A Proper Distance, the installation features extreme close-up photos of her glossy mouth forming a saucy O. It also features moustache and nostril hairs, along with straggly wisps of beard.

Its classic Lake: using the seductive visual vocabulary of advertising to show us what womanhood without the depilating creams, waxes and Photoshopping actually looks like.

Its a feminist bait-and-switch that goes to the heart of her work. For the last 50 years, Lake has been playing provocatively with the cultural tropes and expectations surrounding femininity.

Born in Detroit in 1947 and raised to be a dutiful wife, she opted for art instead, following her painter husband to Montreal in the wake of the Detroit race riots and the Vietnam War.

There, she apprenticed with Guido Molinari, honing her own brand of iconic, process-oriented art practice at Concordia. Using her own face and body as reference points, shes continued to explore nuances of gender, aging and the politics of the body.

This retrospective starts with her early photography work. Grids of self-portraits show her eerily transforming into other men and women or sitting at a table applying whiteface, on which she occasionally attempts to draw. She seems to be asking to what extent feminine identity is a performance, one that starts at the makeup table each morning.

She also revels in her masculine personas. Are You Talking To me? is a room containing 90 photographs of Lake enacting that classic phrase of Robert De Niros anti-hero in Taxi Driver, Travis Bickle. Emulating his sour sneer and schizoid slouch, she generates unease in every shot. Bickle represents the alienated creep lurking at the heart of Everyman, and in impersonating him, she performs a cinematic exorcism.

This show is a generous but incomplete sampling of an intriguing and provocative body of work that anticipated the work of successive generations Cindy Sherman anyone? by decades.