NowMagazineNewsLast shvitz at the Oak Leaf?

Last shvitz at the Oak Leaf?

Entering the Oak Leaf Steam Baths at 216-218 Bathurst is like stepping into an untouched relic of Toronto history. Inside. 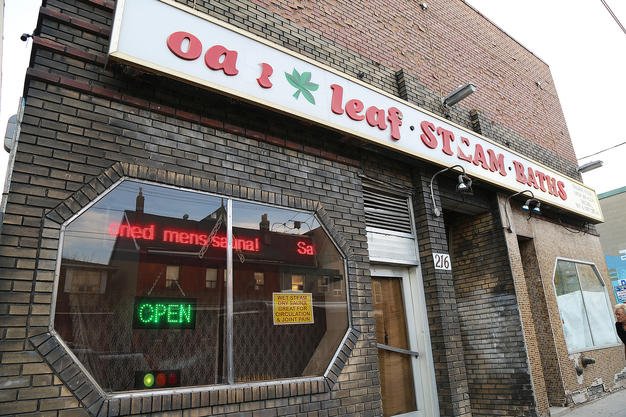 Entering the Oak Leaf Steam Baths at 216-218 Bathurst is like stepping into an untouched relic of Toronto history.

Inside the steam room, you tug on a chain on the wall to let the steam in. It’s like the cord on the old streetcars, the kind you could pull many times to signal your stop just to annoy the driver. But at the Oak Leaf you have to be considerate so you don’t make it too hot for the other bathers.

In the dry sauna, owner Oleg Korneichuk pours water on the rocks and personally offers to flagellate you with his broom of oak leaves made from trees growing out back, and it feels great.

The iconic Oak Leaf is a venerable but mysterious institution to most Torontonians who pass by its art deco facade. Established in 1941, it served mostly eastern European immigrants, Ukrainians who came for the banya and Jews who came for the shvitz.

The Canadian Lesbian and Gay Archives identifies the place as a heritage site. In 2001, gay activist George Hislop, who started going to bathhouses in the 1940s, recalled the Oak Leaf’s postwar role as a slightly out-of-the-way meeting place for men still in the closet.

“You’d have sex there, discreetly,” Hislop told Xtra. “We had a tacit agreement that we didn’t go into the straight areas [of the baths] and they didn’t come into ours.”

Although it wasn’t targeted in the 1981 bathhouse raids, the Oak Leaf was the object of police attention often enough. Headlines in 1950s tabloids Justice Weekly (Two Perverts Imprisoned For Indecency At Baths) and Flash (Unparalleled Orgies Of Perversion Exposed Toronto Steam Bath Uncovered As Den For Unnatural Vice) appeared above stories that called the place “a vice den the likes of which are not to be found this side of the brimstone-engulfed cities of the Biblical plain – Sodom and Gomorrah.” In one case, the Oak Leaf made headlines after a Canadian army private’s alleged part in what Flash described as a “freak sex circus.”

A 2003 Toronto Star review, however, describes the bath as “more Dickens than Aristotle,” because one of its main functions is to provide a place of respite and hygiene for people who are homeless or precariously housed and employed. Eighteen dollars buys a locker rental, two towels and a set of sheets to sleep on vinyl-upholstered cots lined up next to each other inside a locker room.

Along with its current clients, the Oak Leaf has fallen victim to Toronto’s real estate boom. Its future is on the rocks.

Its fate rests with a Brampton court, which placed the business under the receivership of BDO in March. The accounting firm has been managing Oak Leaf’s assets while the court mediates a dispute between Korneichuk, who wants to save the business, and Fred Sobie, son of the deceased former co-owner, who wants to sell the property to developers. Over the phone with NOW, Sobie confirms his intention to sell, but he’s unwilling to say more about the current situation.

“Because it’s in court, I really can’t say anything. It’s between Oleg and I,” says Sobie.

Twenty-three people who rented rooms for $160 a week on the second floor were evicted on May 1 after a court order required the presence of security and cut off Oak Leaf’s hours of operation at 11 pm.

These restrictions were based on an affidavit sworn by an undercover investigator hired by BDO. (The court had ordered BDO to look into and report on allegations made by Sobie.)

The investigator, Joshua Petrie, says he observed on an April 10 visit between 11:30 pm and 1:30 am “a number of rooms with doors open, and people lying in the rooms or engaging in sexual activities.” He says he was “offered sexual favours by various patrons” during a walk around the facility and “Tina, which is crystal meth. I declined all offers.”

But another patron told Petrie he has been going to the Oak Leaf for years and that he comes for the sauna.

Petrie’s affidavit says he left the building at around 1:15 am after “there was an increase in the number of patrons coming in [and] there was sexual activity taking place in the sauna, the showers and the steam room to the point of group sex.”

Petrie’s affidavit says he returned the next afternoon, when he didn’t witness any sex but “heard sounds of sexual behaviour. I was advised by another patron that Friday and Saturday evenings are the busiest times, and that during the week, the Oak Leaf caters to homeless people looking for a place to sleep or clean up.”

While Petrie was there, “an older male of African descent asked me if I had any rolling papers and if I wanted a blow job. I declined,” according to his affidavit, which goes on to observe that “the steam room likely hasn’t gotten a good clean in 20 years.”

Gary Kinsman, co-author of The Canadian War On Queers: National Security As Sexual Regulation, says the investigator’s observations about the prevalence of sexual activity seem out of whack.

“Even in gay-only establishments, people would not be this overt in public parts of the bathhouse. This is not one of those bathhouses. People would be even more discreet. A lot of the men using it for sex would not be out and wouldn’t want to be found out.”

When asked about the investigator’s claims, Korneichuk says, “We only have regulars and the tenants, and they would tell me right away if something happens. They treat this place like their home. They stay overnight and they want rest and peace. There’s no action going on like bathhouses. Here, people respect the place, they meet each other, and whatever their business is is their business. But mostly people come for the steam.”

The Oak Leaf has an outstanding mortgage of $17,000, but it isn’t exactly profitable, according to Korneichuk, who speaks optimistically about the prospect of finding the right business partner to undertake a Drake Hotel-style revival.

But the pride he takes in the place’s preservation makes him reluctant to see it change. “We have the best steam,” he says.