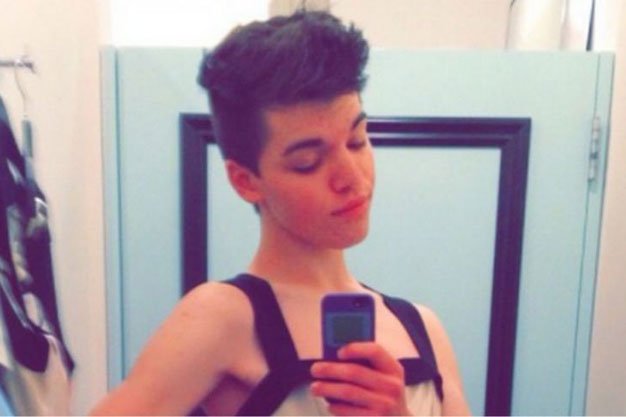 On December 28, 17-year-old trans girl Leelah Acorn left a suicide note posted on her Tumblr blog, and walked to her death in front of a tractor trailer on Ohio Interstate 71.

“Don’t be sad,” her post reads. “The life I would’ve lived isn’t worth living… because I’m transgender.” Her final words were, “Fix society. Please.”

While there’s a lot we don’t know about Leelah’s life, we do know that her parents rejected her, and then they took her to therapists who rejected her – therapists who tried to fix her instead of society. On Monday night, the creator of the television show Transparent, Jill Soloway, dedicated her Golden Globe Award to Leelah. Now the US Transgender Human Rights Institute has launched a petition demanding that the Obama Administration impose a ban on the treatment Leelah received – treatment that aims to correct gender identity or sexual orientation.

For several reasons, Canadians ought to be paying attention to this American tragedy. First, the global centre for correcting gender identity in children and youth is located in Toronto and tends to advise parents to reject a trans identity for their child. Second, some of the strongest research against this approach originates in Ontario. And third, this week, Canadian social workers released a position statement calling all such treatments “unethical.”

The treatment that Leelah received has a controversial history. In the 1960s, researchers at the University of California began to study and treat what they understood as the mental health crisis of feminine boys. The goal was to “help” children by helping them avoid being gay or trans. Therapists often enlisted parents to modify their child, and femininity among those born male was particularly singled out for elimination. Like Leelah’s therapists, some of these early clinicians were inspired by religion. Others simply wanted to “help.”

For decades, efforts to cure homosexuality were heavily criticized and eventually declared unethical by the American Psychiatric Association and the US National Association of Social Workers in 2000. In 2012, the State of California made treatment to prevent homosexuality illegal. Yet treatments aimed at preventing transsexuality never inspired the same level of outrage, and continue to this day. In fact, as recent as 2012, clinicians from Toronto’s Gender Identity Service in the Child, Youth, and Family Program at the Centre for Addiction and Mental Health (CAMH) wrote in the Journal of Homosexuality, “we do not have a particular quarrel with the prevention of transsexualism as a treatment goal for children.”

To summarize over 100 published articles, the CAMH gender identity clinic for children encourages children to conform to expectations for their birth sex. In this treatment model, parents play an active role in modifying the child. In 2006, National Public Radio (NPR) published a story in which this clinic advised a mother to remove her son’s beloved pink toys and prevent him from dressing up in sparkly clothes and playing with girls. The child had been the victim of a violent attack on the playground, yet instead of being shown how to value their child, how to uphold his unique worth and advocate for his rights and safety, they were taught instead to help him better fit a bland and intolerant world. Unsurprisingly, the clinic is no stranger to controversy and a cursory Google search confirms that clinic head, Dr. Kenneth Zucker, remains a lightning rod for critique.

It is important to note that there are a number of differences between the treatment that Leelah Alcorn received versus that offered at CAMH. Leelah’s therapy was religious-based. This is not the case at CAMH. Leelah’s therapists attempted to correct her gender while she was a teenager, whereas at the CAMH clinic, trans teens are regarded as a foregone conclusion and the clinic focuses on young children who are described in publications as more “malleable.”

Despite these differences, there are some very important similarities. Namely, that to be a transgender person is seen as an unfortunate future and parents who reject a trans child are encouraged to go on rejecting them. In 2012, Ken Zucker and colleagues wrote in the Journal of Homosexuality: “If the parents…  would like to reduce their child’s desire to be of the other gender, the therapeutic approach is organized around this goal.”

According to the trans community and its supporters, this is offensive. According to more and more research, it is dangerous.

Some may believe that being trans is so difficult that it leads, in and of itself, to outcomes like suicide. Yet a research team that I am part of (Trans PULSE) found that there is much more to this story. We found that suicidality among trans people varies based on how much transphobia and violence they are exposed to. Suicidality varies based on whether those who want to transition, like Leelah did, are able to do so. Importantly, suicidality varies by how much social and family support one has. For trans youth in particular, when they have strong parental support for their gender identity, their risk of a suicide attempt drops by 93 per cent. In fact, according to our latest findings, parents are unique among all others in a trans person’s life, in that their support (or lack-there-of) has an impact on their child’s risk for suicide for their entire lifetime.

If it’s not already clear, the tragic irony is this: parents who want to protect trans youth from a difficult life by steering them away from being trans, themselves contribute to the unlivable conditions that their child may try to escape through suicide. Leelah knew this intimately. In her suicide note, she described her parents’ rejection of her identity and wrote: “If you are reading this, parents, please don’t tell this to your kids… it will make them hate themselves.”

For this reason, experts like Dr. Edgardo Menvielle in Washington DC, and Dr. Herbert Schreier and Dr. Diane Ehrensaft in California, advise parents that trying to change a trans child is “coercive” – is an approach that “does harm” and is “to be avoided”. In fact, a recent study presented by Dr. Birgit Moller at the World Professional Association for Transgender Health in Bangkok this past year, found that 11 of 13 international experts believe that attempting to correct gender non-conforming children is “unethical.”

Rather than correction, many clinicians are instead using an “affirming” approach in which gender non-conforming young people are offered support to explore and express who they are. For some, this might mean a gender transition. For others, it may not.  But according to Drs. Menvielle, Schreier and Ehrensaft, the task for parents is to learn how to become their child’s advocate – to learn to fix the world around their child, instead of fixing their child.  Given that this is not an easy task, last year, Rainbow Health Ontario worked with a committee of 40 Ontario doctors, therapists and families, to launch a series of brochures that offer parents some assistance.

In a 1985 article, clinic head Dr. Ken Zucker predicted that objection to the CAMH model was unlikely. He stated: “It would seem that preventing transsexualism is a goal that will never gather systematic opposition.” Yet the recent petition to ban these treatments proves otherwise.  As does this week’s statement by Canadian social workers, declaring that: “Any professional’s attempt to alter the gender identity or expression of a young person to align with social norms is considered unethical and an abuse of power and authority.”

Leelah asked for us to fix her world. We couldn’t do it in time. But not only did the adults in her life fail to fix things for her, they tried instead, to fix her. The consequences were devastating. “Don’t be sad,” Leelah tells us in her suicide note. But it’s too late for that. We’re sad Leelah. And many of us are angry too.

Leelah Acorn’s death is a wake-up call to stop fixing trans kids, and start fixing their broken worlds, so they can finally have a shot at a life that is, in Leelah’s words, “worth living.”

Jake Pyne is a researcher in Toronto’s trans community and a Trudeau Scholar and Vanier Scholar in the McMaster School of Social Work.