Toronto foodies will finally get a look at Susur Lee's latest luncheonette when the superstar chef launches his long-in-the-works Lee. 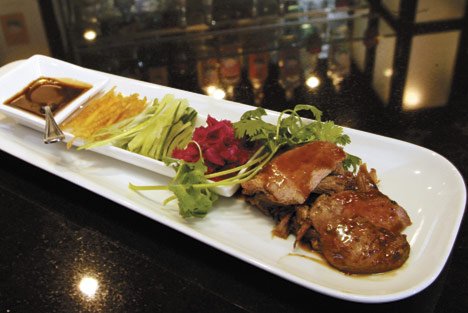 Toronto foodies will finally get a look at Susur Lee’s latest luncheonette when the superstar chef launches his long-in-the-works Lee Lounge (601 King West, at Portland, 416-603-2205, susur.com) early next month.

The iconoclastic cook has not only reconceptualized his signature East-West fusion card and moved it significantly down-market, but he’s reinvented the rooms in which it’s served by knocking through the wall that literally separated his Susur from his Lee. The whole enchilada will now be called Lee, the new baby the much-ballyhooed Lounge.

To help him achieve this culinary vision, Lee’s enlisted his wife, Brenda Bent. A fashion-designer-turned-interior-decorator, Bent first worked with Lee at his eponymous King West eatery 10 years ago. Remember the mood-shifting light organ and the Colonel Sanders dolls?

“Brenda’s known me for 26 years, so she understands what I love,” says Lee, taking a break from a photo shoot for the New York Times. “When she first put those dolls in the restaurant, I thought What the hell?’ But it’s the thing that everybody talked about.”

The buzz led Bent to TV’s Restaurant Makeover (“a privilege, but the whole premise was retarded,” she says), where she improved both Dhaba on King West and Rodney Bowers’s short-lived Citizen on Queen East. The latter is now recast as Lynn Crawford’s Ruby Watchco. In 08, she teamed with now-partner Karen Gable to transform the Susur space into Madeline’s.

“She’s very good with textures and layers,” says Bent. “My taste is a bit simpler.”

The pair next tackled The Counter, the 24-hour resto in the Thompson Hotel on Wellington West, but skipped the usual cliches.

“I hate 50s diners, all that Disneyland and people on roller skates,” explains Bent.

In their place, they went for an Ottoman Empire feel, complete with tufted booths, vaulted ceilings and Byzantine tiles. The Thompson group also owns the Manhattan boutique hotel that houses her husband’s Shang. Any thoughts on that space?

“They have really good taste, but it’s not the way I would have represented Susur,” says Bent.

Like most celebrity chefs, Lee is repositioning his brand. Lee Lounge is the first step.

“It was originally going to be a bar, that King Street thing,” says Bent. “But the concept never sat with me. I just don’t get it!”

“It’s Oriental but tongue-in-cheek – Lee Lounge, the gateway to Chinatown,” says Bent. “I love the House of Chan and Trader Vic’s. It’s such a kitschy aesthetic.”

“Lee Lounge will have a decidedly younger, louder vibe,” says Bent. “I went to Origin when it opened and thought, God, turn down that horrible music!’ But by the end of the night I could have danced on the table.”

“There’ll be a very large tapas menu, not that Susur would use the word,” says Bent.

“The Lounge is for people who don’t want to stand in line and freeze their asses off, who just want to have a drink and maybe something quick to eat,” explains Lee. “There won’t even be knives and forks or napkins. They’re too much of an ordeal!”

What next for the Bent-Lee’s?

“Susur’s been approached to do something at the airport, so we have to get that pitch together, and there’s talk of another hotel in Miami,” says Bent, putting the last touches on the Lounge.

“We know what we do well, and we leave each other alone,” says an unusually philosophical Lee.

“We don’t have a formula,” agrees Bent. “At this point we just want to do what people like. As long as we like it, too, of course.”