Lefkowitz does it right

Cheekily described on its front window. 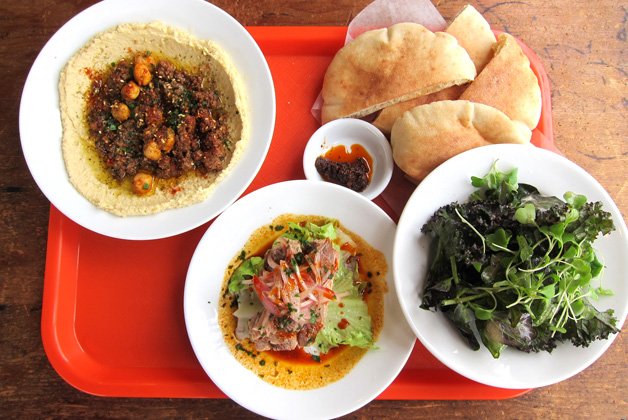 You’ll find the garlicky stuff deliciously spread onto plates and splashed with French organic olive oil infused with house-ground za’atar ($6 small/$7.50 large) or gussied up with spicy minced beef ($7/$8.90), warm mixed olives ($6.50/$8) or chopped up hard-boiled egg ($7/$8, all with pita). There are great slabs of wild Pacific sardines finished with harissa oil and Spanish onion over retro iceberg lettuce ($7), and blocks of mild Macedonian feta aromatically layered with fresh mint ($6).

None the worse for wear, a side of cherry tomatoes in more of that terrific olive oil look like they could’ve been cut in half using that two-plate trick that made the rounds on Facebook a couple of weeks back. But the simple words “green salad” fail to do justice to the magnificence that is local red-leaf kale, baby watercress and arugula micro-sprouts in lemony apple cider vinaigrette (both $5/$7).

Unfortunately the service isn’t as polished as the grub. They take your order at table, then deliver it on a large plastic cafeteria tray, but you have to settle the bill at the counter – no inconvenience in a near-empty resto on a Wednesday afternoon, a bloody pain on the weekend when the lineup out the door rivals Saving Gigi’s down the block.

And while they’re made daily to Braves’s specifications, pitas out of a plastic bag are never as palatable as those straight from the oven.