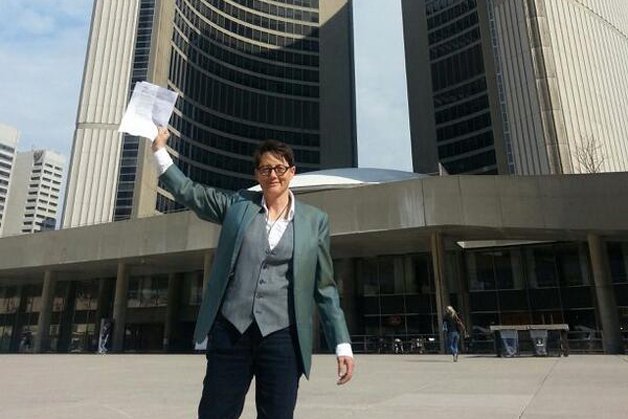 Jane Farrow posted this picture to Twitter on Tuesday

One of the tightest races in this October’s municipal election just got a lot tighter, and that could be bad news for the city’s progressives.

The contest in Ward 30 Toronto-Danforth was already expected to be close. Last time around the incumbent, veteran leftist Paula Fletcher, beat conservative challenger Liz West by only 259 votes. Both Fletcher and West are running again this year setting up what could be another photo finish.

The picture got a lot more complicated Tuesday when celebrated urban advocate Jane Farrow registered as a candidate. Farrow may not exactly be a household name, but she is well known in Toronto political circles and has the resumé of a left-wing superstar.

As the founding director of Jane’s Walk she is an influential figure in the growing urbanism movement. A former CBC radio host, she has co-authored academic studies about walkability and lectured on urban and queer issues at universities and colleges across the city.

She has also advocated for public space and sustainable planning issues with groups like Park People and Active 18, and between 2010 and 2012 worked as an assistant to Mary-Margaret McMahon, council’s resident environmentalist. Farrow currently sits on the advisory board of the World Pride Human Rights Conference.

While her credentials are impeccable, not everyone is thrilled to see her on the ticket in Ward 30. Anthony Schein, an organizer for the Ontario NDP, sent out a tweet Tuesday saying he was “disappointed” she had chosen to run against Fletcher, who he called an “amazing” councillor and a “Ford fighter.”

Schein and others appear concerned not only that Farrow could oust Fletcher, but that the pair could split the left-wing vote and leave the door wide open for West.

In an interview Tuesday, Farrow told NOW that the potential for vote-splitting didn’t factor into her decision to run for the seat in her Toronto-Danforth home ward.

“I really have no desire to represent any other neighbourhood but the one I live in,” she said.

Farrow has never run for office before, but explained that she decided to this year because “people are at their wit’s end with all the partisanship and political gridlock” at City Hall. She suggested Fletcher, a former leader of the Manitoba Communist Party, had contributed to the ideological divide.

“I do business in a very different way. I am not partisan. I am independent. I’m a bridge-builder with a proven track record,” Farrow said.

Fletcher was first elected to council in 2003 and Farrow believes that her narrow margin of victory in 2010 is a sign that voters want change. Farrow says that residents deserve another progressive option on the ballot.

“She doesn’t have a lock on the ward just because she’s a lefty,” Farrow said. “My primary concern is giving people in Ward 30 a progressive choice.”

Fletcher has yet to officially register her candidacy, but says she plans to do so once she’s wrapped up work on several projects in her ward, which she predicts will be six to eight weeks before the October 27 election. In an interview, she sounded unbothered by Farrow’s challenge.

“Last time I looked there was a whole number of people running in Ward 30,” she said.

Fletcher did say however that she had received several emails from residents suggesting it was “odd” that Farrow didn’t decide to run in Trinity-Spadina, the seat that Adam Vaughan vacated last week when he stepped down to run for federal office.

Councillor Fletcher also rejected Farrow’s suggestion that she has been overly partisan, saying that she worked with other councillors this term to stop many of Mayor Rob Ford’s disastrous proposals, including cutting libraries as part of the 2012 budget, building a ferris wheel on the Port Lands and bringing a casino to the waterfront.

“The only reasons those things didn’t go through was because a number of my colleagues have realized that together we can keep the city on a steady, even track. And we have,” she said. “So that is actually, I think, what I’ve done best at City Hall over the last four years.”

Whether or not Farrow or Fletcher are willing to talk about it, vote-splitting remains a reality under the current voting system. The showdown in Toronto-Danforth is precisely the kind of situation that voter reform advocates argue would be avoided if Toronto switched to a ranked ballot system. A provincial bill that would have implemented ranked ballots in time for the 2018 municipal election died when the Ontario election was called earlier this month.

As it stands, West will likely have a shot at a council seat as long as she can distinguish herself from the main left-leaning candidates.

Reached for an interview Tuesday afternoon West, a TV host with CHCH and a former entertainment specialist for CP24, CTV, and Citytv, didn’t provide much detail about how her policies would differ from those of her rivals, except to say she would try to do a better job of listening to residents than the incumbent.

Asked if she thought Farrow’s candidacy could give her a leg up, West said she didn’t know enough about her to say.

“Honestly, I don’t know what she stands for,” she said. “I welcome anybody to the race. You know there are other candidates running as well, so I haven’t given it much thought because my focus is on meeting the people that I want to meet in the community and carrying on with my campaign.”