How Queers Against Israel Apartheid changed the course of Pride 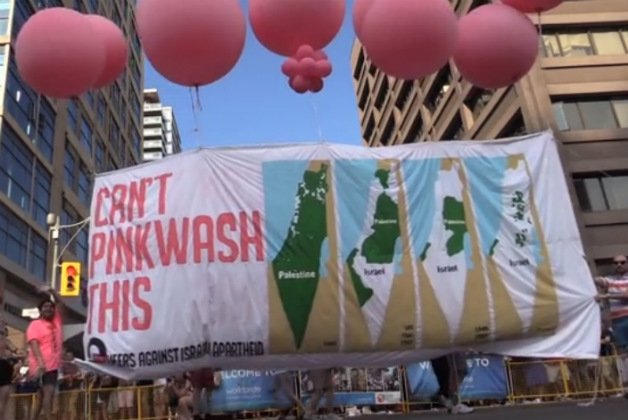 When Queers Against Israeli Apartheid announced last Thursday that it had decided to disband, it signalled the end one of the most divisive and protracted public debates Toronto had seen in years.

Since its inception in 2008, the Palestine solidarity group has sown controversy in the queer and Jewish communities, and its participation in the annual Pride parade prompted some city politicians to repeatedly threaten to pull funding from the event, jeopardizing Toronto’s most important LGBTQ celebration.

The dispute has been so polarizing that it’s no surprise players on opposite sides are both claiming QuAIA’s demise as a victory.

Councillor James Pasternak says he’s relieved to see the end of a group whose sole reason for being was “to demonize and disparage a little country in the Middle East.” He believes QuAIA’s decision to call it quits is evidence that Torontonians have rejected a “tired and broken ideology” that discriminates against Israel and its supporters.

But Tim McCaskell, one the group’s founders, asserts that even though QuAIA is disbanding, “we… achieved what we set out to achieve at the beginning,” which was to raise awareness about pinkwashing – Israel’s supposed attempts to distract from its oppression of Palestinians by promoting its positive record on gay rights.

But according to McCaskell, QuAIA may have another legacy that has nothing to do with injustice in the Middle East. By the time the group was formed in 2008, the Pride festival had come a long way from its origins in the protests against the infamous Bathhouse Raids of 1981. Nearly 30 years later, the festival had gone mainstream and become a major tourist event dominated by corporate sponsorships. To some, it more closely resembled a giant party than an assertion of queer rights.

When Pride’s board voted in 2010 to ban the phrase “Israeli apartheid” it became a flashpoint for participants to take to the streets and advocate for a Pride that was unabashedly political.

“We probably ended up helping Pride get stronger and making [it] a much more community based festival than it was evolving into,” McCaskell contends.

It’s an experience Pride Toronto has taken to heart. In an interview with NOW’s Jonathan Goldsbie in January, the group’s new executive director Mathieu Chantelois said, “For me, without the political aspect, there’s no Pride.”

Below is a not-so-brief history of the Pride/QuAIA controversy.

QuAIA, formed months earlier at Israeli Apartheid Week at U of T, isn’t registered to march in the Pride parade, but its members fly banners at the event.

B’nai Brith claims Pride has been “hijacked by anti-Israel agitators” and demands “disciplinary action” against parade grand marshal El-Farouk Khaki, who spoke at a pre-festival QuAIA event.  Although Pride promises to enhance parade security, executive director Tracey Sandilands says the organization won’t ban anyone from marching. About 200 QuAIA members take part in the parade, without incident.

Pride announces that an “ethics committee” will review all signs used in the parade and ban any that violate the Criminal Code. The Friends of Simon Wiesenthal Centre for Holocaust Studies demands that Pride go further and ban QuAIA, whose activities it says amount to “incitement to hatred of Jews.”

The Pride board votes to ban the phrase “Israeli apartheid.” Says Pride co-chair Genevieve D’Iorio: “This will not be the year we see our festival cancelled because of any one specific message.”

QuAIA pledges to march anyway, and members interrupt a Pride press conference shouting “shame” and “resign” at the board. Sandilands reports that the controversy has cost Pride $200,000 to $300,000 in sponsorships.

Twenty-three past and present Pride honourees, including the 2010 parade grand marshal, return their accolades to protest against Pride’s “censorship” of QuAIA.

Under intense pressure, days before the parade Pride reverses its ban on “Israeli apartheid.” Instead it requires all participants to sign an agreement abide by the city’s anti-discrimination policy. Councillor Giorgio Mammoliti pledges to table a motion at council to defund Pride.

In response to the board’s treatment of QuAIA, hundreds of women and trans people take part in the Take Back the Dyke March, an alternative to the annual Pride-sanctioned lesbian event. They shout slogans like “Corporate Pride has got to go!”

QuAIA members are met with boos and shouts of “Shame on you!” as they march in the parade. They respond with cries of “Hey hey, ho ho, censorship has got to go!”

Council votes 36 to 1 to withhold Pride’s 2011 funding until after the parade to ensure that QuAIA doesn’t march. Mammoliti declares: “If they continue the hatred, that cheque will not be forthcoming.”

Pride announces it’s facing a $250,000 shortfall and is forced to cut its staff in half. Sandilands attributes the financial troubles in part to the QuAIA controversy.

With the LGBTQ community divided over the board’s handling of QuAIA, Pride decides to appoint an advisory board to make recommendations about how to heal the rifts caused by the dispute.

Sandilands resigns one day after revealing the organization is facing a $430,000 deficit.

The Pride board accepts all 133 recommendations made by the advisory committee, which are aimed at making Pride more inclusive and less corporate. They include setting up a dispute resolution panel that will take responsibility for deciding who marches in the parade.

City Manager Joe Pennachetti rules that “Israeli apartheid” doesn’t violate Toronto’s anti-discrimination policy because there is “no legal precedent” that it constitutes hate speech, and it doesn’t impede the provision of city services to any group. Councillor James Pasternak says he will try to revise the policy in order to exclude QuAIA.

Despite the favourable ruling, QuAIA announces it will pull out of the parade in order to deny the new mayor, Rob Ford, a pretext for defunding the event. “Rob Ford wants to use us as an excuse to cut Pride funding, even though he has always opposed funding the parade,” says spokesperson Elle Flanders.

Roughly 50 speakers debate the concept of “Israeli apartheid” at an emotionally-charged meeting of Ford’s executive committee that lasts almost eight hours, but changes nothing. Councillors vote to confirm the city manager’s ruling, and QuAIA still promises not to march.

Mammoliti creeps out lesbian and trans participants in the Dyke March by filming the event with a camcorder. Afterward he claims to have caught some people chanting “Israeli apartheid” and demands the city pull Pride’s funding. He’s mostly ignored.

QuAIA stays true to its word and doesn’t march in the parade. But they don’t stay away entirely – within sight of the parade route, members drop a large banner over Wellesley station that reads “Support Palestinian Queers – Boycott Israeli Tourism.”

QuAIA announces it will march in this year’s parade. “We decided [in 2011] we didn’t want to be the scapegoat for Pride not getting funding from the city. But this year… it’s time to go back,” says spokesperson Tony Souza.

In an attempt to avoid another protracted controversy, council votes to fund Pride in 2012, while also approving a motion condemning the term “Israeli apartheid.” Unlike in 2011, the money is not withheld until after the event. Pasternak declares it an acceptable compromise.

On the eve of the parade, Pride’s dispute resolution panel dismisses a complaint brought by B’nai Brith against QuAIA. Two days later the group is out in full force at the parade.

The controversy is revived when Councillor David Shiner moves a motion at Ford’s executive requesting a report on how to make Pride funding contingent on the exclusion of “Israeli apartheid.” The motion passes easily.

The resulting report again concludes that “Israeli apartheid” doesn’t violate the Human Rights or Criminal Code, and that there is no rationale to deny funding to Pride on the basis of its inclusion. QuAIA is cleared to march.

Both sides appear weary of the controversy. With QuAIA set to march at Pride for the third year in a row, pro-Israel government advocates say they won’t put up a fight. “We’ll try a year of ignoring it and see if it goes away,” says Pasternak. QuAIA’s Tim McCaskell says now the dispute has cooled off his group “can focus on our real message.” The next month, about 50 members march in the parade.

At a debate hosted by the Friends of Simon Wiesenthal Center, mayoral candidate John Tory says Pride should be defunded if QuAIA is allowed to march. McCaskell says he’s “flabbergasted” the controversy has been resurrected, but although Tory is elected on October 27, those who know the new mayor well believe he won’t follow through with the threat.

QuAIA issues a press release announcing it is “retiring.” Among its accomplishments it lists “making the terms ‘Israeli apartheid’ and ‘pinkwashing’ household words in queer communities in Toronto and around the globe.”