His songs didn't overstay their welcome, nor, sadly, did he 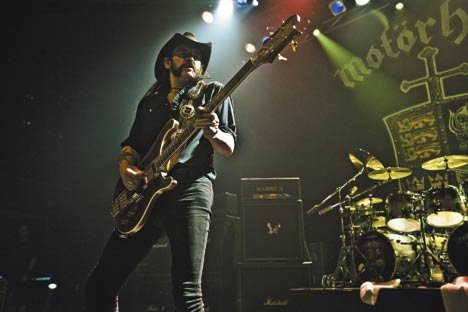 He seemed indestructible, Lemmy did. Steely leader of speedy Motörhead since 1975. Grumbly-voiced rock ’n’ roll renegade unapologetic about his plentiful vices. Talking head in rock docs, and then getting his own – Lemmy – in 2010, where we saw him in his favourite haunts: the Rainbow, his rent-controlled L.A. apartment and, of course, onstage.

Despite health rumours dodging him for the last few years, he kept making music and performing, the only thing he ever lived for in the first place. Toronto got to see him do his thing one last time as recently as September’s Riot Fest at Downsview Park. Lemmy was not at his best, his voice slurred, his movements limited and with other members stepping in to guide the proceedings.

But the fact that he was up there at all spoke volumes, even more so now that we know how close to death he’d been.

That unbending will and determination (stubbornness?) fuelled his music, which never softened, slowed down or stopped over the years. (Motörhead made 23 studio albums.) He went from Jimi Hendrix roadie to member of crucial English space rock band Hawkwind and then to singer/bassist for Motörhead, the punk-influencing power trio conceived in 1975 and best known for speedy classics Ace Of Spades and Killed By Death.

Few musicians become truly iconic, yet Lemmy did straight out of the gates. The mononym. The mutton chops and black hats. The shit-kicking boots and all-black ensemble. The dirtiest mouth you’d ever heard. The iconic pose: microphone high and pointed downward, Lemmy roaring from below.

And though the music was unwaveringly tough, he packed it full of melody and made sure no song ever overstayed its welcome. It was rock ‘n’ roll at its purest: no guitar solos or orchestras, no face paint or Satanism, no odd time signatures or otherworldly lyrics. Just 4/4 songs about girls and war and hard living, peppered with Lemmy’s wry wisdom (also evidenced in so many of his interviews).

Lemmy, 70, died at home, two days after being diagnosed with cancer.

In a 2011 interview with NOW, he spoke about wishing he’d been younger by the time Motörhead overcame their cult status.

“It’s nice to be popular I’m not gonna say it’s not, you know. But now I’m too old to enjoy it. There was a time when I would’ve given them girls a run for their money, but you get to 60 and that slips away a little bit. It’s not slipped away altogether, believe me, but it doesn’t assume the importance it did when you’re 25. You never think anything’s gonna fade away until it’s gone and you think, ‘Shit, what’s happened to that?’”

That’s how many of us are feeling in the wake of his death.

The tributes have been rolling in. Local screenprinting company Paranoid Print has made limited-edition RIP Lemmy tees in his honour, with a portion of proceeds going to CAMH.

@Metallica Lemmy, you are one of the primary reasons this band exists. We’re forever grateful for all of your inspiration. RIP

Biblical’s Nick Sewell: Sail on Lemmy. You needed to die so you could become immortal.

We will say more in the coming days, but for now, please … play Motörhead loud, play Hawkwind loud, play Lemmy’s music LOUD. Have a drink or few. Share stories. Celebrate the LIFE this lovely, wonderful man celebrated so vibrantly himself.