Win a pair of tickets to see Lenni Jabour in concert on May 7th at 3030 Dundas West in the Junction! 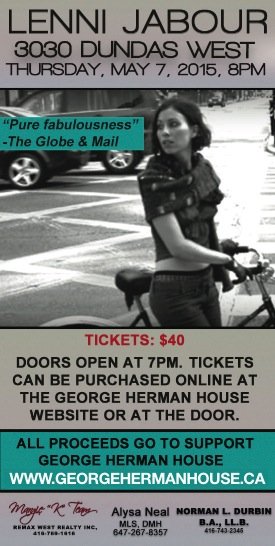 The concert is a fundraiser for George Herman House.  GHH provides transitional housing for women with mental health issues and holistic health programming with a focus on nutrition to help the women move towards independent living and re-integration into the community.  We rely on fundraising to bridge the gap between government funding and the demands of the unique programming.

Lenni Jabour is a Canadian singer-songwriter based in Paris and Toronto, who plays “an eclectic mélange of carnival music, torch, folk and pop.”

Since 1994, Lenni has been singing and performing her original songs in clubs from New York to Los Angeles,  from Toronto to Montreal, and from Berlin to Paris.  She has played in festivals that include the hugely successful Lilith Fair, resulting in a request to pen a song for Emmylou Harris. She has performed and toured as the support act for several high profile Canadian artists, fittingly billed with Rufus Wainwright.  She has been a guest player and singer with artists such as Hawksley Workman, Sarah Slean and Jason Collett.   A noted arranger, she has orchestrated strings for several songwriters, recordings, television productions and soundtracks.

Her debut recording Lenni Jabour, released in 1996, quickly charted on indie Top Ten lists across Canada.  After touring and receiving a considerable amount of encouraging press (Billboard named her one of the ‘top ten Canadian independent artists’) Lenni took off for New York, where she continued to expand her repertoire of self-penned songs and develop her live show.  Upon returning to Canada, her music took a theatrical turn and she created a cabaret-esque concept for a new band, The Third Floor.  Beginning as a small trio of piano, viola and cello, The Third Floor now includes double bass, drums, glockenspiel, accordion, a tap dancer, and an assortment of guest-starring “Third Floor neighbours” including a hula-hoopist.  Building a devoted new audience through her theatrical musical performances in Toronto and years spent living in Los Angeles and Paris, Lenni began composing more saucy songs in French and English to be performed boisterously with various theatrical accents and antics with The Third Floor.  The band’s popularity – garnered astonishingly by word-of-mouth and underground press – has resulted in consistently sold-out concert halls and they are a favorite at venues such as Toronto’s famous Drake Hotel, and Le Theatre des Blancs Manteaux in Paris, where Lenni did a showcase residency spanning several months.  Lenni’s unique songwriting style and performance – which mixes Cabaret with modern mores, themes, and a twist of folk – has drawn widespread media praise, from France INFO to The Globe & Mail.

Fully independent, Lenni’s company Café Fleur Productions functions as a publishing, management and live production company as well as a means to release and distribute her original recordings, a selection of which include: Ten Songs Live (2001), At The Clarion Café (2002), the EP A Small Show of Hands (2003), as well as the full-length studio recording Les Dangereuses, (2006) which gathered praise across the globe.  Recorded in Lenni’s livingroom, Les Dangereuses has been a critical success featured on John Sakamoto’s prestigious “Anti-Hit List” and a darling of the CBC with airplay and on-air live performances by Lenni.   Listeners are figuratively transported from a Parisian cabaret circa 1920 to an empty midnight street in Chinatown circa late last night.  The genre-defying sound of Lenni’s unique songs, interpretation of cabaret, and production leave a candid, street-smart and heartbreaking impression not easily forgotten. Her album “Lenni Jabour: Greatest Hits” is a tongue-in-cheek collection of covers of hit songs from the 70s and 80s.

Lenni currently resides in Toronto with her young family, and is writing music for commercials while recording her forthcoming album of original music.﻿