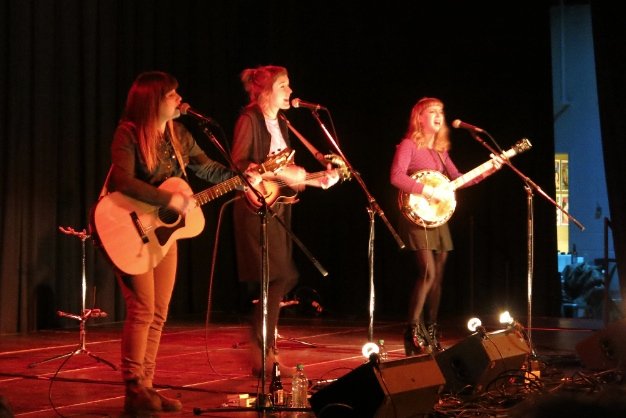 The Moncton trio made up of guitarist Vivianne Roy, Julie Aube on banjo and Katrine Noel on uke regaled an attentive cafe-style crowd with songs, stories and jokes that evoked a summer folk fest set. The preambles often stretched out as long as the songs and the chuckling crowd hardly seemed to mind.

Onstage, the tunes were folkier than on the bands debut LP, Mon Homesick Heart, which came out earlier this year, with some supported only by Roys acoustic guitar and the groups two- and three-part harmonies. At other times, the band made up for lack of percussion with hoedown-like foot stomping while Aubes fingers flew on the banjo. Vocally, the group have an impressive sense of timing.

True Acadians, Les Hay Babies songs and speech are littered with franglais La Bear Song, for example, or Neguac And Back (a song dedicated to Acadian villages that have seen better days). Each member took multiple turns singing lead, on songs about New Years Resolutions (breaking them, I think), urban cowboy types and a truly crappy first car. Noel, the simplest instrumentalist, made up for it by being quite a singer: sometimes it felt a bit like listening to early McGarrigle Sisters.