Lessons for Americans from the city that elected Rob Ford 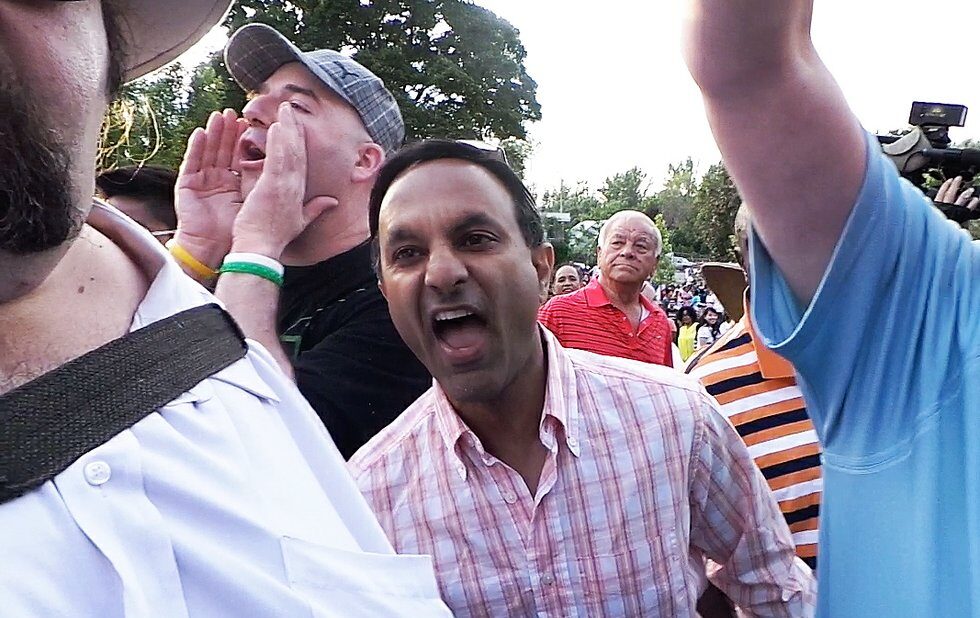 This is Ron Banerjee, anti-Muslim activist and longtime fixture at Ford family events. The above image was captured as he yelled, "Go home, faggots! Go suck a dick, faggots!" to a group of protesters at Ford Fest Scarborough in July 2014. On Thursday afternoon, he was spotted at Yonge-Dundas Square, jumping up and down, and yelling, "Trump! Trump! Trump!"

Hello from Toronto. We promise not to be smarmy or condescending.

It’s just that we have some experience electing a uniquely unqualified bigoted demagogue whose stunted emotional maturity and tenuous grasp of reality caused people to fear for things they held dear. But while we can’t pretend that our late former mayor was ever nearly as terrifying as your president-elect, there are sufficient similarities that it may be worth comparing notes.

There’s a whole subgenre of Toronto punditry devoted to examining Donald Trump in light of Rob Ford, and you can easily Google it, but what echoes right now is the sense of post-election destabilization the shockwave radiating from a political system deliberately smashed to bits by an electorate that seems to prefer the whims of a narcissistic thug.

Please do not mistake the following for wisdom being aware of these perils in advance will not make a sliver of difference. But they may help you be less surprised by some of the phenomena coming your way, so you can put that much more mental and emotional energy toward thwarting the looming ethnic cleanse. (We, uh, didn’t have to deal with that part here.)

So here are 10 things we learned the hard way:

1) It will get weirder and it will get worse. Everything you have seen, heard, and learned up until now really was just the beginning. In addition to all of the foreseeable ways that Trump’s taking office will be destructive, the saga of his presidency will dart down brain-melting paths of which you could not possibly have conceived. Your institutions of democracy will be confronted with, and overwhelmed by, circumstances they were not set up to handle. And you will discover gaps in the law that you never before noticed, because some principles of governance had been deemed too obvious to require spelling out.

2) A marginal victory will be mistaken for a crushing mandate. By merely outperforming expectations, Trump will be treated as though he possesses unrestricted moral authority to reshape systems of government in his image, despite failing to obtain a popular plurality, let alone a majority. And while it remains substantial and not to be underestimated, the extent of his support will still be exaggerated.

3) You will be abandoned by your elite class. Regardless of how little you expected from them in the first place, you will still be disappointed by how much of the business and media establishment even, perhaps especially, those institutions previously skeptical of Trump will come to kowtow to him and his supporters. They will make their best efforts to curry favour by treating him as a conventional office-holder, even when all evidence points to the contrary.

4) Yes, it will be like Harry Potter And The Deathly Hallows. Trump will, for as long as possible, attempt to govern via fear, and that will resonate through every branch of society that even indirectly interacts with government. Many places from which you would hope to hear bold statements of defiance will censor themselves, cowering under instincts of self-preservation.

5) You will run out of pop-cultural metaphors. You will spend years straining yourself to draw new parallels with familiar narratives, until you realize that nothing can be adequate because reality has displaced fiction.

6) You will never so thoroughly hate your country and be more proud of it at the same time. You will encounter ugliness, anger, and self-destructive impulses on such a scale that it will fundamentally reshape your understanding of the nation. But you will also be moved and astounded by people’s capacity to organize and resist. You will learn to articulate values that you’d previously taken for granted of dignity, of compassion, of the greater societal project and why it is they’re worth fighting for.

7) Forces of intolerance will become even less abstract. Every bigot emboldened by Trump’s victory will grow more self-assured as his twisted rhetoric becomes further normalized. At the same time, movements like Pride and Black Lives Matter that had flirted with the mainstream will once again be recognized as radical acts of protest. Visibility and solidarity will resume prominence as the binding fabric of persecuted communities.

8) The political centre will shift. The new administration’s extreme positions regardless of whether they bear any resemblance to actual conservatism will be accepted as the new standard for the right. And people who fancy themselves moderates will weigh those nonsensical propositions with undue seriousness, plopping themselves on the middle ground between policy and insanity, as though that is the most reasonable and open-minded thing to do. This group may include an alarming number of elected Democrats.

9) Things will eventually get calmer, but they will not get much better. Dullness will become a political selling point in and of itself, and following Trump, any middling presidential candidate who can offer anything less than absolute chaos will be welcomed with open arms. After four years of Trump, the standard for competence will be permanently lowered, and the public will be too exhausted to care. He will not be replaced by a figure from the left but by the avatar of a political establishment that has sensed an opening. The 2020 Democratic challenger will not offer an antidote to Trumpism but rather a more artful appeal to many of the same instincts.

10) There will not be a saviour. Trump will not be brought down by any one individual (except possibly himself). His defeat will be slow and incremental, and will not take place in the courts. It will require the collective and concerted work of every segment of society that cannot stand for his shit, spending years on gradually chipping away at his authority.

You have our condolences. We hope we can find a way to be of greater assistance.

Who would you rather have negotiating with Iran–President Obama or Toronto Mayor Ford? My money is on Ford.