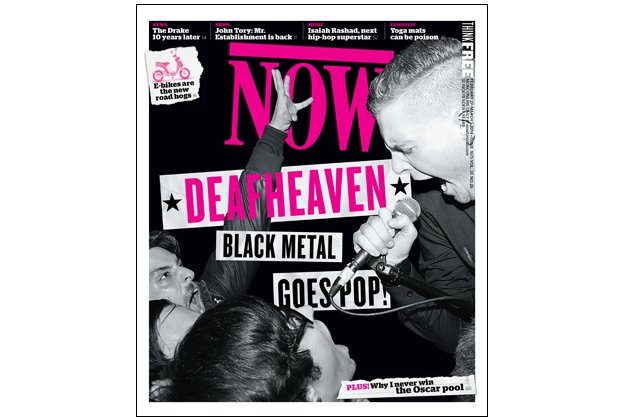 As an avid metalhead, it’s great to see a talented band get some recognition. In regards to their place within the convoluted metal spectrum, black metal’s defining trait is unerring defiance against outmoded institutions. In that respect, Deafheaven’s willingness to push past genre conventions is pretty damn black metal. Troo kvlt, shmoo kvlt.

I love Deafheaven’s Sunbather album. However, the metal community’s negative response is very interesting and shouldn’t be ignored. It speaks to their frustration with the indie community. The metal community generally seek no validation or mainstream acceptance. But when something like Deafheaven pushes through, metalheads scoff.

Because the band has faced genre purist snobbery, a lot of praise for Deafheaven implies that metal fans aren’t as open-minded as indie fans.

When articles can talk about Deafheaven without trying to convince people by saying, “I know it’s a metal album, but it’s actually good!” and using lines like “sleazy ghetto” to describe the rest of the genre, metalheads will stop fighting what seems like elitism with obnoxious snobbery.

Somehow we have a homophobic mayor

Letter-writer Rob Harkness makes a reasonable point (NOW, February 27- March 5). We should not complain about Rob Ford’s continued avoidance of the Pride parade. We really wouldn’t want him in the parade anyway since he is huge embarrassment to the city.

Boycotts for gays in Russia?

Letter-writer Mark Rubin (NOW, February 27-March 5) wants to know why there was no boycott of Russia by gay groups during the Olympics and why gay groups in Toronto are calling for a boycott of Israel.

Many groups around the world have now joined the struggle to support the Palestinian call for justice against Israel’s violations of international law. Some of these supporters are gay groups.

If Rubin is so concerned about the plight of gays in Russia, he should issue his own call for a boycott.

The world was treated during the Olympics to a scintillating display of brazen cowardice by sick fucks masquerading as Cossack militia who apparently don’t think twice about horse-whipping peaceful female demonstrators (NOW, February 27-March 5).

I still can’t bring myself to view the video on the net after having been exposed to it on TV. I’m still in shock!

It simply underscores what’s been rumoured about gay-bashers in Russia all along.

Not all foreigners subject to security rules

The second paragraph states that the “Citizenship and Immigration Canada proposal to have all foreign nationals booking a flight to Canada first obtain an eTA, or Electronic Travel Authorization, is now winding its way through committee in Ottawa as part of a package of amendments to the Immigration And Refugee Protection Act.”

ETA is an important issue for the Canadian Airports Council and its members, and we appreciate the attention given to it in this article. The intent of this email is simply to ensure the nuance is accurately reflected.

Politicians are all the same, buddy-buddy with each other and willing to look the other way when it comes to helping out one of their own. If you still think Michael Bryant is innocent in the death of cyclist Darcy Allan Sheppard, check out bryantwatch.wordpress.com. There’s plenty of good reading there.

The Monuments Men has been universally panned by film reviewers across North America and throughout Europe. Yet Norm Wilner gives it four Ns (NOW, February 6-12).

This is not the first time, but a regular pattern in your publication, to such a degree that I will no longer read film reviews that insult my intelligence. It is up to NOW Magazine to treat and regard its readers with the seriousness they deserve, not with third-rate film reviews.

DeMar DeRozan is no Phil Kessel

DeMar DeRozan is not “scary good” (NOW, February 20-26). He’s in the top 20 in the NBA in only three categories: field goals, free throws and points. But he’s in the top 10 in attempts and in minutes played. He isn’t in the top 20 in any other category except for turnovers. His shooting percentage isn’t terribly good either. Kevin Durant is scary good DeRozan is just good. He’s not even the best player playing for a Toronto team right now. The Maple Leafs’ Phil Kessel is.