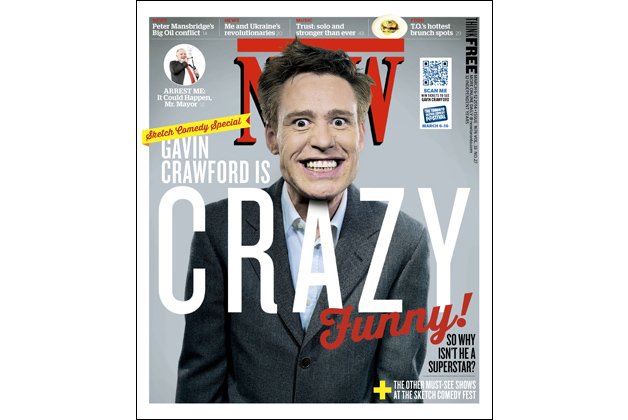 Dumpster diving with a stigma attached

Edith Wilson’s article advocating dumpster diving as a pursuit for the poor (NOW, March 6-12) in fact further stigmatizes the practice.

Dumpster diving advocated more broadly would bring attention to the issue of waste in our society more forcefully. Additionally, even using a “tiny splash” of bleach to clean the food makes it seem as if it is “contaminated.” The whole point is that it’s not.

I think you might be interested as well in my multi-year campaign to get oil industry advertising [barred from] the CBC website and on those pages where news and public affairs programming is posted. I have been writing to CBC for many years about these conflict of interest situations without luck.

I’m not always a fan of all of your articles, but your paper always makes me think, which is great. As an increasingly proud second-generation Canadian Ukrainian, I really appreciated hearing Mark Marczyk’s take on his trip to Kiev (NOW, March 6-12). More people need to understand what’s happening there right now. More folks need to know about the crimes Vladimir Putin is committing. Thanks for sharing the good work. The people of Toronto need to hear more on the subject. PS: Marczyk’s band, Lemon Bucket Orkestra is pretty special, too.

A very interesting take on the new Beck LP (NOW, March 6-12). Usually a little Beck goes an awfully long way. The words are dreadful. The voice is dreadful. But there are moments on Morning Phase that are damn close to transcendent because he buries the weak vocals and the horrible lyrics in beautiful string arrangements.

From the very start the orchestration flattened me. Four songs on MP are kicking my ass. They’re the best things I’ve heard in ages. But no mention of Gene Clark’s massive influence on Beck. It’s kind of like reviewing ELO & not mentioning the Beatles.

The mayor’s (mare’s?) race is getting hot (NOW, February 27-March 5). It will be interesting to see who folds first. Bravo to Ben Spurr for seeing through the transit fantasy pool of rainmakers in John Tory and Karen Stintz. They are just all wet. However, Spurr’s insight on David Sonacki is almost cosmic.

I called Soknacki’s spice and extract company in Scarborough on a business matter. His staff’s zeal and dedication to product excellence is emblematic of the owner’s. Soknacki puts his staff and his company’s customers first. In 2014 Soknacki will put Toronto first in fiscal openness and realistic expectations

What police can and can’t prove with Ford

Re “If he’s going to arrest me, arrest me” (NOW, March 6-12). The Toronto police have charged the mayor’s alleged drug dealer, Sandro Lisi, with extortion over attempts to retrieve the crack video. If they were going to charge Ford with anything, I figured it was also going to be in connection with Lisi in the extortion case. Now police are going after more phone records. If police can prove Ford was giving Lisi orders, they have him.

So our pseudo-mayor has finally found the gravy train. Call it the “blue line,” aka police headquarters at 40 College, where the annual budget is $1 billion-plus.

Biking a two-way street on one-ways, too

Letter-writer Scotty Robinson honestly thinks he should be riding his bike on a snowy narrow one-way street (NOW, February 20-26)? Dumb-ass! He’s just asking to get hurt. He’s lucky he didn’t get killed by that SUV! No sympathy. Drivers are being asked to share their road with cyclists, yet most cyclists ride the streets like they were made for bikes. Do you see motorcycles on the streets in the winter? No. Do you know why? Because it’s dangerous!

Most cyclists in the city move at a sedate-to-moderate pace. Cyclists who top out at 120 kilograms, the average weight of an e-scooter, are relatively rare, and they tend to ride at least as slowly as the general population of cyclists.

People using e-bikes tend to come in all shapes and sizes and levels of fitness, too, but they can travel at much faster speeds than most cyclists with no additional effort required. When these fast, quiet, massive machines are used carelessly in bike lanes, they can do a lot of damage to cyclists – a lot more than the typical cyclist can cause to another typical cyclist.

I’m not saying that every e-bike user is reckless. I’m sure there are many aware and courteous ones out there. But fast, heavy, quiet machines piloted by careless, reckless or just plain ignorant people are a genuine risk to others in the bike lane.