Badass breaks beauty clichés I loved your choice of. 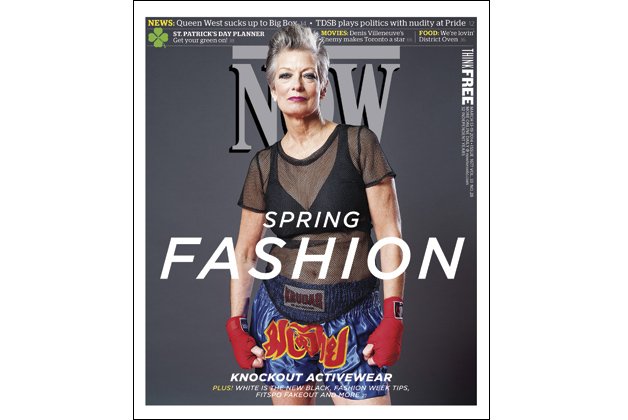 I loved your choice of model for the Spring Fashion Issue (NOW, March 13-19). I could drone on about how I wish it weren’t so rare or noteworthy for a publication to present images of a model that break free of stereotypical standards of beauty.

But all I really want to say is that Helen M looked fierce, edgy, sexy and totally badass.

Get a grip on pricey fashion choices

I was delighted to see a model clearly 50-plus, attractive and fit gracing your cover. Imagine my surprise when the clothes she was wearing ranged in price from $375 for a mesh top to pleated leather shorts at $1,095, mostly chosen from Holt Renfrew.

Have you forgotten who your readers are and what they can afford? Who gave the go-ahead for such a ridiculous range of choices?

Get a grip and get real with your price points. The “silver-age” model does not compensate for the serious gaffe in budget.

Indies on Queen West not the answer either

Sabrina Maddeaux laments the loss of indie boutiques on Queen West (NOW, March 13-19), but I lament their arrival.

Queen West was once the place for $10 (used) dresses and funky jewellery and comic books and sci-fi, only they were pushed out by overpriced designers with their $100-plus dresses.

Re Trustee Lays Bare On Pride (NOW, March 13-19) Body honesty results in enormously better outcomes than body shame. Prudery and good intentions are not an excuse for stopping public nudity at Pride. Trustee Sam Sotiropoulos is part of a very serious problem.

Re Brazen Move A Game Changer For Ford (NOW, March 13-19). Rob Ford just doesn’t get it. His alleged criminal activity is no different from anybody else’s.

There are dozens of people in prison in the province of Ontario convicted of exactly the crime to which the mayor so enthusiastically confesses – buying and smoking crack. If the mayor is allowed to pass this off as just a moment of poor judgment, then we owe the same consideration to every last poor, misunderstood crackhead in penitentiaries.

Yes, Enbridge and all oil and gas companies do get their way on everything, whether it’s a pipeline or rail transport (NOW, March 13-19).

Numerous spills in both Canada and the U.S. have resulted from transporting oil and now dilbit, which is most disastrous to our environment and consequently to residents and wildlife. We also know of the dismantling of Environmental Assessment Act by the federal government, and the rhetoric justifying lax rules.

So why force the provincial government to rethink its position over a done deal?

Will we ever learn to be proactive?

I’d like to express my gratitude to NOW and particularly Mark Marczyk for his article Maidan Voyage (NOW, March 6-12).

It is the most unbiased and truthful account of events in Kiev I have read to date.

I’m hoping for a follow-up, as I believe that people should know what is happening in Ukraine and why. It plays an important part in the way the world is changing.

Are E-bikes Getting A Free Ride? (NOW, February 27-March 5). An exercise walker also provides some protection for pedestrians from bikes, e-bike riders and ill-mannered pedestrians. Note that anyone can modify a regular handicapped walker, too.

Such an exercise/walking aid also provides a great shield from aggressive parents with their single- or double-width baby carriages, which many seem to use as weapons.