Sadly saddling up to Rob Ford This is. 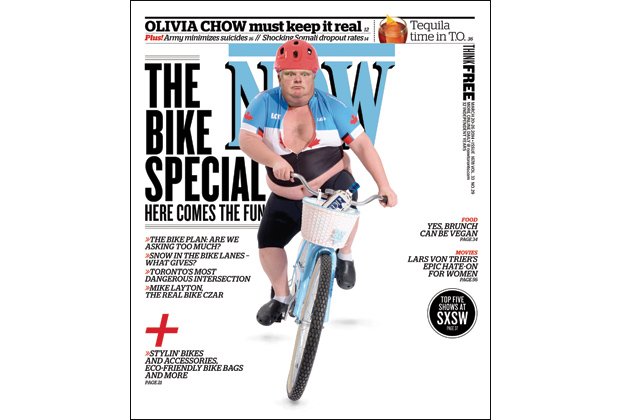 Sadly saddling up to Rob Ford

This is how you support the bike riders of the city, with a shot of our mayor teetering off a bike? (NOW, March 20-26)? Is this supposed to be funny? Or is it just a cheap ploy to make people pick up your paper?

Well, whatever it is that’s made you portray the city’s cycling community as dorky Rob Fords who can’t see straight, it’s definitely not cool.

In fact, “Fuck NOW” isn’t even a strong enough sentiment for how I feel about your stupid asses right now.

Fun with Ford no more

Everyone wants an end to this Rob Ford shit, fun as it is. So if you’re serious about it, how about not putting him on the cover any more?

Not everyone found our cover lame

Re Slippery Send-Up For PETA (NOW, March 20-26). I chose to stand in front of the Eaton Centre in the freezing cold wearing nothing but body paint, nipple pasties, a thong and stilettos because I wanted to call attention to cruelty to animals who are killed for their skins. Lizards, for example, are usually clubbed on their heads or have their spines severed with chisels when they reach “marketable” size.

I bared my skin in order to provoke discussion about cruelty to animals and prompt people to shed their skins. Like Lady Godiva, who rode naked on a horse to protest taxes on the poor in the 11th century, I know that eye-catching, seemingly outrageous actions are sometimes necessary to make people debate depressing things they would otherwise prefer not to think about.

When the media reports on PETA’s activities, people flock to order our free shopping guide to compassionate clothing and other information. I encourage anyone who wants to learn more about PETA’s campaigns or see our ads featuring men to visit PETA.org.

People for the Ethical Treatment of Animals

Pride versus PETA: the naked truth

Letter-writer Malcolm Boura makes an excellent point (NOW March 20-26) that nudity is not out of place in a Pride parade. It is psychologically unhealthy to be ashamed of our bodies.

On the next page, however, Sabrina Maddeaux expresses her disgust at the women from PETA dressed in body paint protesting the use of animal skin in fashion.

It’s no more shameful to expose one’s body in the name of animal rights than to do so in the name of gay pride. I do agree with Maddeaux, though, that the protest would have been better had men also participated. What’s the matter, guys, don’t you support animal rights?

I was amused to see two different letters in your March 20 issue on local fashion coverage (NOW, March 20-26).

The first disliked the fact that the garments in your fashion spread were too mainstream and expensive (they were), while the second pointed out that even local “indie” boutiques are not affordable (also true) and longed for the days of true indie art and fashion on Queen West.

We packed the Gladstone with more than 50 local artisans who make clothing, jewellery and accessories, most of them working on too small a scale to take part in Fashion Week or even Fashion Arts Week (FAT) or run a bricks-and-mortar boutique full-time but all of whom are creating truly fantastic, affordable, wearable pieces of art.

I find it baffling that your music editor would declare Yonge-Dundas Square an excellent choice for St. Vincent’s upcoming gig (NOW, March 20-26).

I would expect that from someone unfamiliar with the city’s wealth of venues.

If it was the only venue in town, YDS would still be horrible. The sightlines are brutal, as is the sound, and it’s too open to people stumbling into the place who could care less.

This would be like your food critic, Steven Davey, saying McDonald’s is an excellent choice for fine dining.

The real deal on extra-virgin

I am writing regarding Cold-Pressed: The Olive Oil Guide (NOW, March 13-19).

While the article contains some good suggestions for consumers regarding reading and interpreting olive oil labels, there are a number of misleading statements.

At the North American Olive Oil Association, we closely monitor olive oil import data and find the article’s lead statement, “Last winter 80 per cent of Italian olive sold in the U.S. was detained at U.S. Customs because of residues of an outlawed pesticide,” is used to raise alarm.

The NAOOA is also familiar with the Canadian Food Inspection Agency’s olive oil monitoring program, a targeted program rather than a general monitoring of all olive oils for sale in Canada.

Since the program’s focus is on testing limited samples from suspicious oils, to suggest that 27 per cent of all extra-virgin olive oil is adulterated is highly misleading. In reality, the incidence of adulteration has declined since this helpful program was initiated, and legal actions have been taken against companies.

Finally, the California studies referenced have been discredited yet continue to receive extensive media promotion. The widely publicized statistics claiming that “about two-thirds do not meet standards” refer only to taste panel results.