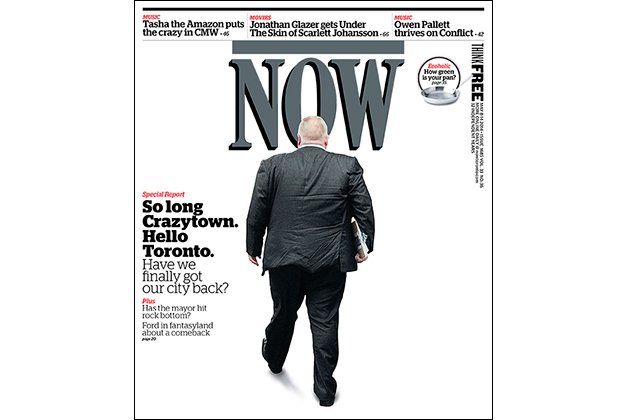 Enzo DiMatteo asks, “What is it in our system that’s so broken that people in Toronto voted for [Rob] Ford, and may still do so in significant numbers?” (NOW, May 8-14).

There is presently no indication that either Olivia Chow or John Tory is capable of understanding that, or turning it around.

This is our Crazy Town

How do we “get our city back” (NOW, May 8-14)? Rob Ford didn’t elect Rob Ford to office, Toronto did. The same city that elected Mel Lastman. And the same city that gives Chicago a run for its money in the corruption sweepstakes while putting up dozens of badly constructed condominiums in the core.

That’s your Crazy Town. Ford didn’t invent it. A city with more credibility would have known what to do with Ford and his issues a lot sooner.

Rob Ford and the othering of Toronto

As part of the wave of optimistic Millerites, I was a newcomer to the city and full of hope for my adopted home. But seeing the emergence of Ford Nation has been as baffling as it has been humbling.

In a way, we really were downtown-centric white liberals. (Whether you could call us elites is certainly up for debate.) Jonathan Goldsbie is right – it will now be impossible to ignore the parts of Toronto we can’t imagine being part of the Toronto we usually see as urbanist, progressive, left-wing and hopelessly rational. No, the “other” is definitely there.

We wouldn’t be spilling so much ink on Ford if people did not worry that he could be re-elected despite everything. Unfortunately, in a democracy, there is nothing to stop us from electing idiots.

NOW readers should be aware that letter-writer Ian Tuck equates civilization with socialism in his idea of the “common good” (NOW, May 8-14). This is a slippery rhetorical trick.

It might make Tuck feel good to think that taxation is innately egalitarian, but let’s remember that taxation is non-consensual, and tax money buttresses many things that people don’t endorse.

Civilization, to me, is the freedom to choose where one’s money goes.

Admittedly, I’ve yet to see Under The Skin, but reviewer Glenn Sumi’s genre snobbery seems to be showing (NOW, May 8-14)

Praising the film as “[Anything but] some sci-fi thriller” (read horror), he bestows five Ns because “it deals with big themes.”

Sorry, but horror films throughout the decades have dealt with alienation (Repulsion), charity (Let The Right One In) and the human condition (Invasion Of The Body Snatchers).

Much like self-important “auteurs” who can’t bring themselves to admit that “magic realism” is nothing more than a pretentious name for fantasy, Sumi would do well to remember that the drama, comedy, and documentary genres have churned out just as much crap as their B-movie counterparts – usually in a far more pretentious fashion.

Matthew Behrens [in the sidebar to Ellie Kirzner’s obituary], reminds us that] Heap protested the Harris/Flaherty “killer cuts” by pouring blood on the steps of the provincial legislature. Heap’s spirit will live on and inspire us to carry on his social justice.

What better opportunity than assuring that the upcoming provincial election defeats Tim Hudak, a Harris/Flaherty protege?

The word on spoken word

I’m unsure exactly who in your organization is responsible for the nomination process for your Best Of Toronto Reader’s Poll. The spoken word nominees are mostly carry-overs from last year.

There are also amazing spoken word artists out of the Jane and Finch community, as well as collectives of young poets like R.I.S.E. Poetry Movement in Scarborough and Spoke N’ Heard in old Toronto. I would be happy to help you come up with a more representative list of nominees so that people who attend spoken word events feel like you know what you’re talking about when you ask for readers’ votes.