Letters to the Editor: November 20

The new wave of fems is here –. 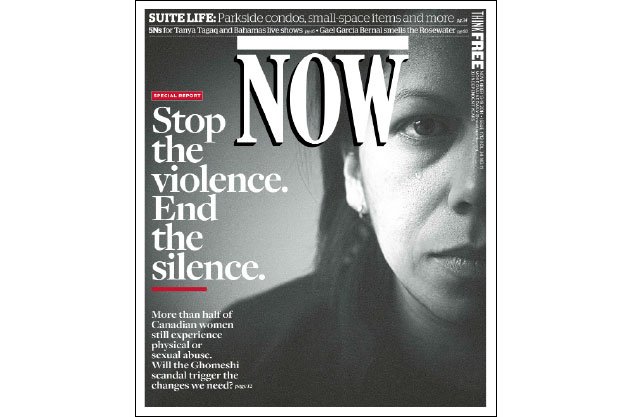 The new wave of fems is here – watch out

Thank you for Susan G Cole’s It’s Way Bigger Than Ghomeshi (NOW, November 13-19). It’s the high heels, a kind of modern foot-binding. Young women suffer for the look, not understanding it sends a message of compliance.

No opinions required, requested, needed, thanks. Hide your power, if you have any.

A page before your special section to address the very serious issue of violence against women (NOW, November 13-19), you have an ad for the Kubrick exhibit at TIFF with an all-too glamourizing image of a super-triggering character from A Clockwork Orange who plays out sadistic violence against women. Why not a different image at least?!

How a woman expects to be treated

Thank you for Jacob Scheier’s Manifesto For The Responsible Male (NOW, November 13-19). I actually have not been following the Ghomeshi story, but your manifesto summarizes well how a woman should expect to be treated by a respectable male.

I’m a 33-year-old professional female with experience in consulting engineering, which is a male-dominated profession.

After 10 years in a corporate environment, I’ve noticed how difficult it is for women to succeed. This is not the fault of men, but it is a fault that they lack awareness of and sensitivity to the needs and strengths of women. Hence, insensitive comments are made success standards are based on typically male precedents. It’s sad and true.

“I loathe being thought of as a victim.”

Thanks to Michael Hollett for sharing his story (NOW, November 13-19). I, too, grew up in a household where verbal and physical abuse were the norm.

I have been abused, but I really effing hate saying it. I loathe being thought of as a victim. But I guess technically I was.

I got out. Only a few years of it. Police. The whole nine. Finally said enough. I cried and felt ashamed that I’d put my son through that even once.

I’m terrified it will affect him for life, change his opinion or his treatment of women. Scar him. I may just print your article and leave it out as an example for him on how not to be ashamed, how to overcome.

This is a response to Sabrina Maddeaux’s Shame Game, relating to fashion shaming on Jimmy Kimmel’s Lie Witness News (NOW, November 13-19). I am in disbelief that Maddeaux could actually say the people in these videos are victims. Let’s take gender, race, sexual preference, etc out of it and look at it for what it is: pathetic people wanting to be noticed and garner their 15 seconds of fame. The trap is set, and idiots walk eagerly into it. As for your question, “If someone stuck a camera in my face, would I not attempt a good-natured stab to answer”? Yes, I would, but not lie through my teeth to be an attention-seeking moron. Stop protecting idiots like this.

Building a better Best of Toronto

No, wait, there it is, under Shopping: best design firm (architecture, interior or product). This makes no sense, considering that NOW regularly has feature articles on issues that affect our public space. It’s time for your publication to recognize the social and cultural contribution of architects in our city. Stop paying lip service to developers and suggesting that architecture’s sole worth is as a consumer good.

I have Parkinson’s. Standing for a long period of time is not possible. So when I read that the November 11 Peter Hook & the Light show at the Music Hall was general admission, no seats on the floor, I contacted the venue. I received an email back within five minutes. “No problem,” it read. A chair would be set up for me near the stage, close to the action, as I wanted. The good folks at Danforth Music Hall should be recognized for this kind gesture.