Letters to the Editor: December 4 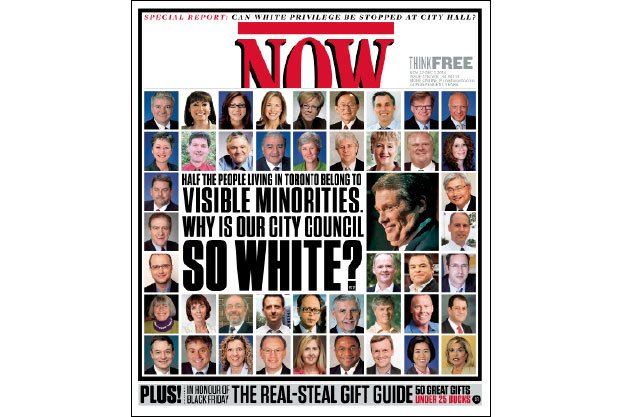 Hats – and keffiyehs – off to Jonathan Goldsbie for his epic concern-trolling in Can White Privilege Be Stopped At City Hall? (NOW, November 27-December 3). Starting with his reluctance to use the standard Canadian English phrase “visible minorities,” Goldsbie digresses into lambasting Sue-Ann Levy for her insistence on referring to Ausma Malik as a Muslim. Well, she is Muslim, and anyway, how exactly is that different from referring to a downtown councillor as “out lesbian Kristyn Wong-Tam”?

Jewish lesbian journalist Levy has ample reason to be suspicious of any and all Muslim politicians given what other Muslims do to gays, Jews and journalists. (For that last group, beheading is now quite popular.)

I’d certainly be the first to read any article by Goldsbie exploring Denzil Minnan-Wong’s Roman Catholicism, but I don’t expect intellectual honesty from his political class.

Ethnics’ own fault council is so white

“Why is our city council so white?” Because apparently minorities couldn’t be bothered to vote for minority candidates.

If Barack Obama can twice be elected U.S. president in the face of all sorts of racist rhetoric in a country that is 65 per cent white, then the 50 per cent of Torontonians who are minorities could certainly organize and elect their own to public office if they were so inclined. The fact that they can’t would seem to suggest that most of them care less about the ethnic/racial makeup of city hall than NOW does.

And if they do care but refuse to make their numbers count, then whose fault is that? Frankly, it’s a good thing that Torontonians have chosen not to emulate the places in our world where people vote along sectarian lines. That’s progress, surely!

What MLK would say

You pose the question: “Half the people living in Toronto belong to visible minorities. Why is our city council so white?” I guess Martin Luther King Jr. had it completely backwards when he said, “I look to a day when people will not be judged by the colour of their skin, but by the content of their character.”

Reading this week’s NOW, I got to page 32-33 and was horrified to find photos of dead pigs (NOW, November 27-December 3). As a vegetarian, I found this very distressing.

I know people eat animals, but I don’t see why I have to look at this kind of thing in order to read restaurant reviews. I find it hard to imagine even meat eaters wanting see these grisly photos.

This was in incredibly bad taste. I’ve been a regular reader of NOW for 20 years, but this is the last one I’ll read. Congratulations.

Great article on Romeo Phillion’s fight for justice (NOW, November 20-26). I am so pleased that you centred on Romeo’s utterly inhumane situation. He will be very grateful for your efforts to bring attention to his compensation issue.

Association in Defence of the Wrongly Convicted,

Why I can’t get angry at the TTC any more

As I sit in the subway train listening to a barely understandable message on the PA system apologizing for longer than usual travel times, I realized that I do not get angry at the TTC any more (NOW, November 20-26). I’m conditioned to accept bus shuttles instead of subways, being late for events and spending time in dark underground trains. I have a request of our new mayor. Please do not build any more subways until Andy Byford and his people find all of the elusive and mysterious ancient “signals” along the tracks and get them to do whatever they are supposed to do. When we were still married, I told my ex that I was late because of TTC signals, but she didn’t believe me. This letter was written on a slower than usual train. I guess the party will start without me.

For Christ sake, leave Jesus out of it!

Re It’s Way Bigger Than Ghomeshi, by Susan G. Cole (NOW, November 13-19). I don’t think the profanity “for Christ’s sake” has a place in a serious piece of journalism. It packs a punch of verbal violence and disrespect and is not helpful to the ongoing dialogue.

Can labour save NDP from backroom boys?

Horwath’s Second Chance by Ellie Kirzner (NOW, November 20-26) provides a trenchant account of the dilemma faced by a party dumping its vision and cutting off its roots in the false belief that it would gain electorally.

Missing, however, is the fact that it was largely organized labour that spoke boldly in bringing the party brass to account. Horwath’s admission that the labour movement was the New Democrat’s “foundational partner” made it clear that the NDP is a class party just as much as the Liberals and PCs.

Still, the question remains: when will the labour movement replace the wavering careerists and backroomers who now run the party?

Letters To The Editor race