NOW MagazineNewsLetters To The EditorLetters to the Editor: Week of December 18

Letters to the Editor: Week of December 18 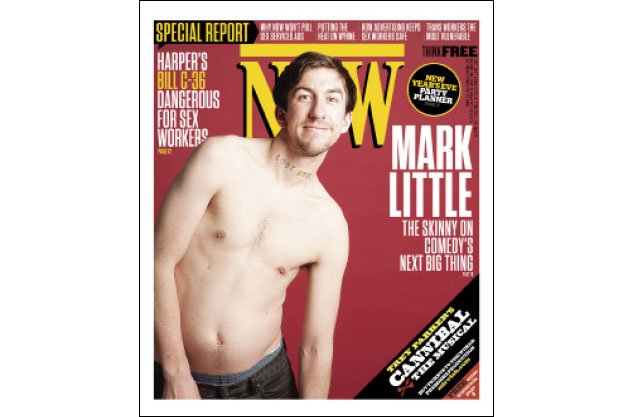 How we can do better by women

I really have a hard time understanding how a magazine with such a strong social connection could decide to oppose the government’s ban on advertising sex services (NOW, December 11-17).

And could even consider not complying. Why should someone have to sell themselves to afford to live freely in our society?

The women who were sacrificed 25 years ago in the Montreal massacre simply because they wanted to move forward in a typically male-dominated profession should not have those following them still picking among the ruins to eke out an existence in a dark, dangerous work environment.

We can do much better by them.

Taking Harper to task over the tar sands

I agree with Naomi Klein that Big Oil is in trouble (NOW, December 4-10). It must be somewhat embarrassing to Harper that he has to be singled out and urged by UN Secretary-General Ban Ki-moon to get his head out of the tar sands oil.

Let’s remember this obvious fact: Harper is the main lobbyist and supporter of Big Oil, especially the tar sands pollution disaster. He and his neo-liberal asshole cabinet are a clear and present danger to Canada and the world.

He should be charged with crimes against the climate! It’s time for lots of non-violent public protests from coast to coast to coast.

Stephen Harper’s convenient unilaterally declared war on ISIS led ISIS sympathizers to war on Canada. Harper called them terrorists (NOW, November 13-19). As a former member of the Progressive Conservative Party of Canada, I am offended by Harper’s misappropriation of the term in service to his abuse of our troops and to finance his wrap-himself-in-the-flag re-election campaign. When it came to the victims fleeing Assad’s war in Syria, Harper did nothing. I contend that Harper’s ploy to war is responsible for the recent attacks on our soldiers.

NOW should not be honouring Black Friday (NOW, November 27-December 3). Black Friday is a disgusting American import that celebrates ignorant and rampant consumerism.

Black Friday should be reworked into a day of remembrance for all those who will go with-out this holiday season – particularly the 1.3 million Canadian children who live in poverty.

NOW should instead encourage your readers to buy nothing and donate whatever they can to food banks. Not that food banks are a solution, but these charitable organizations do at least continue to provide a stopgap.

Let’s get serious about poverty

Christmas is coming, and many people are getting ready to donate to food banks. Thank you! A new supply of food can’t come soon enough. Business is booming at the food bank at the church I serve, with new people showing up every week and supplies precarious.

Can we do something extra this year, though? Can we get rid of the need for food banks? Charity is not a good way to distribute food. Trust me on this, or go by a food bank to see how dispiriting it might be if you had to use one, no matter how hard volunteers work to make them welcoming and safe places.

My suggestion, if you are planning to donate food or money to food banks this year: take the time to write to your MP and your MPP as well. Tell them to get serious about poverty, food security and housing security.

No to vote for permanent residents

Jonathan Goldsbie has taken a generally constructive approach to the issue of white privilege and the ethnic makeup of city council (NOW, November 27-December 3). I can solidly get behind four of his five suggestions to help make council more diverse. A ranked ballot system is simply more democratic, and it would be a good idea even if we were not concerned about the degree to which visible minorities are represented on city council.

We shan’t be putting any esteem in a publication that whines about “white privilege,” then pages later gleefully displays the mutilation and scorching of innocent pigs (NOW, November 27-December 3). To summarize: majority-white, democratically elected council = bad merciless, unnecessary slaughter of gentle, innocent pigs = good. Have I got it right?

Ha! Rob Ford had you fooled

Re Meet The New Boss… (NOW, December 3-11). Surprise, surprise. And you thought it was Mayor Rob Ford who screwed things up at City Hall. Have you taken your blinders off yet? Can you see that it’s the councillors and bureaucrats who run the show?

Ugh, the concert crowds in this city

I’m sorry to waste your time with this already known fact, but, Jesus, the crowds at shows in this city are the worst. What is wrong with us? Do you know that touring bands make fun of Toronto crowds? I bet you do.

It needs to be said because it’s a reflection of the scene in this city. People are fucking fake. Spoiled and fake.