Review: Lez Zeppelin and Vag Halen at the Phoenix 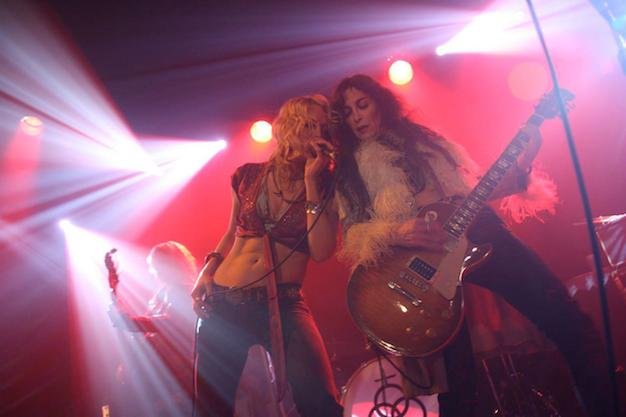 For us over-thinkers, it’s a bit of a mind fuck to see talented women devoting their musical lives to playing songs written by already overglorified male “rock legends” who slightly switch places with each other annually in Classic Rock Magazine Top 100 lists. Seems a waste.

Lez Zeppelin and Vag Halen take different approaches to the cover band premise. The former have put together a pro stage show: Marshall stacks, flashy capes over sequined crop tops, note-perfect delivery, hip-thrusting moves that ape Plant and Page (and equally gratuitous guitar solos – in Dazed And Confused, Steph Paynes traded in her guitar pick for a bow à la Page, whipping it around like a spell-casting wizard while thumping it against the strings wildly).

Vag Halen are darker, angrier and more art school in concept and execution. They follow up Sabbath with Van Halen, Guns N’ Roses with Nirvana in a melting pot set list that makes little sense historically or stylistically. Undeniably choice tunes, though, that the large crowd ate up. The needlessly large ensemble performs grimly, aside from Vanessa Dunn, whose low, sexy vocals, see-through outfit and raunchy persona stole the spotlight.

Actually guest performer Kitty Neptune stole the spotlight. Her no-holds-barred striptease with an audience volunteer during VH’s reliable cover of Screamin’ Jay Hawkins’s I Put A Spell On You gave the set a jolt of danger, subversiveness, shock and hilarity. That’s what Vag Halen do best: taking classic rock hedonism and turning it on its head.