Opposition parties are muscling into some heavy-hitting media moments 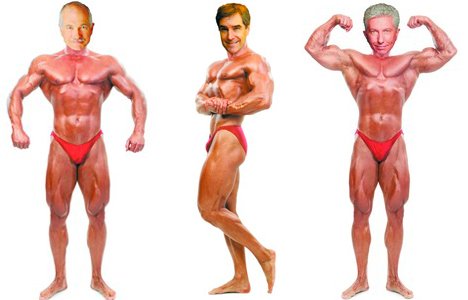 We all know the polling numbers suck. But one week into the campaign, I say hats off to all three federal opposition parties.

Instead of the usual transparent partisan calculations, they’ve given us an election about issues that actually mean something. Even more shocking, they have to some extent broken through the media barrage with their message.

So far, the writ-dropping contempt charges have just revved up the Tories’ fiction fever. Our PM started the campaign by alleging that the contempt charges he faces are mere partisan quibbles. But how does that jibe with the fact that this is the first time in history a government has fallen in this way? Then he suggested that going to the polls is in some way economically destabilizing, raising the spectre of our “fragile global recovery.”

Here we are: a blatant lie. Actually, spending money on an election is stimulating for the economy. (In fact, all government spending is economically stimulating, which is why it was universally applied as a remedy to the global financial meltdown.) Conducting a vote (an estimated $270 million) costs a pittance compared to a G20 meet or fighter aircraft. But it sets off lots of other private spending and creates new temporary jobs that increase spending volume and add tax revenue for the gov.

The expense downside is deficit spending. So here’s the democracy issue poking through again. Harper thinks an election is a waste of money, but $50 million on a propagandistic ad campaign to hype their stimulus spending is sound. Sad, isn’t it?

As expected, Harper has done all he can to disinform us about our constitutional rights with his continual “coalition” ravings. Pretty much every constitutional expert in the country has weighed in very clearly on this issue, affirming the legitimacy of coalitions in our parliamentary system. Top dog parliamentary scholar Peter Russell has even convened a high-powered think tank to work up a how-to handbook just in case. One reason he cites is the need for the media to be better informed so they won’t just pass along a misleading partisan perspective without challenge.

Delightfully, here’s where the opposition parties have finally got some sunshine for the media hay they’ve made over Harper’s hypocrisy. My favourite press moment so far was watching the Bloc’s Duceppe read the 2004 Harper letter, co-signed by Gilles and Jack, asking the GG to “consider all options.”

Layton has played the issue to great effect as well. Unlike in earlier campaigns, Jack seems to understand that his base wants him to focus on unseating the Tories and exposing their hypocrisy rather than beating up a weak Liberal leader, or at least that’s what this week’s campaign in the prairies and out west seems to foretell.

It is too bad the NDP pulled back from its anti-corporate-tax-cut stand, leaving this high ground to the Liberals alone, because this has left the party without a big-picture focus. The remedy for the NDP’s drift toward retail politics with a sort of opportunistic feel will not be seen in this campaign. But Jack has thankfully avoided using his charismatic charm to posture as PM. That’s sweet relief.

It’s been hard to see Layton taking personal hits to his health, leaning on his brave spirit to push his struggling body onto the hustings for us. But in the vulnerability of his current situation, the NDP leader reminds us of the old days, when his self-presentation felt utterly authentic during elections.

But please, Jack, take it a bit easier and let some of your very able and impressive caucus members do some of the heavy lifting this time. It would be good for the party as well as your health. Just look at the Liberals. Well-seeded succession-planning offers obvious long-term advantages. This is not a dis, just an obvious springtime reflection.

While they have all done well, it’s actually Liberal leader Michael Ignatieff who’s shown the most surprising muscle. Only time will tell if this can turn some numbers his way, but Ignatieff showed courage in drawing a line in the sand over the corporate tax cut issue.

It’s a brave wedge that highlights a smart and confident approach to the economic issues we face. And he was rewarded for it with some miracles of timing that brought so many dramatic Harper issues into the public eye all in the same week.

It’s beginning to seem that the Liberal leader has lost his phobia about all things progressive. In fact, he’s actually started to use the word to describe himself.

Old-school liberalism did stand for important things like human rights, social inclusion and respect for the democratic tradition. But the decimated Liberal party, added to the isolation of Quebec progressives from federalist parties and a unified hard right, have created a breech in the country’s value system. Now there’s a glimmer of hope that Ignatieff is finding his way to voicing these critical precepts and getting them back into the political mainstream. He is actually looking like he believes in something.

No question, election therapy is a tough pill to swallow. Maybe the polls won’t reward the Liberals and NDP on voting day, but outcomes are fluid and it’s way to soon to judge. Huge numbers of citizens do not vote. The real test will take place in only 10 per cent of Canada’s ridings. Those are the wild cards, and it’s far too early to know who or what will energize the electorate – or not.

As in the last election, a citizen movement is stirring. A new organization called Catch-22 (catch22campaign.ca) is launching this week. LeadNow, based on the MoveOn.org model in the U.S., is promising to make a difference in this campaign. The voteforenvironment.ca group from last election, of which I was a part, is revving up a new campaign called ProjectDemocracy.ca later in the week. Videos and Facebook pages are taking shape.

The upside of these dangerous times is that citizenship matters. On the ground, we need to find our way to innovation for this nation.3