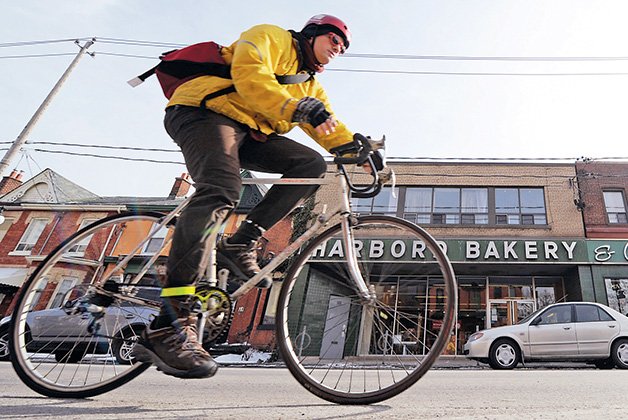 Progress on our bike lanes shouldn’t take longer than constructing the world’s tallest building, but Mayor Rob Ford has put the brakes on our Bike Plan, making the wait time for at least one lane three years and counting.

The CN Tower was built in three years, from 1973 to 76. Sadly, after three years, protected bike lanes on Richmond and Adelaide have only reached the pilot project phase. The city is only now making the real changes paving the way for the corridor, though it was first proposed in the 2001 Bike Plan, then studied further in an environmental assessment in 2011.

Our on-street infrastructure has scarcely changed in five years. Backpedalling on bike lanes, Ford and his former allies removed them on major arterials like Jarvis, Pharmacy and Birchmount in 2011. The same year, however, Sherbourne was upgraded from painted to separated lanes.

Things look different south of the border. Chicago went into high gear in 2012, adding 54 kilometres of bike lanes. The streets of New York were transformed in the last six years by cycling and pedestrian pilot projects.

Rather than lengthy studies, we need to embrace the use of pilot projects the way Ottawa has. Instead of waiting for an environmental assessment, Ottawa installed the Laurier Avenue protected bike lanes after a community response and evaluation phase. It was made permanent two years later.

Stand at the corner of College and Spadina come April, and you’ll see a city in transition. Despite the hazards of getting doored, falling in streetcar tracks or getting sideswiped by cars, Torontonians are riding bicycles in record numbers. Cycle Toronto’s own counts on College last fall captured this dramatic change for the first time: College moved more bikes than cars in a one-hour period during rush hour.

Studies suggest the number-one issue preventing year-round ridering is danger. A 2009 Portland study found that while 1 per cent will ride anywhere in all conditions, 62 per cent will ride on park paths, physically separated bike lanes and low-speed roadways. The Toronto bikeway network proposed in 2001 included painted lanes, trails and signed routes, but in the past 13 years, physically separated bike lanes took the lead as the primary design option for arterial roadways.

We need a commitment to a minimum grid of protected bike lanes on arterials like Richmond, Adelaide, Bloor-Danforth, Yonge, University-Avenue and Eglinton. This grid should also provide vital connections to all new and existing transit lines.

According to the 2012 Pedestrian Death Review compiled by the Office of the Chief Coroner of Ontario, when pedestrians are hit by a car travelling at 50 km per hour, they have an 85 per cent mortality rate. At 30 km per hour the rate decreases to less than 5 per cent. Similar fatality rates are noted for cyclists.

The updated Bike Plan should identify a network of streets to be quieted by reducing speed limits for motor vehicles and adding other traffic-calming measures. This is not only crucial for school zones, but also for vital connections to the grid of protected bike lanes.

We also need to have a conversation about what works in different parts of Toronto. Chief Planner Jennifer Keesmaat’s Draft Bicycle Policy Framework is a step in the right direction. A minimum grid of protected bike lanes, speed reductions and more pilot projects will help get us there. But we also need to invest in political leaders with the vision to lead the way.