NOW MagazineNewsLife is a cab array

Life is a cab array 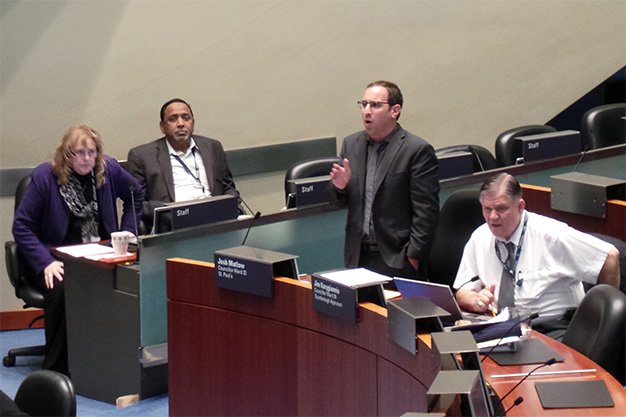 The City of Toronto wants to “level the playing field” for the taxi industry and Uber. They hope to achieve this through proposed regulations that would simultaneously create new rules for Uber and loosen current standards for taxis.

Uber is merely annoyed by the proposals, but the taxi industry is livid about them – the city would be granting legitimacy to UberX’s currently illegal fleet of unlicensed pseudo-cabs piloted by a casual workforce of non-professional drivers.

And so at City Hall last Thursday and Friday (April 14 and 15), council’s Licensing and Standards Committee heard 60 deputations across 12 and a half hours about how the hell they should proceed.

Here are five way of looking at the debate, as encapsulated by five quotes from the meeting: 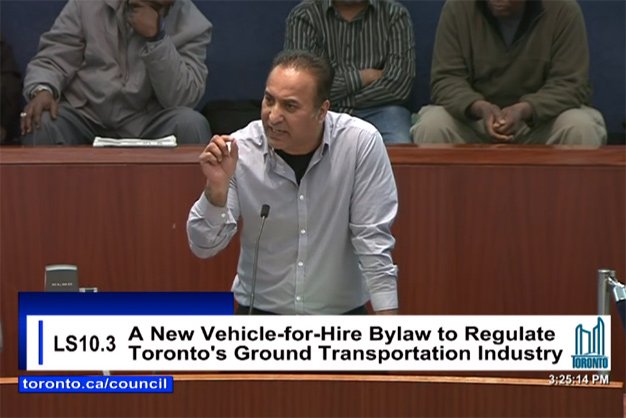 “How come you guys want to regulate a company who does not believe in regulations?” – taxi plate owner Javid Wali

It’s a key question about which Toronto has to make up its mind. Uber’s business model is premised on entering new markets with sufficient speed and impact that it overwhelms or evades municipal efforts to enforce existing bylaws. Then, having established its service in defiance of or outside existing regulations, the company leverages its newfound popularity to lobby for rules that do accommodate them. The idea, essentially, is that it’s easier to ask for forgiveness than permission.

The euphemistic business term for this is “regulatory arbitrage,” and there’s some recent precedent in Toronto. Starting in the early 90s but ramping up after amalgamation, outdoor advertising companies took systematic advantage of the fact that the city was both unable and unwilling to enforce its own sign bylaws. Happily running roughshod over the rules, a handful of companies made enormous sums from around 1000 billboards that lacked proper permits. The responsibility for enforcement was split between a couple city divisions, but neither was set up to tackle infractions on such a large scale. And in the rare instances when the city would invest the time and effort to take an illegal sign to court, the best-case result would be a negligible fine.

In the late 00s, however, a coalition of public-space activists (of which I was one) successfully pushed council to stand up for the city’s dignity by passing sweeping reforms to bring the industry in line. These included a tax on legal signs that would cover the cost of comprehensive enforcement, with the remaining funds distributed to arts organizations. Even many councillors who were ideologically or aesthetically sympathetic to outdoor advertising were deeply frustrated by how the companies had systematized their disrespect for the city’s authority.

But there are at least a couple of crucial differences that make the Uber situation more challenging. One is that Uber is a single company with a reasonably mature and practiced government relations strategy. The billboard industry, on the other hand, consisted of a half-dozen players that had spent years screwing over each other. The other big distinction is that outdoor advertisers have no organic constituency to advocate on their behalf – imagine if Uber’s champions were limited to just the company and its drivers. 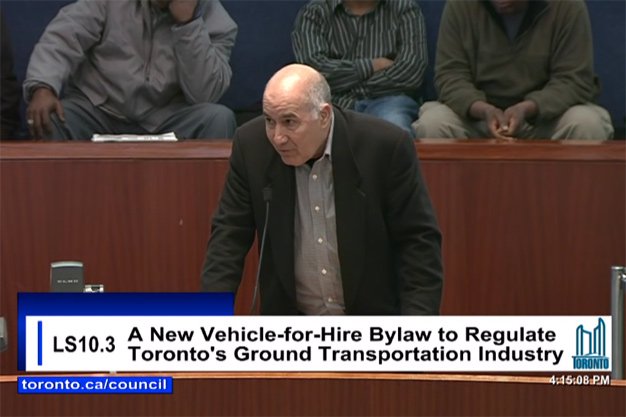 “Do you think anybody cares what we think?” – taxi driver Majeed Shidfar

In response to a question from Councillor Janet Davis asking whether anyone in the taxi industry had actually asked for the proposed lower safety standards, Shidfar expressed the above more in sadness than in anger.

Earlier, Wali put it more bluntly, rejecting the notion that the new bylaw would create a level playing field: “It’s a joke. Believe me. Don’t make fun of these great people [the taxi drivers watching in the public gallery]. It doesn’t matter if they are brown, they are Sikh, they are Muslim! They are human beings! Don’t insult them!”

The issue of race (and nationality and creed) is seldom directly addressed in the taxi discussion, but it’s a large one that bubbles underneath. By no means is the taxi industry exclusively composed of people of colour, nor are UberX drivers and its customer base exclusively white.

But the fact that when a deputant stepped up to the mic, you could guess with reasonable accuracy what side of the issue they were on by their accent strongly points to this being a deeply racialized debate.

As former Globe columnist John Barber tweeted during a cab protest last December, “This taxi thing is not just a taxi thing. It is the rage of an immigrant underclass being treated like shit.”

It’s people who drive cabs up to 18 hours a day – sometimes because their professional credentials aren’t recognized here – being outraged that the city is considering giving in to a San Francisco tech company that’s able to offer a cheaper alternative by driving down safety standards and workers’ ability to earn a living. 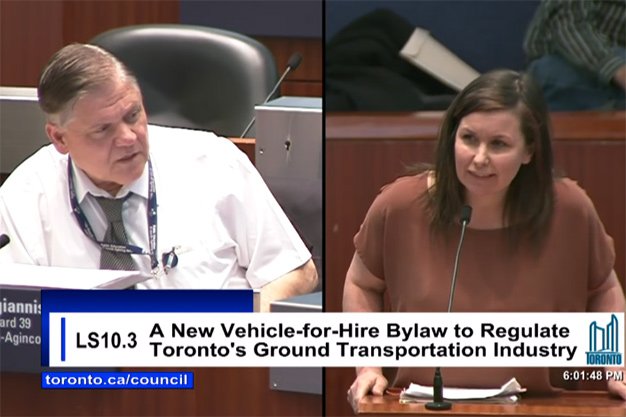 “You’re a mother of three, so you must be very responsible.” – Councillor Jim Karygiannis to deputant Siobhan O’Shea, an Uber driver

Gender is another neglected angle.

While any city staffer responsible for a report with these recommendations would’ve been vilified by the taxi industry, Municipal Licensing and Standards head Tracey Cook gets it especially bad as a woman. At the meeting, many deputants insisted on making their derision personal, with one even suggesting Cook had bipolar disorder. Cabbies in the gallery would laugh when Councillor Josh Matlow would interject to call on the chair to rein in such comments.

When UberPool driver O’Shea, who described herself as a single mother, spoke in favour of the service’s conduciveness to female drivers, anti-Uber councillor Jim Karygiannis questioned her about whether as a responsible mother she shouldn’t be more concerned about insurance requirements.

This prompted Matlow to once again rise to urge the chair to do his job. “Point of privilege: a member is lecturing a deputant about her responsibility as a mother. Would you please address this?”

To which Karygiannis responded with his own point of privilege: “As an individual that has five daughters and a wife, I think I’m very responsible…” etc.

Business consultant Ryan Malfara, one of the few pro-Uber deputants with no direct affiliation, spoke glowingly about how the brand connotes safety for female passengers. “When I can see that my girlfriend landed in San Francisco, and I can see her Uber driver and track it live – I know exactly where she is. I know exactly whether they’re taking the most direct route.”

Only following nervous chuckles from the gallery did he seem to realize how creepy this came off. 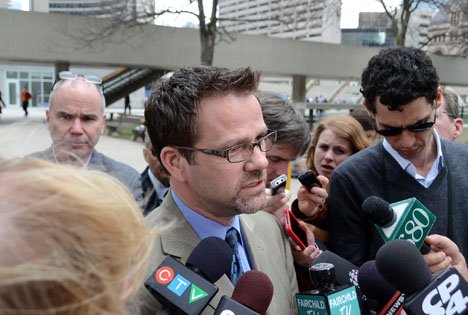 “It’s not in the public interest to exacerbate rising income inequality by succumbing to market pressure to reduce the income of taxi drivers.” – CUPE Local 79 president Tim Maguire

For better or worse, taxi issues consistently result in councillors’ most extensive discussions on the subject of labour. Even the city’s own union contracts only come to council after being ratified by employees, so there’s usually little left to debate in public.

This means that taxi matters force councillors to grapple with fundamental questions of work in a way few other issues do: Who benefits from labour? Who is being exploited? How can a system be made fairer to improve workers’ conditions and allow them to enjoy more of the rewards of their effort? The city may not be the taxi drivers’ employer, but councillors tend to be very aware that the livelihoods of thousands of workers are directly contingent on the decisions they make.

The complication, of course, is that councillors are chiefly responsible to their constituents at large, and the public’s interest may not always precisely align with that of a given group of workers.

“It is a privilege to be a member of the Licensing and Standards Committee.” – Councillor Josh Matlow on Twitter, partway through Thursday’s lunch break

For as long as the Licensing and Standards Committee has existed, it’s been a place where the day’s mayoral administration has slotted some of its least favourite councillors. Under Mayor David Miller, its members included Rob Ford, Mike Del Grande and David Shiner. Under Mayor Ford, it had Paula Fletcher, and almost Gord Perks. Now under Mayor Tory, it has Matlow, whose tweet above was presumably meant sardonically.

This isn’t because its job is unimportant – heaven knows there are less consequential duties – but because its business has always been disproportionately occupied by taxi issues. No other standing committee is similarly dominated by a single Sisyphean mission, and it’s likely a large part of why the body was established in the first place. (Prior to the 2006–10 term of council, Municipal Licensing and Standards fell under the mandate of the now-defunct Planning and Transportation Committee.)

In other words, it’s long been a committee of people who would rather be elsewhere, and for those members who selected it as their first choice – Cesar Palacio, Glenn De Baeremaeker and Frank Di Giorgio – you have to wonder why. (All three received substantial contributions from taxi plate owners in the 2014 election.)

In the end, the committee voted to strip out giant chunks of the report’s recommendations, including those that would’ve legalized UberX – but none of that matters, because city council has the final say and will have the whole debate again (minus the deputations) early next month.