How to break into construction trades in Ontario 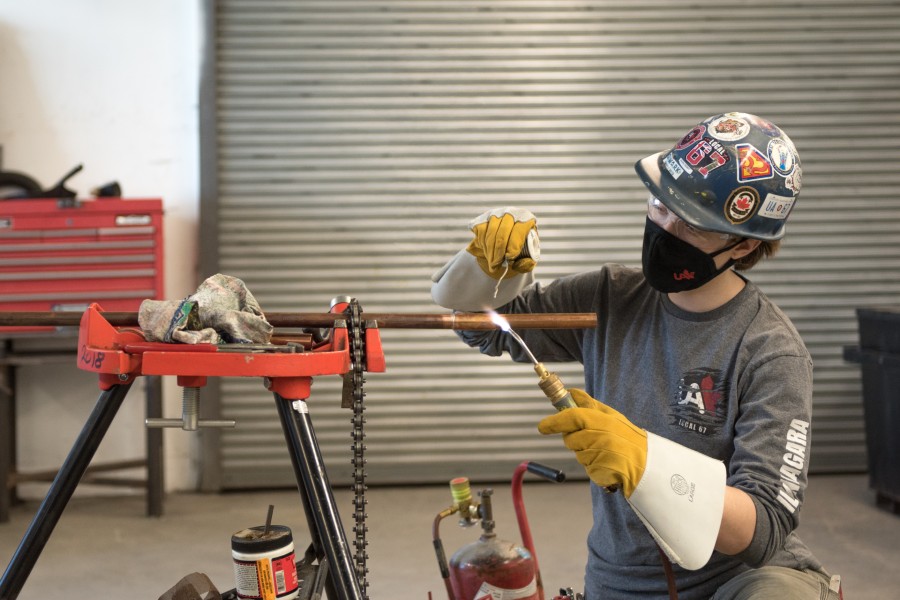 Rachel Hesketh tried out plumbing, steam fitting and welding through an apprenticeship program before settling on plumbing.

For young people trying to decide on a future career path, or others looking for a career switch, construction trades unfortunately still aren’t high up on their list of options in Ontario.

But with a constant demand for workers that will only grow with approaching retirements, current trade workers are trying to change that narrative.

A 2020 Buildforce study found that more than 257,000 construction workers are anticipated to retire by 2029, while the industry is only expected to grow by just over 50,000 workers. Anticipating a job shortage, Ontario recently announced more than $1 million would go toward the Christian Labour Association of Canada to cover the costs of 300 construction workers who want to take online training for leadership roles.

Dale McGavin, director of training at UA Local 67, which represents the plumbing, steam fitting and welding trades, says the industry is always booming. “There’s always a shortage and we’re always looking for people.”

The key to filling that gap in the industries is not just finding bodies to fill the field, he continues, but finding people who have the “right mentality” about the job and understand that it’s a real career path.

“People look at the trades as a fallback, and there’s stigma that it’s not an academic field,” he says.

There is intensive post-secondary training even within apprenticeships for these trades, and the industry requires a different type of learning, such as learning the language necessary for understanding blueprints.

McGavin says it’s common for people to come from an academic background into the trades when they realize they have a passion for it. “For some, the end all goal isn’t to be a qualified tradesperson; they’ll move on, they’ll get into management, they’ll get into estimates,” he says. “People can create their own businesses.”

Why become a trade worker?

Rachel Hesketh, who now works as an apprentice plumber after trying out a few different trades through a pre-apprenticeship via UA Local 67, was working as an early childhood educator before changing career paths.

She says the stigma around the profession is what originally stopped her from considering that career path, acknowledging that it’s something she never thought she could go into. But the pre-apprenticeship program was specifically geared towards bringing more women into the trades, so she felt more encouraged to give it a try. “It was just so different than what I had ever done before,” she says. “I loved it, it helped satisfy that need for learning.”

Hesketh enjoys the practicality of plumbing because plumbing issues are a “constant” so there’s always something new to learn. “I love how different every day can be and how much problem solving and adaptability is needed just to get through a day, or even a task. It definitely keeps things interesting,” she says.

Trades are a “humbling” profession, she adds, because of the challenge of something new every day.

“You realize how much you don’t know, and it’s that constant opportunity to learn that I love,” she says.

What are the drawbacks?

Hesketh says that while things are changing, it’s still tough being one of only a few women on the workforce. “I’ve been the only woman on the job site before and I find that challenging,” she explains.

Only around three per cent of the on-site construction workforce in Ontario are women. “It’s changing,” Hesketh says. “We’re not trailblazers anymore, there have already been those women working in the field.”

McGavin adds there’s a misconception around safety concerns when it comes to job sites for construction trades, but he says unions commit to rigorous training for workers.

“People joke around about how many safety orientations they have to do, but it’s so bred into you at that point that when you’re at home with your kids, you can actually see what’s going to happen before it’s going to happen, because that safety awareness becomes part of the culture and part of who you are,” he explains.

How do I become a trade worker in Ontario?

For those interested in working in the construction trades, there are options even during high school to get your start in the field. Students can start an apprenticeship or co-op if they’re at least 16 years old in Ontario. You can also take free pre-apprenticeship courses if you’re in your last two years of high school, about to go into college or in college, or even if you’re not in school at all.

Once you complete your apprenticeship, you can go on to get your certificate of qualification and further qualifications depending on the trade. Hesketh says there are extensive financial support options and incentives for those looking to pursue a trade, so that you can be virtually debt-free by the time you finish your education. Entry-level positions could start at around $40,000, with plenty of room for advancement.

Hesketh says that women – or anybody who has felt like this industry has not been marketed for them – should give the trades a try if they have even the slightest bit of interest.

“If you happen to have an opportunity to do a pre-apprenticeship program, or anything that gets you into it, even if it’s learning how to use power tools – these kinds of things that are stopping you from feeling like you can do it – just go for it. It’s not as overwhelming as it might seem,” she says.

Where to study to become a construction worker in Ontario

There’s a growing need for tech workers in Ontario

How to break into landscape design in Ontario

The rise of psychotherapy in Ontario

One response to “How to break into construction trades in Ontario”