Amchitka: The 1970 Concert That Launched Greenpeace 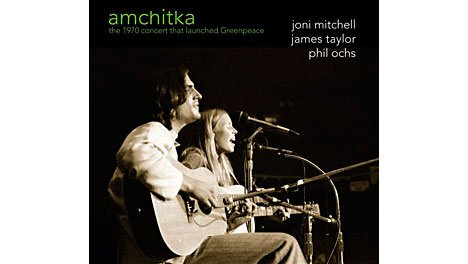 When engineer Peter J. Moore got his mitts on these tapes – courtesy of concert organizer Irving Stowe’s son Robert – he must have bust a gut. Here are pristine recordings of solo performances by three iconic artists – Phil Ochs, James Taylor and Joni Mitchell – all at the peak of their powers. Sixties geeks’ll go nuts.

Opener Ochs delivers a heartbreaking rendition of Changes, an appropriately rage-filled I Ain’t Marching Anymore (the Vietnam War was still in full gear) and seven other radical anthems – a reminder of what a loss his 1976 suicide was. Then, late addition Taylor, on the very day his Sweet Baby James went platinum, checks in with his doleful ballads.

But it’s Mitchell who’s really on fire during her 10-song set, which includes Woodstock, her paean to the counterculture. She was in the process of completing the album Blue, and you can tell she knew she had a winner in the bag. A Case Of You, which she accompanies on dulcimer, is awesome, driven by that “listen-to-what-I-just wrote” energy.

The concert launched Greenpeace’s first action – sending the boat Amchitka off to sea in an effort to stop nuclear proliferation – so there’s real history here. And album proceeds go to Greenpeace, so a sense of community remains.

Buy the CD for $21 at amchitka-concert.com/store.