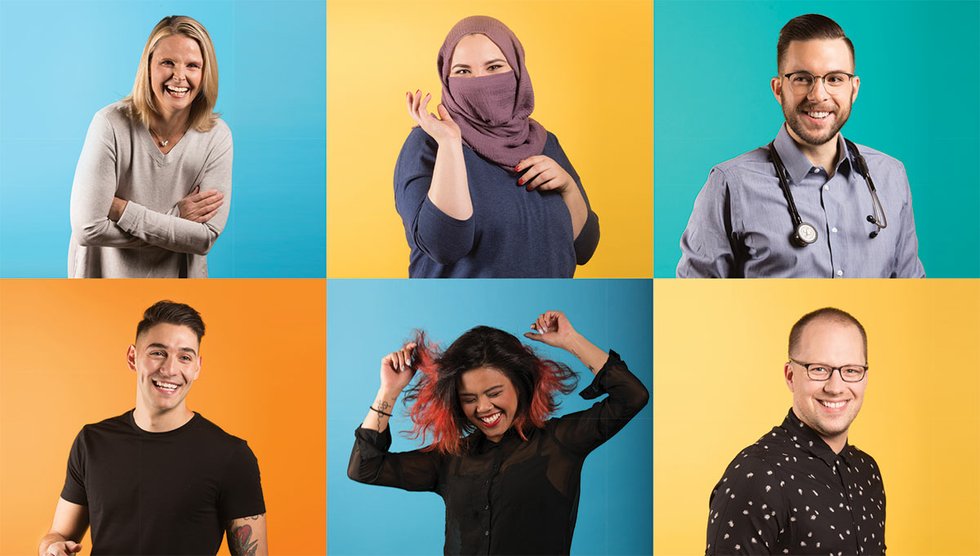 For decades, the public has had a fairly narrow perception of cannabis users as overwhelmingly male, white and lazy. Think Cheech & Chong or Spicoli from Fast Times At Ridgemont High.

These characters, who many people think of as cannabis users writ large, were meant as parodies, but much of society takes them literally.

This has not only obfuscated the diversity that exists (and always has) within the cannabis community, but also has helped perpetuate myths and misinformation about cannabis itself.

As cannabis moves closer to legalization and the mainstream, it’s becoming clearer that there’s no “typical” cannabis user.

#FacesOfCannabis, a new ad campaign by Lift.co, is challenging notions about who employs these products and their impact on users’ lives.

George Brown College professor Nancy Spotton, who appears in the ads, says cannabis was always something she was “quite hesitant about,” until she began using it as part of her cancer treatment regimen.

A hijab-wearing Muslim woman who moonlights as a mixed martial arts fighter and uses medpot for pain relief after a back injury and a young girl who takes CBD to battle an autoimmune disorder, enabling her to go to school, are also part of the campaign.

“It’s meant to show that regardless of your sex, age, orientation, profession,” cannabis can be part of your life, says Lift CEO Matei Olaru. “It turns out your neighbour is a cannabis user.”

#FacesOfCannabis was the theme of this year’s Lift Expo, an annual conference and trade show held in Toronto May 26 to 28. At the centre of the campaign is a simple conceit: that many people use marijuana products as part of their everyday lives without negative effects.

“That culture – Half Baked, can’t get off the couch, all that kind of stuff – those are things that have been drilled into us,” says Jordan Smith, head of media at Lift.

Most people think that cannabis is only a vehicle to get high.

“What you’re going to see, as legalization comes forward, is this idea of micro-dosing and cannabis as ‘life-enhancing’ rather than ‘you just get really high,'” says Olaru.

The #FacesOfCannabis push highlights the demographic shifts happening in the cannabis community, a trend confirmed by recent data.

According to Eaze, a California-based cannabis delivery service that produces an annual State Of Cannabis research report, the fastest-growing demographic is baby boomers marijuana use among millennials has actually shrunk since 2015. More women, too, are using cannabis: 33 per cent of Eaze customers were women in 2016, compared to only 25 per cent the previous year.

These sorts of shifts reflect the changing landscape of the cannabis market, which is likely to become more diverse as legalization arrives.

The other goal of the #FacesOfCannabis campaign is to provide a space for people of all backgrounds to come together. “You don’t need to feel ashamed because you’re using cannabis,” says Smith, who sees Lift’s role as “trying to elevate the conversation” on cannabis culture.

While race, religion and gender are notable facets of the campaign, one of the more interesting aspects is the way it upends class prejudices.

Just as the campaign shows cannabis users with a range of identities, another, more subtle thread shows that cannabis use doesn’t hold people back or make them unsuccessful.

This is something that Olaru connects with personally.

“Because of the way I dress, I’m not part of what people think of as traditional cannabis culture,” he says.

Lift hopes that the campaign’s success will spur more people to be open about their cannabis use. As legalization approaches, the stigmas that forced them to keep their activities hidden from public view are fading away, allowing for a more open, frank and positive discussion about cannabis.

“When I speak openly about this, I’m amazed at how many people actually say ,’I’m a user, too.'”