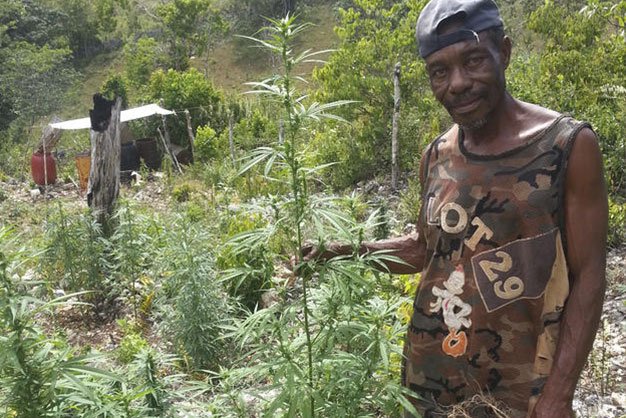 Jamaicas optimal conditions for growing cannabis have created some of the best landrace strains in the world.

Jamaica’s optimal conditions for growing cannabis have created some of the best landrace strains in the world.

Lift & Co., “Canada’s medical marijuana marketplace,” held its biggest expo in Toronto from May 25 to 27, welcoming almost 20,000 people to the Metro Toronto Convention Centre, which was surrounded by a slight haze during the three days devoted to cannabis education, product placement and trend-watching.

Billing itself as the last before legalization, the event was filled with companies poised to hit the new recreational pot market when it finally comes to Canada. Their booths took up two levels of the convention floor.

But it was the title sponsor, the Jamaican Medical Cannabis Collective (JMCC), that took centre stage.

With the support of the Jamaican government and the farmer’s collective they partner with on the island nation, JMCC has signed contracts to provide Jamaican cannabis to three Canadian LPs and letters of intent to supply seven more. All of these plans are pending Health Canada approval, of course, but there are a lot of people invested in making it happen, and for good reason.

Many patients and advocacy groups are concerned that Canada’s medical marijuana program may suffer supply issues when the recreational system opens up this summer. Legislation that allows importation of cannabis from other countries may end up being crucial to keeping supplies available for Canada’s 269,000-plus medical marijuana users.

But as JMCC CEO Diane Scott explains, it’s about more than just supply. It’s about access to a diversity of the finest product available for those who need it most – medical patients. Canada may be a cannabis innovator, establishing the first medical cannabis regime in the world in 2001, but Jamaica has a long history with the plant medicinally.

“When a [Jamaican] mom or grandma is helping a child with a cold, it’s cannabis oil they rub on their chests,” says Scott. “It has been passed down from generation to generation… the deep cultural relationship, the medicinal healing properties of the plant are all there.”

Jamaica has been a leader in the science and technology driving medical marijuana innovations since the 1970s. Dr. Henry Lowe, a Jamaican scientist and pioneer in medicinal cannabis drug formulation, recently received approval from the U.S. Food and Drug Administration for a cannabis-based drug that’s about to go into human trials to treat acute myeloid leukemia. JMCC has been chosen by Lowe to supply those human trials through the JMCC Foundation, whose mission, Scott says, is to invest 10 per cent of annual profits to assist Jamaican scientific, educational, environmental and community support programs.

Jamaica is also leading the way in cannabis horticulture, establishing a nationwide initiative to preserve the indigenous cannabis strains of the island. Leafly, the world’s largest cannabis information resource, teaches us that the specific qualities of indigenous genetics can be traced back to certain areas of the world.

Cannabis is a hearty plant that can grow in many areas and will adapt over time to its environment. Landrace strains are ones that have become almost perfectly adapted to their growing environment. Jamaica’s optimal conditions for growing cannabis (50 percent humidity, equal parts day and night, fertile soil, mountain breezes) have created some of the best landrace strains in the world. But they have an added trait – they’re disappearing as newer strains are created through hybridization and cross-pollination.

JMCC has signed an agreement with Jamaica’s National Foundation for the Development of Science and Technology to fund a 10-year study to identify, isolate and conserve local landrace strains of cannabis for medicinal use. The project will be carried out in partnership with the National Commission on Science and Technology and, in addition to JMCC scientists, will include the Scientific Research Council, Caribbean Genetics, Natural History Museum of Jamaica, the Jamaica Intellectual Property Office and local cannabis farmers, associations and co-operatives.

The overall objective of the study is to apply advanced plant biotechnological, botanical and agricultural methods to identify, conserve and protect indigenous strains of cannabis in Jamaica “to ensure they are available for future learning and medical research and development before the opportunity is lost to over-hybridization,” says Scott.

She believes it is only a matter of time before other countries will follow Jamaica’s lead on the preservation of heritage strains.

“Cannabis is expanding globally, and you’ve got deep cultivation experts in Jamaica who are up-and-coming, and it can only be better for the industry.”

Scott notes that the Lift & Co. expo has been a great accelerator for the flow of information on an international level. “It’s not just about Canada anymore – [other countries] are saying, ‘Look what a great job Canada is doing,’ and they want a piece of that.”