The queen of Canada's movement to legalize marijuana has not been afraid to cultivate her undeniable girl-next-door charm – or invite controversy – for the cause. And now, an escalating series of police raids that have shut down the Cannabis Culture chain of dispensaries she helped build may put her behind bars for a long time. But Jodie Emery is still talking about the next fight, even while others in the movement wonder if her free-for-all style is doing more harm than good. Would the cannabis cause really be better off without her? 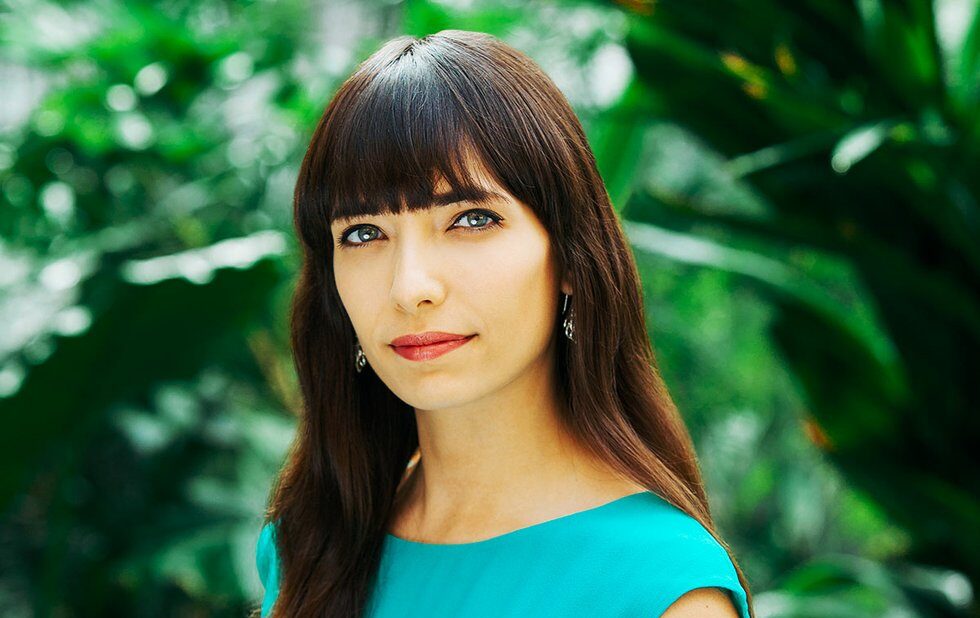 JODIE EMERY speaks at the O’Cannabiz Conference and Expo which runs from Friday, April 21-23 at the Sheraton Centre Toronto Hotel.

Jodie Emery types eagerly on her iPhone. “This is a good one,” she says.

We’re barely a minute into our interview at a small Ethiopian restaurant near the gay village, and she’s on Twitter calling out Toronto police. It’s absurd, she says, that they’re spending resources raiding marijuana dispensaries with legalization just around the bend.

Where the TPS is concerned, Emery can be forgiven for seeming a bit spiteful.

It’s just shy of three weeks since she and her husband, Marc Emery, who’s riding shotgun tonight, were arrested at Pearson International Airport (on their way to a marijuana expo in Spain) and slapped with a string of marijuana-related offences – 15 for him, five for her, ranging from trafficking to possession of the proceeds of crime to conspiracy – after raids on their Cannabis Culture stores.

Even for Canada’s first couple of the marijuana movement, who’ve been known on occasion to invite controversy, this has been an unnerving experience. Friends in the business who came to show support at their bail hearing were arrested. A relative ended up having to put up surety (her house) to get bail.

The conditions imposed for their release, which include having nothing to do with their shops, have effectively shut down their operations. Their Church Street flagship shop was officially shuttered last weekend.

Even smoking a joint could be grounds for putting them back in jail. (Our photographer asked Jodie Emery to pose with marijuana plants for our cover, but that would also prove too risky.) Emery has been forced to apply for a medical marijuana licence and buy her supply from a licensed producer (or LP), the very folks, she says, who are urging cops to bust storefront dispensaries so they can corner the recreational weed market for themselves when pot is legalized next year.

Her theory is not that far-fetched. If the smoke signals the Trudeau government’s zero tolerance pot czar, Bill Blair, has been sending are any clue, LPs stand to score big under legalization, while those who’ve been on the front line of the movement to end marijuana prohibition may be left holding the baggie.

Marc Emery, rocking that Ned Flanders-inspired green sweater he’s been photographed in a lot lately, reaches over occasionally to play with Jodie’s hair. He cracks jokes about how much she talks. They could be mistaken for any couple out for dinner because they’re too bored to cook. I have to remind myself that in legal terms I might be sitting across from two of the biggest drug dealers in Canada. At least that’s what the cops, who have singled out their Cannabis Culture stores in an escalating war on dispensaries starting with Project Claudia last May, would have us believe.

Toronto police see no contradiction in prosecuting the Emerys – or blowing a stretched police budget on raiding their stores – while the federal government is set to legalize marijuana. Toronto police spokesperson Mark Pugash says, “The only people who find that argument compelling are the people who are breaking the law.” He says of the Emerys, “I’m not sure anybody takes them seriously,” but clearly, police do.

Criticism of the Emerys’ weed exploits has also come from those within the medical marijuana branch of the movement. While some hail them as heroes, others say the couple’s opposition to any regulation is attracting the kind of unwanted heat (both police and political) that will only encourage the feds to cut out the storefront operations of others looking for a piece of the action once the legal weed market opens.

“If you just want to have a couple of puffs recreationally, well, it doesn’t come down to human rights,” says co-owner of the Queens of Cannabis Dispensary Brandy Zurborg, who was recently locked out of her store by her landlord. “It comes down to what a [consenting] adult should be allowed to do.”

The federal government is expected to table legislation on legalization Thursday, April 13. The task force charged with making recommendations to the Liberal government released a report in December that left the door open to storefront dispensaries.

But word is the feds will let the provinces work out whether that means getting weed at the corner store or your local Shoppers Drug Mart, conceivably handing the right to distribute exclusively to licensed producers currently supplying medpot patients with weed under the federal government’s Access To Cannabis For Medical Purposes Regulations. Will there be a place for the Emerys, or anyone else currently conducting business in the grey market, once legalization comes into effect?

Cannabis is now big business, a corporate game with industrial-scale growing operations for vast profits on the stock market.

Jordan Sinclair, a spokesperson for Canopy Growth Corporation, Canada’s largest LP, says, “There is a place for storefront distribution in this country, but we’ve also been vocal about the fact that it should be regulated.” In other words, it’s LPs who should be supplying storefronts. 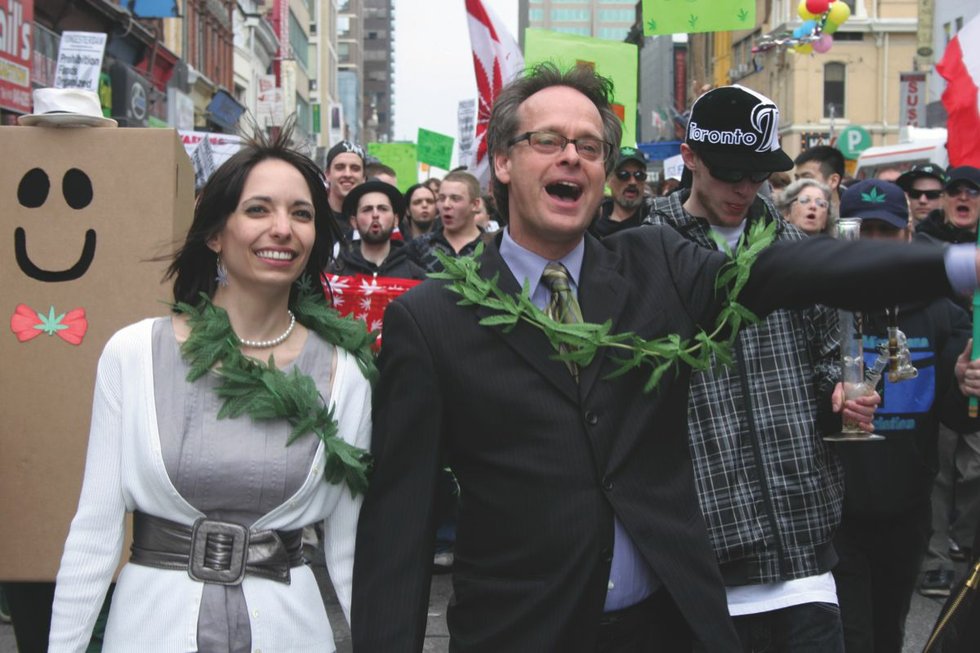 In conversation, Jodie Emery occasionally switches between “Marc” and “Marc Emery,” as if she were referring to someone other than her husband of over a decade. They met for the first time in 2004 while Marc was running for the BC Marijuana Party and campaigning in Kamloops – in a campaign bus, legend has it, that once belonged to Richard Nixon.

They became friends, keeping up their acquaintance on pot forums. After graduating from St. Michaels University School in Victoria, Jodie moved to Vancouver, taking Marc up on his invitation to get hitched and involved in the legalization movement. She was 19 and exploring newly acquired political convictions after growing up anti-drug, anti-alcohol and anti any of the other core pursuits of teendom.

Gradually, the strait-laced leadership student developed an explorative side. “I smoked pot the first night I tried beer for the first time,” Jodie tells me. “We hot-boxed the bathroom, and then my mind started to change about everything.”

She was young, smart and passionate, but still new to the movement.

In a 2005 issue of Cannabis Culture magazine, she was photographed nude, surrounded by pot plants. She was unapologetic about using her looks to further the cause.

“Sexuality is beautiful, and if beauty garners attention, then I feel I can use my assets to draw attention to my, and our, personal mission,” she said at the time. “If a pretty face sells CoverGirl makeup, then a pretty face can sell legalization.”

But it was Marc Emery’s high-profile arrest and extradition to the U.S. (he would serve four years of a five-year sentence for selling pot seeds) that ultimately catapulted her head first into the legalization movement – a fresh face, in contrast to Marc, who by the time he was released in 2014 was approaching 50 and not as social-media-savvy as the new breed of pot activists.

While Marc, the martyr, spent those years being shuttled between prisons in the southern U.S., Jodie busied herself organizing demonstrations for Marc’s release, Vancouver’s 420 celebrations and running Cannabis Culture as an above board head shop so as not to jeopardize her travel privileges. She visited him in jail 81 times, a full day’s travel each way.

It was direct exposure to the human cost of the drug war, meeting kids who’d come to visit their fathers – some of whom, like Marc, had been incarcerated on cannabis-related charges –that she says has had the greatest effect on her activism.

“When you see these big, tough men playing with their babies, and there’s all this love…,” she says, trailing off. She’s fighting back tears. “That shit, that hurts.” A silence falls over the dinner table.

By 2016, some two years after Marc’s release, the Emerys were struggling to keep their Cannabis Culture business afloat. They opened franchises and relocated to Toronto. As the police raids continued here, they remained defiant, selling pot to anybody over the age of 19. In their minds, their model – the bricks-and-mortar manifestation of cannabis for all – is what legalization should look like in Canada.

“And of course, that’s why we’re in trouble, because that’s not the legalization the government wants,” she says.

But as they face their greatest crisis, with the end of cannabis prohibition fast approaching, they have no plans, it seems, to take a breather.

What comes next? Neither thinks the charges against them will stick no judge, says Marc, will take on the hassle once legalization is imminent.

Under their bail conditions, they cannot go into a dispensary, cannot associate with the franchise they have built, can’t even smoke pot without a doctor’s note. They can’t do the one thing they’ve always done – blow smoke in the face of authority.

Last week, Brian Hutchinson wrote in Maclean’s that the legal weed industry will be better off without the Emerys. The bud business, he wrote, has “no place for free-for-all advocates like the Emerys who are off in their own world.”

What future of cannabis are the Emerys working for?

She abandons the thought mid-stream to launch into a new one: “We’re going to have to pay the price by getting arrested and going to jail, when the ones who are the perpetrators don’t suffer at all. If you’re being raided, who do you call for help?”