As a "hidden pandemic", COVID-19 doesn't evoke the same revulsion and anxiety as highly visible diseases like measles or Ebola – just one of many challenges facing public health officials 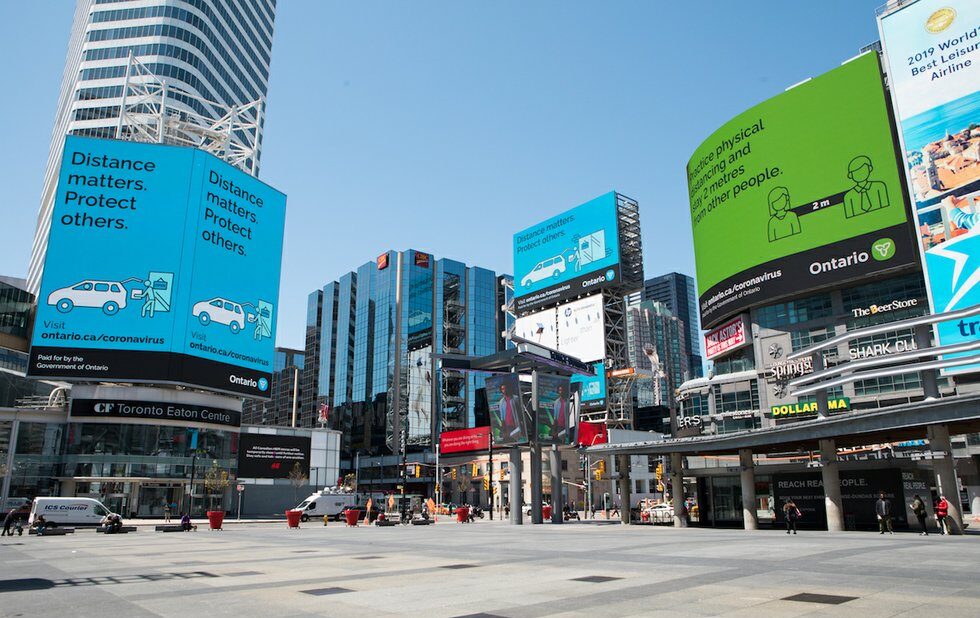 Public advisories on social distancing are displayed in Dundas Square. As Canada fights to contain the coronavirus, psychology will play a role in how seriously the public takes recovery efforts. (Samuel Engelking)

We’ve all seen images of the spiky sphere that represents SARS-CoV-2, the virus that causes COVID-19. They aren’t illustrations that conjure terror.

But consider how people might react to images of a person covered in red spots or suffering from bleeding eyes.

COVID-19 symptoms don’t evoke the same depth of revulsion and anxiety that highly visible diseases like measles or Ebola do—particularly in the age of Instagram—and it’s one of many challenges in sustaining public adherence to health measures over the long term.

Unlike 1918’s Spanish flu, where coffins, hearses, and unburied bodies were seen everywhere daily, he pointed out, we only hear about case numbers and deaths.

Taylor, who is on the federal government’s COVID-19 expert panel, said he thinks that COVID-19 is “largely a hidden pandemic”. For instance, he said an online survey he’s conducting among North Americans about the coronavirus has revealed that very few respondents personally know someone who has been infected.

He also pointed out how symptoms such as a fever or cough are not unique, and mild cases appear like any other respiratory illness, which can lead to people underestimating the seriousness of the disease.

With a background in anxiety disorders and health anxiety (formerly called hypochondriasis), Taylor, who is seeking to determine the mental-health fallout of this pandemic, found through his research that the “psychological footprint of a pandemic is way bigger than the medical footprint”.

As he learned about the role that psychological factors play in the spread and containment of disease, he wrote a book, The Psychology of Pandemics, to address the understudied area.

Depression and Anxiety, the official journal of the Anxiety and Depression Association of America, published a study by lead author Taylor and five fellow North American university researchers about individuals suffering from what they call COVID Stress Syndrome.

“These people are highly anxious about getting infected; they check media repeatedly; they seek reassurance; they’re having nightmares and intrusive thoughts about it,” he said.

“They’re worried about not just getting infected but the socioeconomic consequences – and also, these people are xenophobic.”

Taylor and his fellow researchers are trying to determine if this syndrome will persist or if it’s an adjustment reaction that will disappear as they bounce back. In his research, he found that most people are resilient but some develop “longstanding problems”.

“It’s a great unknown whether some people will come through this more frugal or tend to stockpile things more,” he said.

History, however, has been repeating itself in many respects. For example, he said he found that almost every pandemic “is associated with the rise of racism”, such as anti-Semitism during the bubonic plague.

Also, antimaskers, with a narrow focus on civil liberties that ignores safety, aren’t anything new. During the Spanish flu, for instance, he said the Anti-Mask League of San Francisco formed in 1918 when authorities tried to make masks mandatory.

“These are people who highly value their freedom and independence and then react extremely when there’s an attempt to take away so-called freedoms,” he said.  “We all have to agree to give up some of our liberties in order to manage this.”

Meanwhile, some people turn to conspiracy theories, which, Taylor said, provide “an illusion of control” during a period of great confusion.

“You can think of conspiracy theories as extreme kinds of rumours, and rumours are kind of like improvised news that people generate or circulate in an attempt to understand something important to them in which there’s a great deal of uncertainty,” he said.

These individuals, he explained, often have a conspiratorial mindset, paranoid streaks, and varying degrees of narcissism, feeling that they have secret knowledge that others don’t. COVID-19 conspiracy theories, he said, are identical to ones that theorized the Zika and SARS viruses were manufactured bioweapons.

Then there are the armchair pundits who believe they know more than the experts simply from reading online material, which could also be an attempt to feel in control of an uncertain situation. However, Taylor pointed out that we’re faced with so much information that it’s often difficult for the average person to determine what’s reliable.

At the opposite end of the coronavirus psychology spectrum are those who underreact or perceive themselves as invulnerable to the virus. “They’re underestimating the seriousness of COVID-19 and so they’re going out socializing and then paying a price for it,” he said.

“There’s often a fine line between optimism and denial,” he said.

Accordingly, Taylor said, it’s important for health officials to start addressing “vaccine nonadherence”, because there’s evidence that up to 20 per cent of Canadians wouldn’t get a COVID-19 vaccine once it is developed.

‘There comes a time when messaging hits a brick wall’

University of Ottawa health sciences associate professor Raywat Deonandan pointed out during a phone interview that there’s also the problem of people losing fear of the virus as they become acclimatized to the conditions or experience pandemic fatigue.

“There comes a time when messaging hits a brick wall,” he said.

While Deonandan said there’s “no obvious answer” to maintaining the effort over the long term, he likens the objective of pandemic health measures to seatbelt wearing and points out how campaigns raised public awareness about the death rate of vehicle accidents. He hopes that pandemic messages can encourage people to wear their masks and physically distance at the same level of frequency that people wear seatbelts and avoid speeding.

Deonandan suggested that more nuanced public health campaigns are needed that draw upon the experiences of previous campaigns, including vehicle accidents, smoking, and sexually transmitted infections.

In addition, he also recommended that more time and resources be invested in public health messaging so that they can tailor them to specific regions and demographics groups, and make them “dynamic” in order to change with time and shifting levels of fear.

Despite the impacts of coronavirus on psychology, Taylor said he thinks that everyone can benefit from self-reflection during these trying conditions.

“When people come through this, they need ask themselves what did they learn about themselves and how did they grow as a person during this?” he said. “My hope is that maybe people will come out the better for this, and maybe it’s important for people to remind themselves of this so that they’re ready to deal with the challenges ahead.”