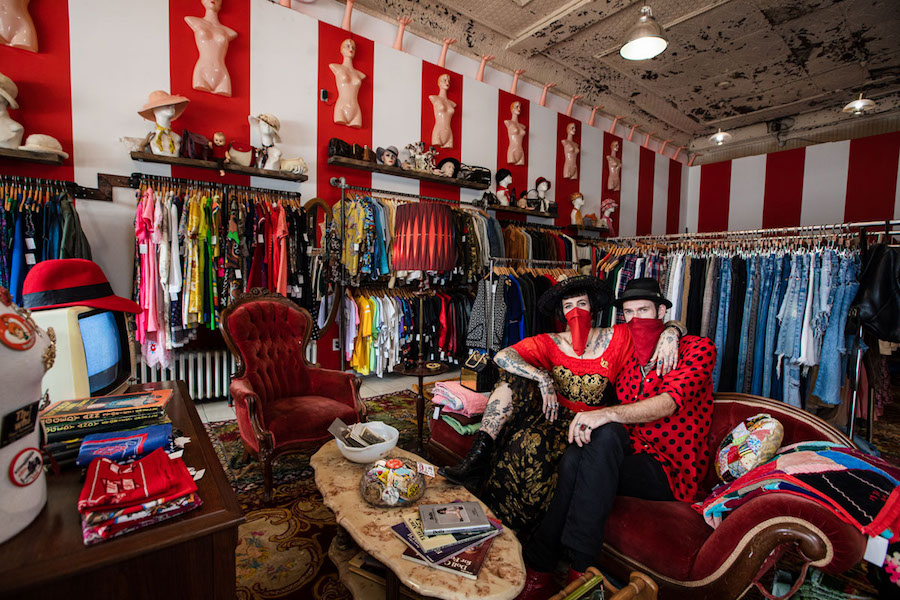 Ragdoll Vintage owners Rachel Small and Nathan Brown have opened one of the city's most eye-catching vintage shops.

If you haven’t been around 372 College lately, you might do a double take. Even more so if you go inside.
The long-time former home of the used record and book store She Said Boom is now Ragdoll Vintage, which opened in early August and is already one of the most eye-catching clothing shops in Toronto.

It’s like walking into some strange vortex of 1970s living room, creepy dollhouse and sideshow circus tent. That’s all by design (check it out on their Instagram @­ragdollvintagetoronto).

Owners Rachel Small and Nathan Brown decided to lean into a circus theme after settling on a red-and-white-stripe wall pattern and a front sign modelled on classic freak show fonts.

Naturally, there’s a big art piece of a sad clown hanging over the doorway – originally a Valentine’s Day gift from Small to Brown – and artfully splayed mannequin limbs and torsos everywhere you look. There’s a retro living room set up in the middle of the store, complete with chaise lounge, coffee table and an old TV playing The Rolling Stones Rock And Roll Circus (there’s that circus theme again).

“We’ve lost a lot of fun over the last couple of years,” says Small. “This is a small way of bringing that joy and excitement back. We wanted a place that was more than just a store, but a place people could come for an experience.”

Ragdoll Vintage is located in the former home of She Said Boom on College.

Small and Brown met at OCAD 13 years ago, drawn to each other’s sense of style. The couple’s eccentric clothing choices stood out, even in a sea of art students.

Small cites her bubbie, late Canadian opera singer Clarice Carson, as one of her biggest style influences. There are photos of her up in the store covered in sparkles and costume jewellery.

Small has worked in vintage for more than a decade, most recently as a picker for Queen West vintage standard-bearer Black Market. Brown comes from the world of bars, but when his employer City Pool shut down during COVID he decided it was time for a change. Both of them wanted to do something for themselves, and when Brown found the space on a realtor website, it was the only one they needed to see in person.

It’s been nearly two years since She Said Boom moved a few doors west on College, but the storefront has been sitting empty. When they went in to see it, they discovered an old, ornate ceiling fixture hidden underneath “ugly office tiles.” It’s gorgeous, somewhat anachronistic and also weathered in a way that gives it character – a perfect fit for what they had in mind.

That fits the clothes, too.

When I ask Small what goes into being a picker for a vintage store, she bristles: “That’s a trade secret. I can’t just reveal that.”

She does give some hints though.

As they went through a gruelling renovation process, the couple also spent a lot of time going to estate sales, wholesale markets and, when they needed a vacation, little antiquing road trips. They don’t usually buy from people coming in off the street, leaving that to buy/sell spots like Common Sort.

There’s a range of styles and prices, from $3 to $300. You can find the “classic vintage basics” at Ragdoll Vintage: leather and denim jackets, jeans, lots and lots of t-shirts. But they’re more proud of the unusual, over-the-top stuff with a backstory.

“That’s part of the joy of vintage,” says Small, “finding a really cool piece and imagining its life before it came to you: who wore it, where they went, what they did, how much they loved it.”

There are hats and purses everywhere, which reflects Small’s tastes. Her favourite rack is filled with vintage dresses, including a bunch of wedding dresses (there’s more in the back, because they’re not top sellers). She shows me one from her mother’s best friend’s mother, who wore it at her own wedding in 1951. There are wedding bells embedded right into the pattern.

For Brown, he was particularly fond of a long, brown suede jacket – “a classic Penny Lane coat” – that someone loved so much that she bought it on the hottest day of this recent heat wave and wore it out of the store.

“It’s so cool seeing people come out of the fitting room with something they’ve just fallen in love with,” he says. “And then they do a little dance while looking in the mirror because they’re so happy.”

Vintage shopping had a moment during the pandemic. That happened mostly online, as people trawled Etsy, Bunz and Facebook Marketplace for fits. A lot of people had a lot of free time, the Ragdoll owners surmise, but they’re also tired of fast fashion and its environmental impact. Even working vintage, Small has seen way too many clothes ending up in a landfill.

With 70s styles making a comeback and gendered boundaries starting to melt (“that’s my shirt he’s wearing,” Small quips), they think people are ready to ditch their sweatpants and go back to dressing expressively and with fun in mind.

“That’s one thing we will not be selling here,” Brown says. “No sweatpants.”

Small insists her passion is for the clothes, but it’s the strange, carnivalesque touches that make Ragdoll Vintage such a unique spot.

If you spend $100 before tax, you can spin a wheel for a discount or prize (land on “?!” and see what happens). There’s a little mechanical horse for kids to ride. Their opening party had a raffle and a mentalist. They’d like to find a claw machine and fill it with rolled up mystery t-shirts you won’t see until you win them.

Eventually, Brown plans to set up a dark room in the basement and a little photo studio or photo booth in the back of the store. He has an old-timey 4×5 camera that he can use to shoot black and white portraits of people in their clothes, then develop them in the basement.

He also alters cowboy boots and turns them into lace-up boots, and eventually they’ll sell a line of them in the store along with other handmade, reworked pieces like leather jackets with designs painted on the back.
“I love being able to take something old and revamp it,” he says.

“I just want people to have fun dressing up again,” Small adds.