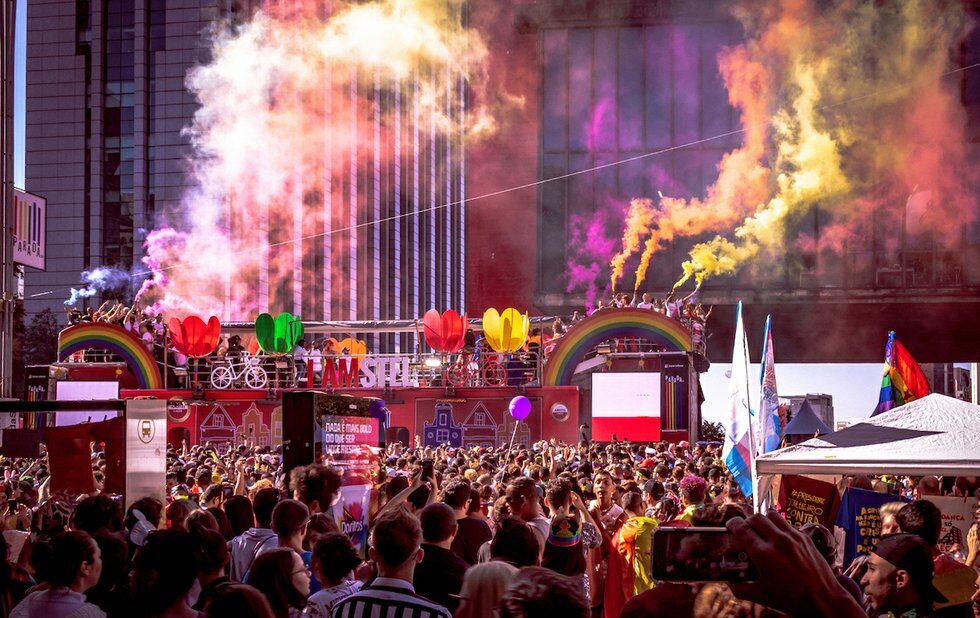 Maria Clara de Sena has lived in Toronto for two and a half years, but still receives calls from her home country Brazil with news of another trans person who has been murdered.

“The process in Brazil now is to kill us one by one,” she says during an interview at the cafe in the 519 Community Centre. “Many Trans woman have to go to the street every single day to work as sex workers to survive.”

Born in the northeastern city Pernambuco, she’s suffered abuse for her gender identity and witnessed horrifying acts – as a sex worker in Rio de Janeiro and São Paolo, and while serving on a United Nations subcommittee on the prevention of torture and rights for LGBTQ persons in detention in Brazil.

Police don’t care about trans people or the violence against them, she adds. “They say, ‘oh trans? They can wait,’” De Sena says, mimicking shutting off a phone.

Not feeling safe, even in her government role, she fled to Canada.

To help Brazilian women like De Sena stay safe from violence, a Toronto professor has developed an app called Dandarah.

“Brazil is a highly violent country, especially for women and the queer population,” says Monica Malta, an assistant professor at the University of Toronto’s psychiatry department.

Malta’s work in the area of trans women’s sexual health led to the creation of the free Brazilian-Portuguese-language app, which launched on December 18 and has more than 1,000 downloads.

Dandarah isn’t going to solve the systemic problems that lead to violence, but Malta and her research team hope it will make mental health supports more accessible.

In 2016 and 2017, Malta led the UNESCO-sponsored study Pesquisa Divas, which included 2,846 trans women from 12 Brazilian cities. All of the participants reported that they encountered violence and discrimination in many locations – at home, at work, in health facilities and on the street.

Because of this, the community Malta worked with felt an app would be a useful tool for location-based safety.

“[The transgender community] do use a lot of social media to interact with one another, but they were missing some sort of platform where they could show they were safe, and to network and look for support,” Malta explains. “They requested we develop some ideas and there was a consensus among [our] key partners in Brazil, and that’s why we went for it.”

The group that developed the app included Malta, researchers from the Oswaldo Cruz Foundation (aka Fiocruz, a Rio de Janeiro-based scientific research institution) and Duke University’s Center for Health Policy and Inequalities Research, as well as the Brazilian National Transgender Association (ANTRA) and the Brazilian LGBT Association (ABGLT).

The app is named after Dandara dos Santos, a trans woman from Fortaleza whose brutal murder was captured on a video that went viral and made international headlines in 2017. Dos Santos was a participant of the Divas study.

With financial support from Jean Wyllys, a Brazilian gay civil rights activist and former politician, Malta’s research team figured out what needed to go into the app. The community feedback led to features including a crowdsourced map that identifies risky areas and a panic button that allows users to contact five peers to offer either online or on-site support, like walking them home or bringing them to a health care facility or shelter.

A pilot run with 100 Brazilian LGBTQ­+ people living in 10 urban and rural areas resulted in the crowdsourced map also identifying safe places, like NGOs and queer-friendly health services. “Instead of only focusing on what is bad and places they need to avoid, they also have a safety net,” says Malta.

De Sena supports the app, but considers it only a start. She notes that it would be inaccessible to poorer trans women, especially those living in the country’s north. “They don’t have  water, they don’t have money to pay for internet or a cell phone to access the Dandarah app quickly [if needed],” she says.

The app’s crowdsourced map feature would be a welcome one for trans youth in Toronto, says Alex Abramovich, a public health professor at the University of Toronto and an independent scientist at CAMH who focuses on lesbian, gay, bisexual, transgender, queer, questioning and 2-Spirit youth homelessness.

“The trans community often relies on peers for support,” he says. “And in terms of accessing services, it’s very important to hear about other people’s experiences, to know whether or not you might actually access that service.”

He recently wrapped up a study across York region, interviewing youth who identified as queer and trans, and many reported severe anxiety, major depression, suicidal thoughts and behaviours, as well as being physically attacked because of their gender identity.

It’s hard to determine how much violence Toronto’s trans population experiences because it is underreported.

“I can say to you for sure that violence happens on a daily basis in Toronto, and it happens in different ways, like structural violence and institutional erasure,” he says, pointing out that key forms that could be used for data collection at health care facilities and housing programs do not acknowledge identity.

Since last month’s launch, Malta received a grant from Grand Challenges Canada, which might open the app for broader collaboration her U of T colleagues. But the focus will remain on Latin America.

There’s talk of developing an additional app with online 24/7 mental health support since “we know that violence and stigma is a key predictor for poor mental health, social isolation, depression and suicidality, and that is a great concern.

“The first step is to [walk] step by step with the community,” she says.