What if life-saving naloxone kits were accessible in public spaces? 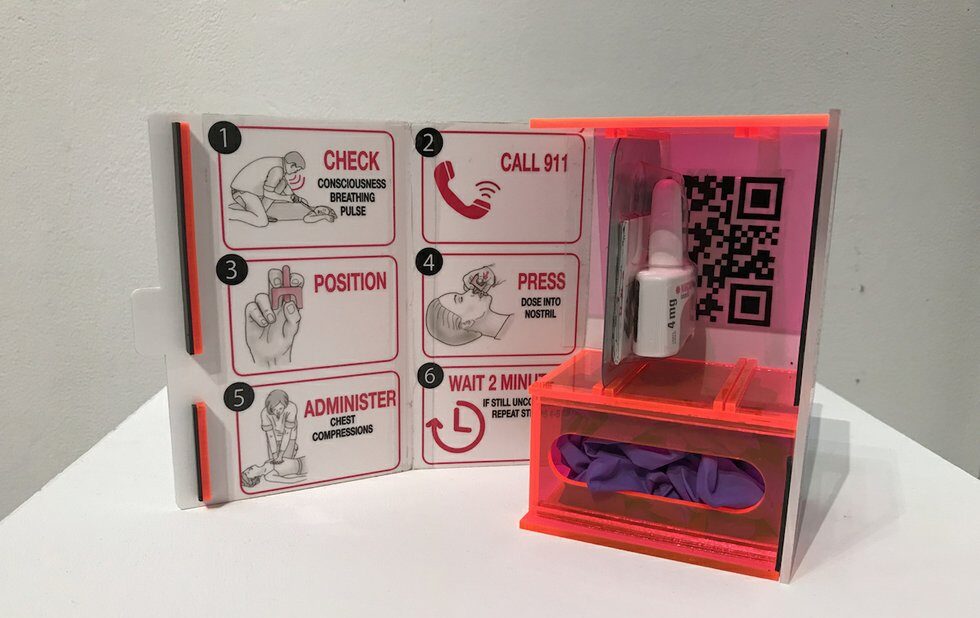 A prototype of a storage unit for NARCAN nasal spray that can be used by an untrained bar patron. It was designed by OCADU students Maddy Bailey

As the opioid crisis continues to escalate across the province, some Toronto owners are stocking their bars and music venues with naloxone kits and training their staff on how to use them.

But rather than keeping the life-saving kits behind the bar, what if it they were also available to patrons? What would that look like?

That’s the question a group of third-year undergraduate industrial design students at OCAD University tackled for their Toronto Design Offsite exhibit, Designing For Health, Wellness, Action And Destigmatization. As part of a school project last semester, the students created a series of naloxone kit prototypes designed for different environments, including public restrooms, libraries and restaurants.

The goal was to design a storage unit for the NARCAN nasal spray that clearly communicates to untrained bystanders how to administer the drug properly in the event of an overdose.

For their prototype, intended for public washrooms, undergraduate students Zoe Trommer, Lucas Bruketa and Perry Miller designed a sleek unit that resembles an automated external defibrillator. Opened via a breaker handle, the removable front panel contains the NARCAN nasal spray and easy-to-follow instructions, while a speaker within the unit connects the user with a first responder. When the breaker handle is pulled, it automatically contacts EMS.

“The number one thing we learned talking to experts is that naloxone spray can wear off and you can go back into an overdose, so you absolutely need to contact emergency services,” explains Bruketa. “We wanted to eliminate the step of having to call 911.”

Another prototype, designed for washrooms in bars and restaurants, features two doses of NARCAN and medical gloves, while a different prototype for public libraries looks like a circular first-aid kit that’s opened via a press button. The students behind the library prototype also created an augmented reality smartphone app that teaches the user how to use NARCAN, as well as provide training exercises.

Although designing a utilitarian object like a naloxone kit might not seem like the most obvious project for art school students, their instructor Wesley Chau says it requires the same kind of design thinking they’re taught in class.

“The course is designed to show students how industrial design can be applied to social and health-related issues,” says Chau. “A lot of [design agencies] work with hospitals to build better efficiencies in nursing units, the ICU or ER units. They tend to take on an industrial designer to disrupt the old ways of thinking and provide strategies on how to implement something more efficient.” 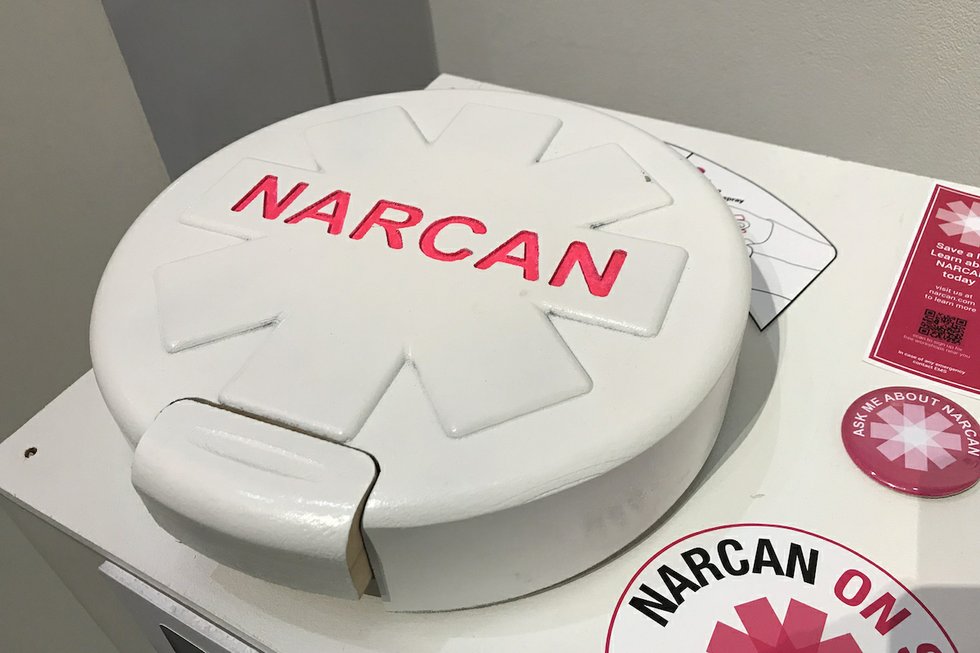 For the exhibition, a group of graduate students, who are enrolled in OCADU’s master’s of Design for Health program and exchange students from Oslo and Akershus University College of Applied Sciences, researched another harm reduction strategy that has received a lot of media attention in Toronto: supervised injection sites (SIS).

For one of their classes last semester, the graduate students created a “how-to guide” for pop-up SIS using the Moss Park site as a case study. The students, one of whom volunteers at Moss Park, determined the four most important conditions for SIS were a safe space to access support in case of an overdose, a social space that builds community trust, a space for supplies and a donation space where the wider community has an opportunity to engage with the site, which reduces stigma.

Their findings are outlined on giant boards in the exhibit and in a document that can be presented to any business, city official or potential stakeholder interested in operating a SIS.

Along with studying Moss Park, the students also looked at Vancouver’s Insite, the first legal SIS in North America, and other sites across Canada. “In Ottawa, they have a SIS inside a trailer in the parking lot of a church,” says Avital Lang, one of the OCADU graduate students who worked on the project. “They kept video games and snacks in the trailer to keep the users there, which is what the nurses and volunteers want so they can make sure the users are safe.”

Lang says it’s crucial that the sites are welcoming and heated. Otherwise users might just stay at home or at shelters where there isn’t necessarily someone to help in case of an overdose. “It’s shocking that Toronto is so far behind Vancouver,” says Lang. “Toronto has a ways to go, but I think we can make that change.”